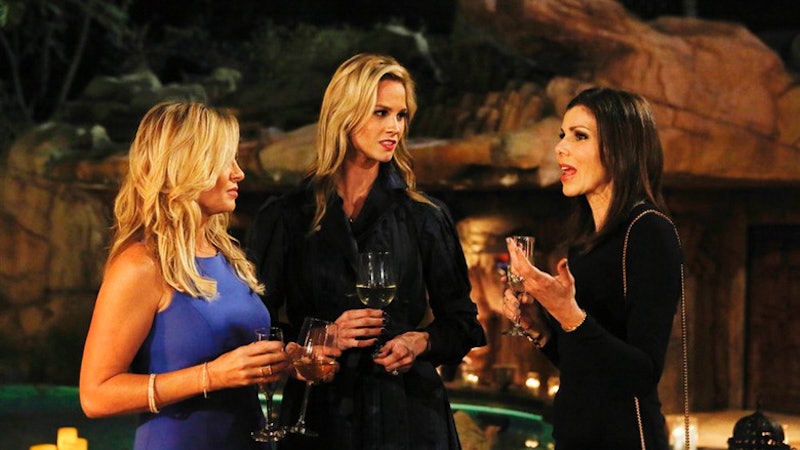 It's still early, but already, Meghan King Edmonds is taking up all of the attention on this season of Real Housewives of Orange County with her hilarious antics. But for some strange reason, some people don't agree that Meghan is an amazing addition to the cast, though I don't really see how you can argue that Meghan Edmonds' best moments of RHOC Season 10 aren't simply some of the show's best moments. Actually, in my opinion, only Shannon Beador had a better debut season on this show — even the great Tamra Judge took longer than that to become a true star of the show. Edmonds has had an impressively quick learning curve when it comes to being a Housewife. I'm surprised she hasn't thrown any glasses of wine in anyone's face, but hey, it's still early.

All of the greatest things about this season have happened because of Edmonds. Without her silly antics to liven things up, this season might have been a little too dark for my tastes. Edmonds seems more than up to the task of making things fun, even if her actions have been deemed by some too nakedly ambitious and only done to create a story. But hey, who cares what the reasoning behind them is; so much of reality TV is manipulated anyway, and it's still entertaining nonetheless. Edmonds' best moments speak for themselves, and they're nothing less than Housewives classics.

1. When All Of The Housewives Dished On Meghan Before The Season Started

The hesitant ways most of the women talked about Meghan made it obvious who she was friends with and who considered her a nuisance. Shannon repeating "she's thirty" four times is brilliant. See, Meghan inspired great reactions even before the show started.

2. That Time She Used Tamra To Deliver Her Bad News

Tamra is always gossiping anyway, and this time she played right into Meghan's plans to avoid Shannon but still exclude her from the party. A little mean-spirited, but a true power play.

3. And When Meghan Caught Heather And Tamra Talking About Her

This moment was probably orchestrated by a producer, but it sure made Meghan look like an awesome gossip ninja. I will choose to believe that she just happened to catch them red-handed.

4. When She Bonded Over Sexual Innuendoes With Tamra

Meghan and Tamra bonded over their shared loves of being blonde, drinking wine, and making dirty jokes, and it was excellent.

5. This Reaction To Shannon's Flipout

While Meghan may have prompted Shannon's angry rant about voicemail, telemarketers, and her unlisted phone number, her sideye was epic in this scene.

6. Every Time She Stuck Up For Herself With Jim

So basically every other scene not mentioned above, like when they went furniture shopping. Make no mistake, Meghan runs her house.

7. All Of Her Hilarious Faces

8. When She Discovered Her First Wrinkle At 30

I mean... she couldn't look more perfect, but at least she tries to pretend to be humble.

9. When The Pun In Her Tagline Finale Made Sense

Because Jim played baseball... OK, it was right there, but her tagline game is pretty great.

10. When She Lectured Shannon

Villainous moments can be great moments too, and this was an incredibly awkward one where Shannon basically got chastised for the whole phone fight. Somehow, rookie Edmonds managed to win!

11. And Let's Not Forget She's Fired Shots At Vicki, Too

This hasn't technically happened yet on the show... but the trailers teased the hell out of this moment, and I can't wait to see it.

The season is only six episodes in and Meghan has already had a dozen great moments. She was born to be on The Real Housewives of Orange County, and there are going to be so many more great moments from her during the rest of Season 10, from relatable, cute scenes with her family to full-on villainous moments.