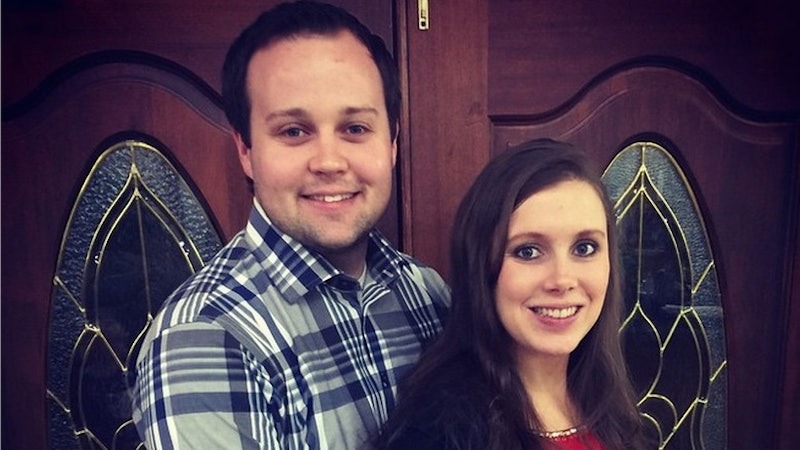 A different kind of news than usual regarding the Duggar family today. According to People, Anna Duggar gave birth to her and Josh's fourth child, a daughter named Meredith Grace, over the weekend. Josh announced the new arrival on Twitter on Sunday, July 19, adding that both mom and baby are "resting & doing well!" The couple are already parents to Marcus, 2, Michael, 4, and Mackynzie, 5.

It's certainly happy news for the family, especially in what must be an incredibly difficult time for all involved. These days, it's hard to hear the name “Duggar” without immediately thinking of the recent scandal involving Josh's alleged sexual abuse of several young girls back when he was a minor. The troubling report has caused major controversy over the family and their popular reality show; earlier this week, after what seemed like months of indecision, TLC canceled 19 Kids And Counting, the show responsible for the Duggars' immense fame.

But, back to the baby news. As per the eldest Duggar's tweets, Jim Bob and Michelle's 5th grandchild was given the traditional yet sweet name of Meredith Grace in keeping with Josh and Anna's now solidified and much talked about "M" name tradition. The tweets also explained that newborn little girl was 20 and a half inches long and weighed seven pounds and 14 ounces at the time of her birth (though pictures of the infant show her with adorably chubby cheeks). The baby also appears to look a lot like her big sister, Mackynzie, who Anna reported to People previously to be "especially excited" and incredibly proactive about welcoming her new sibling.

You can view pictures of the newborn Duggar baby below: