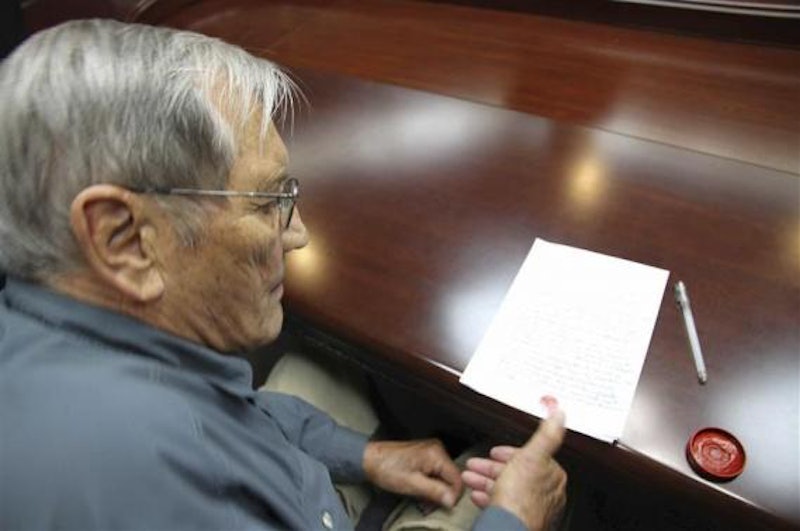 An 85-year-old pensioner from Palo Alto, California seemingly confessed and apologized Saturday for killing civilians 60 years ago during the Korean War, and no, this wasn't some strange reaction to a tryptophan overload. The statement was read out on video by U.S. vet Merrill E. Newman, who says he was "guilty of a long list of indelible crimes against DPRK government and Korean people" — but the "admission" comes after being held in North Korea by authorities for over a month.

North Korean state media, which carried the statement, claimed that the elderly vet — formerly a special forces officer — was in fact behind many covert operations that resulted in the deaths of Korean civilians during the war. "He is a criminal as he masterminded espionage and subversive activities against the DPRK [Democratic People's Republic of Korea] and in this course he was involved in killings of service personnel of the Korean People's Army and innocent civilians," the Korean Central News Agency said, adding that Newman was "part of the Intelligence Bureau of the Command of the U.S. Forces in the Far East."

In the statement — whose circumstances remain unknown — the pensioner, who suffers from a heart rhythm disorder, said he also tried to meet with other soldiers he'd trained in the Korean war and carried with him an ebook criticizing the state.

"The investigation clearly proved Newman's hostile acts against the DPRK, and they were backed by evidence," the KCNA story concluded. "He admitted all his crimes and made an apology for them."

Newman has been detained in the country for over a month now, ever since he was pulled off of an Air Koryo flight in North Korea just minutes before it was set to leave for Beijing on October 26. He'd been visiting the country for a 10-day tour which, according to his wife, was meant to ""put some closure" on his time during the army. Until today, it wasn't clear why the vet was being held by authorities.

On Monday, his wife told CNN that she hoped he'd be let go in time for Thanksgiving. "We need to have Merrill back at the head of the table for the holidays. And we ask — respectfully — for them to release him and let him come home," she said, adding that her husband had only taken enough heart medication to last him through the trip.

Since 2009, at least six other U.S. citizens have been detained in North Korea, most having been accused of propagating Christianity. Another American, who worked as missionary and tour operator, remains in the country, having been arrested in November of last year and sentenced to 15 years of hard labour after being charged with "hostile acts" and trying to topple the government. In the past, Pyongyang has been accused of coercing statements from detainees.