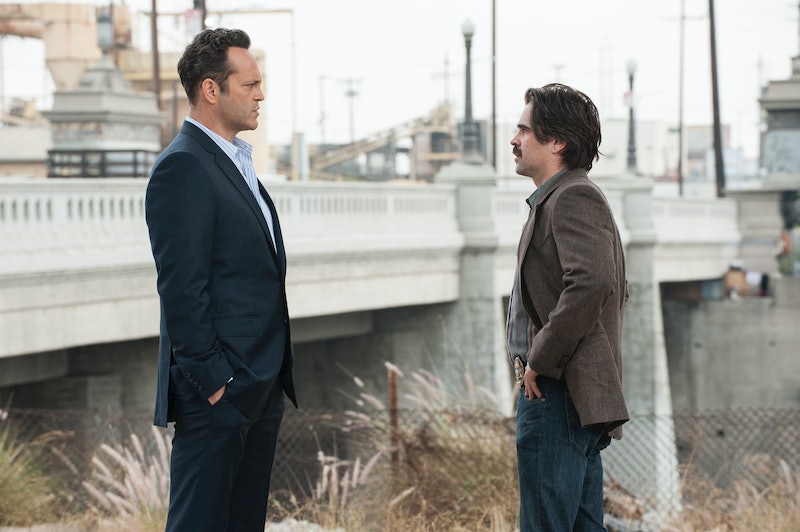 Following last week's insane shootout during the final scene of the episode, maybe it's best if True Detective just takes it easy for a week, you know? Well, that's what we got with Sunday's episode of "Other Lives." It was a slow moving episode, that saw our detectives in a brand new light, mostly because none of them were truly detectives anymore, you know? The big thing for the episode happened during the final seconds, when Ray starts banging on Franks door, and actually pulls him out of bed for it. These two guys have always been a little bit at odds with one another, but now that Ray and Frank are going to square off , what's going to happen to them now? Can both walk away from this situation?

Needless to say, Ray is not having a good week. Following the shootout, he resigned from the force and now finds himself working at Frank's casino as a "consultant." Really, he's just now freelancing as Frank's muscle, and he spends most of the episode tailing Frank's right hand, Blake. It's not too exciting.

It, however, guest exciting when we learn the episode's BIG THING. A few weeks ago, Ray's wife's assailant — the one who may or may not be Chad's real dad — was just caught. Which is interesting, seeing as how Ray's been under the impression that he killed him over a decade ago. That's why Ray and Frank are in cahoots to begin with, since it was Frank who supplied that name to Ray. And Ray killed the guy. But if the attacker was just caught — and his DNA matched the DNA from the initial attack — that means that Ray killed someone else. Which, obviously, doesn't sit well with him.

So, off Ray goes to Frank's house, to bang on the door and have a word with him. Ray's got a gun. Frank grabs his his own gun. The conversation between the two of them is not going to go well.

First thing, then who was the guy Ray killed all those years ago? Did Ray, unknowingly, do a completely separate hit for Frank? Or was this a complete accident, and Frank thought he had given him the correct name? And, how mad is Ray really going to be, when he and Frank go head to head about this? Someone needs to give Ray a hug and tell him everything's going to be alright. Did I forget to mention that he also got evicted this episode?

We're going to have to wait until next week to see if both of these men are still standing by episodes end. Something tells me someone is going to take a hit because of what's happened. But will it be unhinged Ray, or brooding Frank?