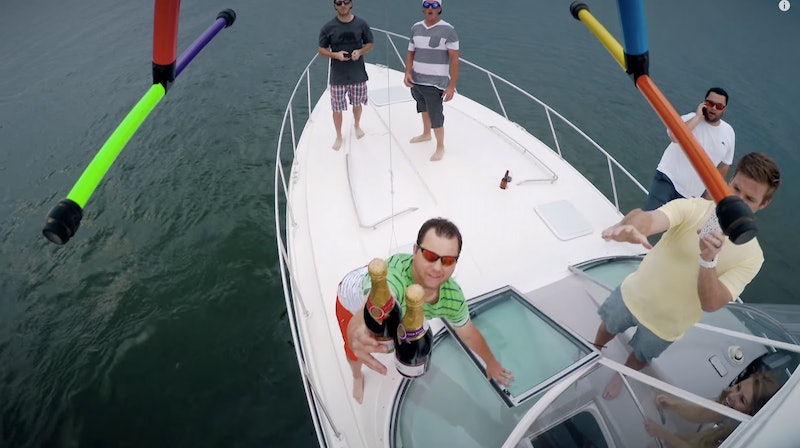 Drones still, to me, sound so much like scary computer wizards from the future zooming around our skies on some mission we'll never understand. Clearly there's a larger value there, what with the Amazon delivery potential as well as drones' apt photography skills. And now this: Drones dropping surprise gifts on people. But actual good gifts. I am officially jealous, to be real.

It's called the I Like Giving Drone, and it makes me feel like I like Mondays slightly more because it exists. I Like Giving Drone started in 2012 and exists kind of like a contest. People can donate funds to the organization and from there, they randomly select two winners per submission cycle to design a drop. FYI, this cycle ends July 30 at 3 p.m. EST.

This has a lot of potential for good, you guys. A lot of potential for sheer terror, too, but that's not a thing we need to worry about so early into the week. (Maybe we could revisit the idea Wednesday.) Personally, I'd like to have mozzarella sticks rain down on me and some pals à la Hilary Duff power anthem. But that's just one option—seriously? I could go on forever.

What if those were mozzarella sticks, though? My dream. So far it looks like the ILGD has spanned quite the variety of gift drops and locations. Some explored so far include:

Beach balls in the pool

This is weak. I am not impressed but it does get better, because there's—

Champagne on a freaking boat

I'm going on a boat this weekend with friends and I'd like to volunteer our squad as happy recipients of bubbly while aboard. Just throwing that out there.

After recovering from a minor heart attack, this could be a fun surprise mid-commute.

Scope out the entire compilation of sweet drops below: