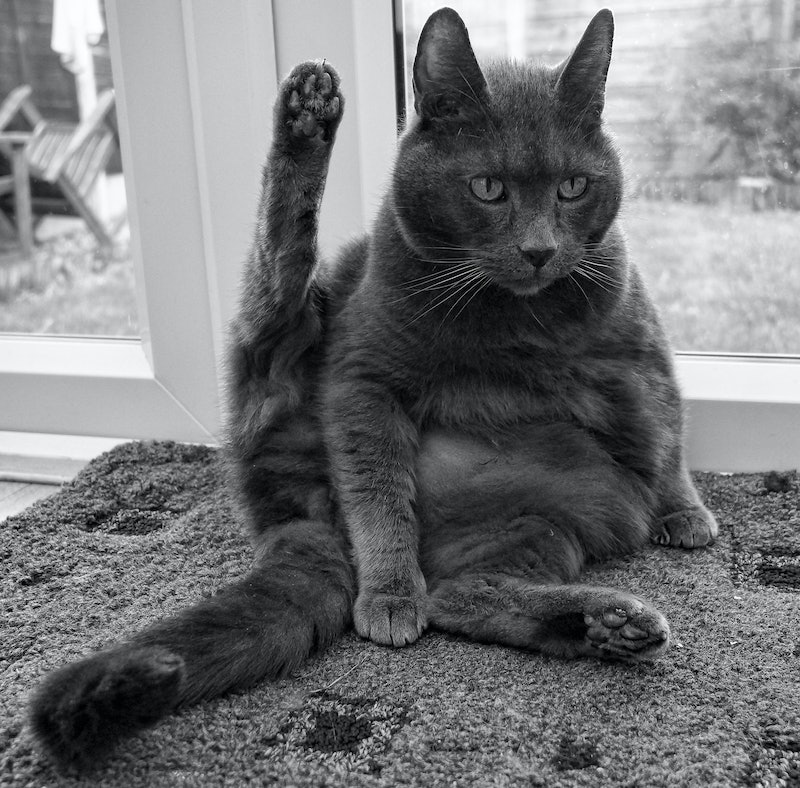 New Yorkers have been coming to the Meow Parlour Cat Cafe, the city's first of its kind, since its opening in December to play with cats and observe them on a cat hamster wheel, cat ice cream truck, and cat everything. And now, to take its offerings even further, Meow Parlour is offering cat yoga classes. Yes, you've heard me right: cat yoga.

Like all the Lower East Side cafe's events, its yoga classes are aimed at finding the featured cats forever homes — because cats and humans who do yoga together stay together (OK, I made that up, but you get what I mean). Meow Parlour has teamed up with the rescue group Kitty Kind, which keeps the supply of adoptable cats coming. The classes are already sold out for July, but you can sign up for August classes or old-fashioned cat visits on Meow Parlour's website.

Wait, didn't this happen before? I first learned about the novel activity of cat yoga about a month ago, and a search through YouTube has revealed that these are not the first animals to do yoga ("do" is defined very loosely here). Apparently, humans aren't the only ones reaping the benefits of yoga. Go figure. Here's who else is drinking the yoga Kool-Aid. Hint: they're not human.

1. The cats at Yoga at Connie's

Cat yoga also popped up earlier this summer in the Illinois studio Yoga at Connie's, which raised $500 for a local shelter through classes with cats roaming around between (and sometimes on) the mats.

So, "Doga" — yoga with a dog — is a thing, and this chihuahua has the moves down pat. I guess the pose is called "downward dog" for a reason.

3. Doga: Yoga For You And Your Dog author Mahny Djahanguiri's demo dog

In this unintentionally hilarious video, a golden retriever practices "ocean breathing," Djahanguiri's relaxation method for both dogs and humans, while an unacknowledged fluffy white dog with no clear purpose wonders in and out of the scene.

Inspired by Doga: Yoga For You And Your Dog, Trombetta decided to hop on the Doga bandwagon and practice with her Chesapeake Bay Retriever. She was nervous that her own pooch was larger than most "dogis" at 65 pounds, but she didn't give up. Haley seemed to struggle with most of the poses but totally nailed "resting dog."