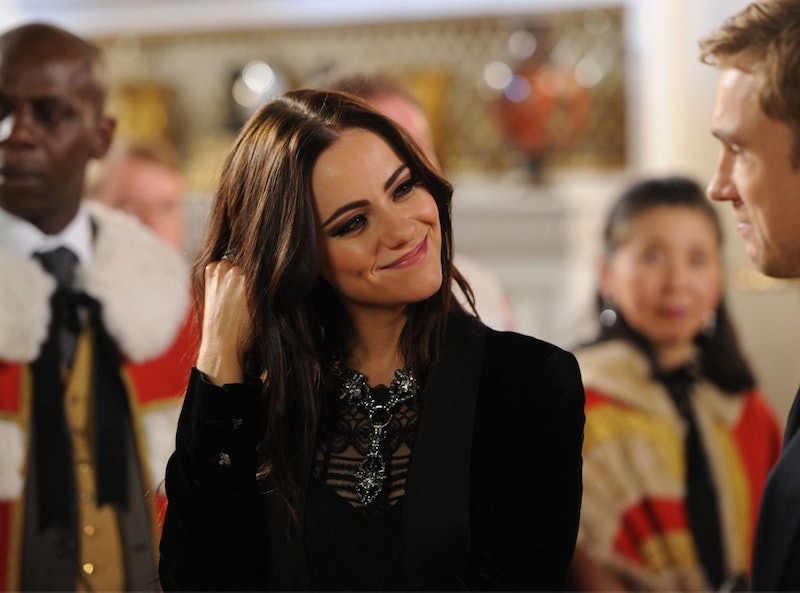 I don't know about everyone else, but I am counting the days until The Royals Season 2 returns. Between its compelling plot twists and intriguing relationships, E! Network's scripted series has exceeded all of our expectations by leaps and bounds. (Though, when you have the likes of Elizabeth Hurley reigning over your screen, can you really expect anything less than perfection?) Either way, it's been captivating enough to make diehard fans (like myself) take this time between seasons to come up with a ton of theories regarding the direction The Royals Season 2 will choose to go in. So what new onslaught of shenanigans could this show possibly introduce next year? One theory that I've come up with centers around the question of Liam and Eleanor's legitimacy issue.

If you recall, these two siblings were both given the royal kick from the throne after it was revealed that they were not, in fact, King Simon's children, but rather the illegitimate product of Queen Helena's secret affair with Alistair. However, as we learned in the Season 1 finale, those paternity test results were flubbed. (The doctor never even tested their blood.) So it's still completely possible that they are the true heirs to the throne. But what if it's not as simple as all that. Knowing The Royals love for drama, I wouldn't be surprised if they threw an extra wrench into the whole ordeal — like by having Eleanor be the real, legitimate offspring and not Liam.

Now I know what you're thinking. Liam and Eleanor are twins, so how can that even be possible? Well, there's always a chance that Helena has been lying about that the whole time (much like she has with just about everything else). What if they aren't really twins at all, but actually half siblings who have two completely different fathers — Eleanor's being King Simon and Liam's being Alistair?

Of course, logistically speaking, I know this storyline would be a bit of a stretch, especially given how quickly the queen would've had to have these two children in succession in order to pull off such a ruse to both the public and the siblings themselves. (If she waited too long one would be able to remember the other one being born.) Not to mention that it would mean the king himself was in on the lie since I'm assuming he was there for the actual births. (Maybe that's why Simon always seemed to prefer Eleanor over Liam?) So yeah, this theory is certainly not without its flaws, but why should we think that would be enough to stop the writers from taking things in this direction nonetheless?

This series has already introduced a bevy of unpredictable twists and turns, including multiple murders, blackmail, whatever Domino is, and the illegitimacy issue at hand. I think the writers would be able to concoct an explanation as to how this twin fake-out could occur. And if they did, just think of all the new and exciting problems that could unfold because of it, especially now that Robert is out of the picture. Not only would it put a massive strain on Liam and Eleanor's usually bulletproof relationship, but it would also make it possible for a badass female to take the crown for her own. We've seen firsthand what Eleanor can do when she puts her mind to it. This could be the perfect chance for her to really stretch her monarchy chops and prove that she has what it takes to rule.

After all, you can't deny that Queen Eleanor has a pretty nice ring to it. Just saying.