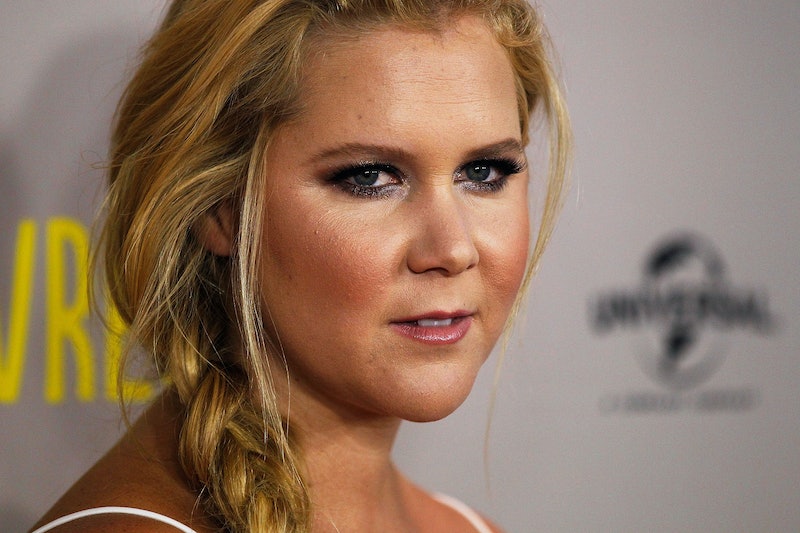 Amy Schumer's brand of humor may or may not be your cup of tea — though I urge you to give her stand-up comedy and show, Inside Amy Schumer, a chance before making up your mind. Either way, a revealing new interview in GQ (yep, the one in which she's dressed like Princess Leia on the cover) drives home the point that the 34-year-old isn't getting up on stage or appearing before a camera and waxing poetic about her vagina and sex life because she doesn't have anything else to talk about. Amy Schumer is taking comedic risks and revealing embarrassing life experiences precisely to help others understand that even things that might be embarrassing or bring shame deserve their place in the sun, because they are what make people human and what make women real women and not an army of banal Barbie clones.

One of Schumer's gifts is that she makes it seem as if her hilarious jokes about Pap smears and allowing a cabdriver to finger her (something that she admits she did when she was younger) just popped into her brain and exited her mouth without a filter. But there's actually a great deal of thought behind what she is doing. The Trainwreck actress explained her goals as a comedian to GQ, saying,

Providing a voice for women that was palatable for men also. An honest, unapologetic human voice. I was [like], "I'm not going to shy away from doing it, I'm going to say the stuff that makes me unappealing." I chose to do that.

The New York native went on to explain that she gets why some people don't appreciate hearing what they consider to be extremely private thoughts and personal stories — because everyone has them and most would rather bury their embarrassing past actions and hope they go away rather than put them out there for the world to analyze and judge. Thank goodness someone like Schumer is here to remind folks (and woman, in particular, who are always discouraged from oversharing) that so-called shameful events and thoughts are, at the end of the day, nothing more than that. And we all have them. She said,

But I'm putting it out there because it makes me feel better, it makes other people feel better. The first time I ever said it [the cab driver story] was on the radio, but the way I talk about it in my [stand-up] special years ago, it's a story I told at a baby shower. Which I did. Well, it was a bachelorette party. I didn't like how fake those women were — I just can't stand that. That pretend existence. It bugs me. The girl whose party it was was mad at me, and the other women were really uncomfortable. Like, no one laughed. It's fun to just keep being yourself when the room's demanding otherwise. I'm putting my dirty laundry out there, and I don't want to be around people who pretend they don't have any.

I don't know about you, but I see more of myself in Schumer than I do in many Hollywood celebrities. She's helping women explore their inner voice, encouraging them to use it, and making sure they never succumb to the idiotic notion that women should be seen and not heard.

More like this
Adele’s All-Female Lineup Includes Kacey Musgraves, Mahalia, & Self Esteem
By Shahed Ezaydi
Howard Stern's Net Worth: Is He The Richest Man In Radio?
By Hugh McIntyre
9 Photos Of Margot Robbie & Ryan Gosling As Rollerblading Barbie & Ken
By Alyssa Lapid
Winona Ryder’s Impact On The Set Of 'Stranger Things' Goes Beyond Just Her Acting
By Radhika Menon
Get Even More From Bustle — Sign Up For The Newsletter