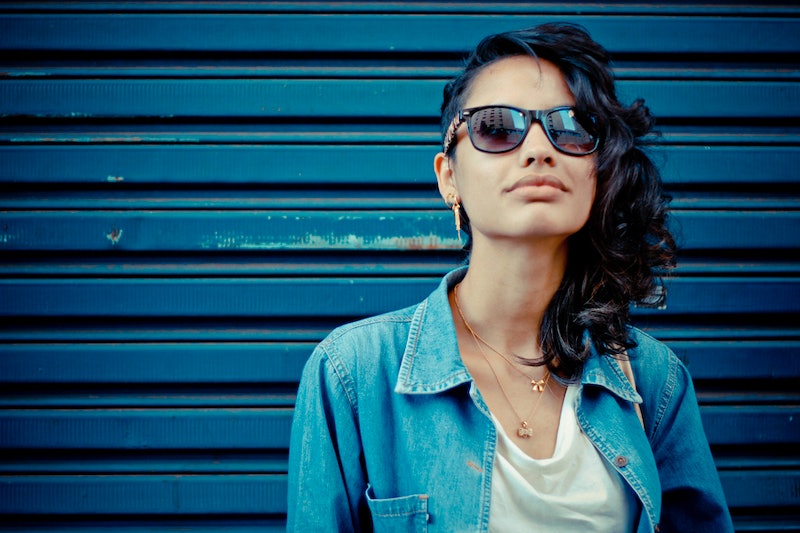 As an AFAB (assigned female at birth), non-binary person, shopping can be quite a stressful activity. With clothing departments that adhere to the gender binary, moving through mainstream retailers like Forever 21 or Zara can weigh heavily on any genderqueer soul. Especially when you're a feminine person in the men's department. Mannequins dressed to the nines in their either super feminine or super masculine clothing, divided by an imaginary line between women's and men's departments, force me to struggle with the same question every time, feet seemingly stuck to the floor of the store's entrance: To what department do I belong?

Shopping causes a ton of gender anxiety — an anxiety that I've previously dispelled by coming to terms with and embracing my fluid identity. I'm thankful to be surrounded by friends and a partner who do not observe or enforce any semblance of gender binary stuff. Unfortunately, we live in a world that demands that you choose "male" or "female," in paperwork, public bathrooms, and in the mall. Perhaps most sacred to me is the world of fashion. But because of the highly gendered way in which it operates, I often feel excluded from or anxious about entering spaces where I get to explore and consume clothing.

High fashion brands are beginning to understand and embrace androgyny quite well. But unfortunately, the cheaper stores — i.e. the ones I can afford — are not quite up to speed yet. From the reactions to those around me, combined with my own gender-based fears I've internalized from an inherently cis-normative world, I can never truly relax into the world of fashion consumerism when I don't feel the right to consume it.

For every other AFAB, gender fluid person out there fighting the good fight as well, I feel you. Hopefully one day we won't have to shop with the concerns of adhering to the binary looming over us. Until then, here are some of the concerns many non binary people have when shopping:

1. Everything In The Women's Department Seems Too Feminine

It's getting harder and harder for me to step into mainstream retailers because of how hyper-feminine everything is in the department I most often visit. Buried in a heap of bright colors, skimpy fabrics, and feminine embellishments, I get deterred from browsing pretty quickly. Why aren't there more neutral patternless garments? And most importantly, whose idea of femininity vomited all over everything?

My idea of femininity — and the varying interpretations others have of it — is not necessarily represented in popular retail stores. You've got a choice of sorority girl, stereotypical music festival style, prim and proper, or prom queen. Where are the androgynous alien princesses at?

2. And You Get Dirty Looks From Fellow Shoppers

As soon as I summon up the courage to step foot into the men's department, I'm immediately made to feel out of place. It's as if I violate some sacred space or set off some kind of vagina-owner alarm simply by glancing at the men's side of the store. Heads turn and glares linger from masculine shoppers as I try the best I can to not lose my nerve while looking through their selection of button downs.

The feminist in me wants to yell at them about how I have just enough right to my masculinity as they do and to let me live! But the anxious baby inside of me drops whatever I'm looking at after 60 seconds and sprints back to the women's department. Where I belong, apparently.

Ah, the men's department sale associate: The keeper of all things manly and the protector against anyone who isn't a cisgender man. The other day I was shopping in a Forever 21, and spotted some men's shorts I liked. No sooner did I cross the invisible gender barrier of the store did a sales associate immediately address me.

He asked me if I needed any help, touching my arm as I tried to step forward. I said no, and continued to the shorts. He watched me as I browsed, and whenever I looked up at him, he gave me a sympathetic and slightly confused look. I did not accidentally wander into the men's department. I want men's shorts, so please leave me alone!

4. And Shopping Isn't As Fun For You As It Is For Your Friends

Based on everything I said above, it's pretty obvious why a non gender conforming person would feel pretty uncomfortable about shopping. I have a right to my masculinity just like anyone else, but I get anxious about even touching the clothes in the men's department sometimes, let alone trying them on, when cis men so closely guard them for the sake of other cis men.

It's frustrating walking out of a store empty handed and not being able to buy the things you want to buy because of all the anxiety created by those who steadfastly believe in gender norms and binaries.

5. It Forces You To Question Friends And Family

Although most of my friends are pretty understanding, there are those who treat my stepping into the men's department the same way the aggressive sales associates do. When I went shopping with one of my less understanding friends, she immediately physically redirected me from the men's department when we were shopping together, laughing as if to say, "Oh Meg, you get lost so quickly!"

Having those you personally know and love pass judgment during the delicate process of shopping makes it way harder. I often avoid the men's department altogether when with certain people, so as to avoid any awkward questions about my gender identity.

6. And It's So Hard To Find Stores Carrying Clothes You Can Feel Good About Yourself In

Is it so hard for clothing companies to make apparel for all bodies and identities?! Many clothing targeted at women is too feminine for my liking. However, it does fit my feminine body quite well. When shopping for men's clothes, finding something that truly fits my body while still looking masculine is super tough. This has resulted in a surplus of oversized sweaters and shirts in my closet.

Don't get me wrong, I love the oversized sweater look. But I also want places like Forever 21 to have masculine options that don't completely swallow up my petite figure. Sizing down in men's clothing isn't the answer either. Size small and below in men's shirts hug my body's feminine aspects even more, since these garments are not designed to accommodate curves. Ugh.

7. Leaves You Wondering Why Clothing Stores Need To Be Separated By Male And Female At All

This is the 21st century, guys. We know that people are not defined by their genitalia, that sex and gender are different things, and that the world is not simply composed of "male" and "female" humans. I look forward to living in a world where I don't have to choose between two gendered departments, and all clothing is equally fashionable and accessible to all kinds of identities and bodies. Shopping shouldn't be stressful.

Fashion is a way many of us choose to create ourselves and express that creativity. Retail stores and other facilitators of fashion shouldn't limit our possibilities based on archaic ideas of gender and beauty expectations. Fashion is exciting to learn about, read about, and write about! Let's make it safe for all kinds of people to be able to actively participate as well.