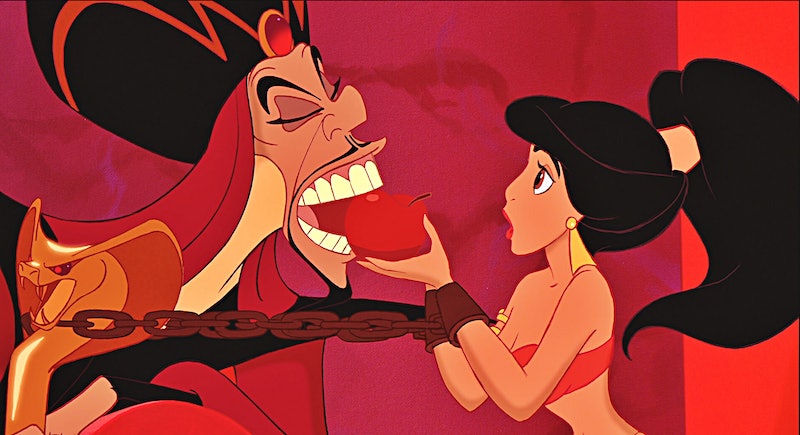 It's well-known that under all the lighthearted family fun and songs about wanting adventure in the great wide somewhere, there's a dark side to Disney. And of course, as a youngin’ you tend to not worry about the sexist overtures that come with Disney Princesses, or the fact that Lion King is basically Hamlet. You miss out on all the adult moments that make these movies great. That’s why you gotta love the Internet, because with minimal digging and a few quick rewatches, you really start notice there are some seriously dirty jokes hidden in Disney movies.

Now, that said, I'm not talking about Disney's penchant for sexual subliminal messages. We've all seen how the word "sex" gets woven into everything, from some dust Simba kicks up in Lion King to Rapunzel's hair in Tangled. While those sneaky bits are intriguing in their own right, they do not compose the creature we're tackling today.

I'm referring to the blink-and-you'll-miss-them jokes that you don't often get as a child, or even the visual gags that may not have registered when you saw them as an adult. Now you’ll truly know why the parents were laughing at certain parts of Toy Story while you were left scratching your head.

Kiss your childhood goodbye and check out these nine suggestive jokes hidden in Disney films.

1. When Sid's Toy "Legs" Turns Out To Be A Street Walker

The child sadist next door has a melange of Frankenstein creations, but one of the most intriguing monsters is a pair of Barbie legs attached to a fishing rod ... a hooker, if you will.

2. When Buzz Can't Contain His "Excitement" Upon Seeing Jessie's Heroism In Toy Story 2

I've seen this referred to as "wing boner."

3. And When Flower Has His Own Bout Of "Excitement" After Getting A Kiss In Bambi

This feels every different kind of wrong, considering that Bambi is roughly a thousand years old, but that imagery sure is ... vivid.

4. When Genie Slips In A Quick Sex Joke Mid-Earthquake In Aladdin and the King of Thieves

You may only vaguely remembered the third Aladdin movie, but Genie makes a raunchy reference to post-marital boning once the palace starts to shake.

Hey! We taste tested 6 flavored lubes so you never, ever have to. Watch here (and subscribe to Bustle's YouTube for more hilarious videos!):

5. When Lightning McQueen Gets "Flashed" By Fans In Cars

The short version? Two groupie cars approach Lightning McQueen saying they're his biggest fans, and then they flash their headlights at him. Do you get it? Do you get it, guys?

6. When There Was An Oedipus Reference In Hercules

This is something that would make zero sense as a child, and only works as an allusion if you studied classic Greek dramas in school. Just so we're all up to speed, Oedipus is a play about a man destined to boink his mother ... which he eventually does. He then proceeds to have a slew of incest babies with her. And that's a thing used for comedic effect in a Disney movie.

7. When The Bus Driver In Hocus Pocus Was ... A Little Too Eager To Help Out

You'll know this joke; it's a classic. Three witches step onto a bus, up to Halloween mischief. The eldest one tells the bus driver, "We desire children." The bus driver replies, without missing a beat, "Hey, it may take me a couple of tries, but I don't think that'd be a problem." Um ... gross?

8. When Size Didn't Matter In Frozen

I was deep into adulthood when I saw Frozen, obviously, but this one slipped right by me. Kristoff is quizzing Anna about what she knows about Hans (i.e. nothing), and at the bottom of his long list is "Foot size?" Anna replies, "Foot size doesn't matter." Piece it together, folks; they're not talking about feet.

9. When Kronk Pitches A Tent ... Literally

Ever believe any crazy sex myths as a kid? Check out our favorite right here (and subscribe to Bustle's YouTube for more hilarious videos!):