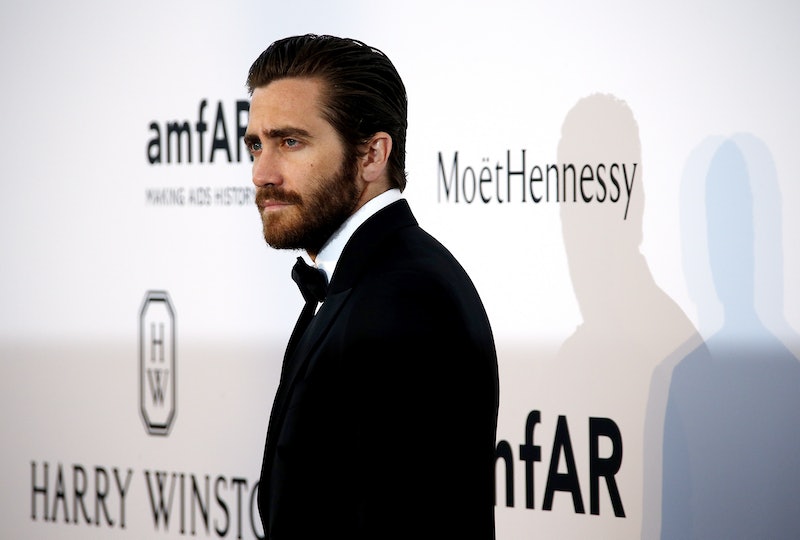 I know we've all been wondering who was next in line for a McConaissance, and I've been thinking for a while now that it might be Jake Gyllenhaal. You know, that thing where you refurbish your career so hard that everyone forgets about the dumb movies you did in your foolish past, a lá Matthew McConaughey? And after hearing Gyllenhaal's costar Rachel McAdams describing his work out transformation for Southpaw , I'm pretty sure I'm correct. After all, everything's lining up here: Like McConaughey, Gyllenhaal has done some semi-embarrassing dabbling over the years in films that aren't necessarily designed to stretch him as an actor (cough, Prince of Persia, cough), and like McConaughey did with Dallas Buyers Club, True Detective, and Mud, Gyllenhaal seems to be trying to make us forget his missteps with more dramatic forays of late in well-received films like Prisoners, Nightcrawler, and now Southpaw.

In Southpaw, Gyllenhaal plays boxer Billy Hope who quits at the peak of his success to spend time with his family, only to spiral into drug abuse when his wife (played by McAdams) is murdered, and his daughter is taken away. Whereas Gyllenhaal lost a huge amount of weight to play Nightcrawler 's Lou Bloom (yet another corollary to McConaughey, who dropped serious poundage to play Dallas Buyers Club 's Ron Woodroof), for Southpaw he packs it back on.

And if McAdams' reaction to his transformation is to be believed, Gyllenhaal's physical range is just as wide as his emotional one. Here's how she described the "awe-inspiring" moment when it all came together in an interview with Yahoo Style:

I really wasn’t surprised just based on what kind of an actor he is and the work we’ve seen from him before. But when Jake was first starting to box, and I went and met him at the gym, he had a big bushy beard and a ponytail. Then, when I first showed up on set [weeks later] on day one, he was in the middle of shooting that first fight in the stadium. I was so unprepared and it was just amazing to get closer and closer to that ring and see him emerge and what he had done – not just the physical transformation but even his emotional shift was so palpable. He had become this person on a cellular level. So really extraordinary. Very awe-inspiring.

Yup, yup, yup! Sounds pretty familiar, because it's exactly how I felt when I saw McConaughey in a serious role for the first time. Just like... "who is this guy and where has he been?" Hopefully we get the same sensation out of Gyllenhaal when Southpaw is released on Jul. 24, and that his own little McConaissance gets recognized at the Oscars the same way McConaughey's was.

And in the meantime, check out the trailer:

More like this
Another Side Of Rupert Grint
By Maria Sherman
Pamela Anderson’s Dating & Marriage History Could Be Its Own TV Series
By Jake Viswanath
Jennifer Coolidge Hunted For Jewels & Lashes In J.Lo’s Hotel Room
By Jake Viswanath
Keke Palmer Shares The Sex Of Her & Darius Jackson's Baby
By Jake Viswanath
Get Even More From Bustle — Sign Up For The Newsletter
From hair trends to relationship advice, our daily newsletter has everything you need to sound like a person who’s on TikTok, even if you aren’t.