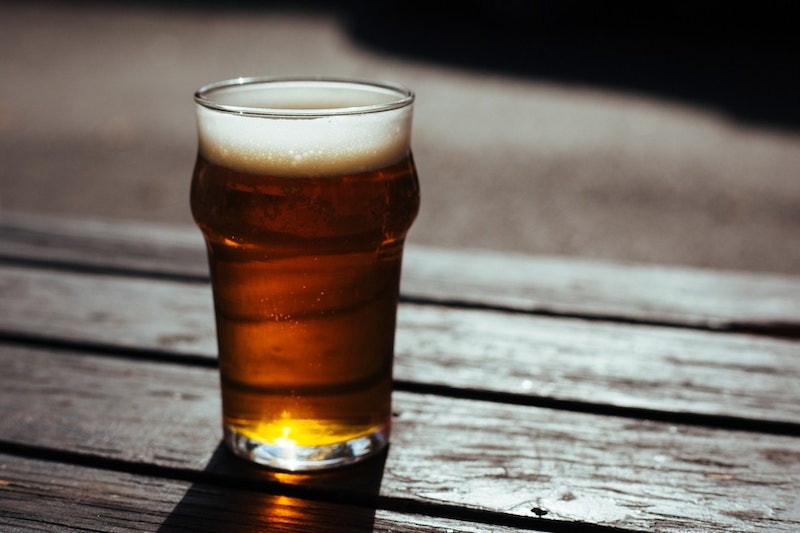 I'm in my mid-twenties now, and according to the sitcoms I marathon on Netflix and the ~journey~ I've seen my other millennial friends on, this is about the time where I start the unconscious shift from Girl Who Drinks Beer And Posts It On Facebook to Girl Who Has Learned That Blunt Bangs Are A Bad Idea For Lazy People, Drinks Wine, And Posts It On Instagram. Of course, that's all a load of media perpetuated nonsense, but I notice that we celebrate the health benefits of wine and ignore the health benefits of beer—which are VERY REAL, thank you very much, even if beer looks less shiny on social media.

I'm not going to pretend to be a beer snob, because I love me some Blue Moon and Corona Light and I'm not here for your judgment, craft beers. And I know I'm not alone in this beer love. The problem is that wine is just so damn needy for our attention on the internet and in all these scientific studies that it seems to have cast beer as the "bad guy" in the alcohol narrative. Well, beer, fret not. I am here to come to your aid, partially because science is awesome, and also because I would like to justify the reckless happy hour spending I have done this summer by saying it was all for my health.

So for all you beer drinkers out there, next time somebody tries to give you flack, go ahead and hit them with this STONE COLD SCIENCE:

1. Beer shuts up that part of you that causes inflammation

The female flowers of the "hop" plant that give beer its distinctive "why yes I am an adult drinking craft beer" taste is also full of bitter acid chemicals that fight inflammation. Take that, human body.

My terrible jokes aside (I am the exception, not the rule), there is a flavonoid in beer called xanthohumol that, when tested on mice, helped with cognitive function. Which explains why I get so boss at Jeopardy after I toss one back. #bless, science.

OK, I'm exaggerating, but damn that would have been a better ending to The Fault In Our Stars. The reality is that beer might help prevent certain types of cancer. A study demonstrated that the bitter acid in beer called lupulone destroyed tumors in rats who had it in their drinking water. Boo-yah, beer.

Beer contains natural antioxidants that can affect the epithelial function, determining easily blood flows through the arteries to the heart. Researchers in Greece tested 17 real live humans and saw that between the group that had beer, no beer, and a vodka alcoholic equivalent of beer, the group of men who had beer every day had significantly better epithelial function — in fact, the beer took its effect within hours of drinking it. S-s-s-suck it, wine-os.

For women, at least. A study showed that women who enjoyed a beer every day were significantly less likely to get kidney stones than women who didn't. (Incidentally, drinking soda super increases your risk ... which I feel like was the universe's way of saying to just drink more beer? It's an investment in your HEALTH, guys.)

6. Beer may ward off Alzheimer's

It comes back to that same ingredient xanthohumol, which has been shown to protect the brain from damage. There is a lot of it in the "hops" of beer, which means every time you toss one back, you're basically shielding your brain a little bit more. Studies are ongoing to see just how much of an effect it has.

7. It can boost ~creativity~

You're not just imagining that the terrible plot of that YA novel you're secretly writing suddenly got hella better! (Wait, what? Glerp.) A study showed that people who had the equivalent of three drinks tended to finish word problems presented to them more creatively than those who had nothing at all. Party hard, y'all.

Of course, everything in moderation — too much of a good thing can lead to liver damage, unhealthy weight gain, and, of course, college-level hangovers. But as long as you're not overdoing it, raise a glass to SCIENCE, because it is on beer's side.

More like this
An Honest Review Of The TikTok-Famous WalkingPad
By Kaitlyn Wylde
Are We Drinking Rosé All Wrong?
By Sheila Yasmin Marikar
Heinz Is Selling A Sprayable Mayo Mousse
By Maxine Harrison
Meet The Spice Company Founder Who Sees Chai As A Metaphor
By Madhuri Sathish-Van Atta
Get Even More From Bustle — Sign Up For The Newsletter