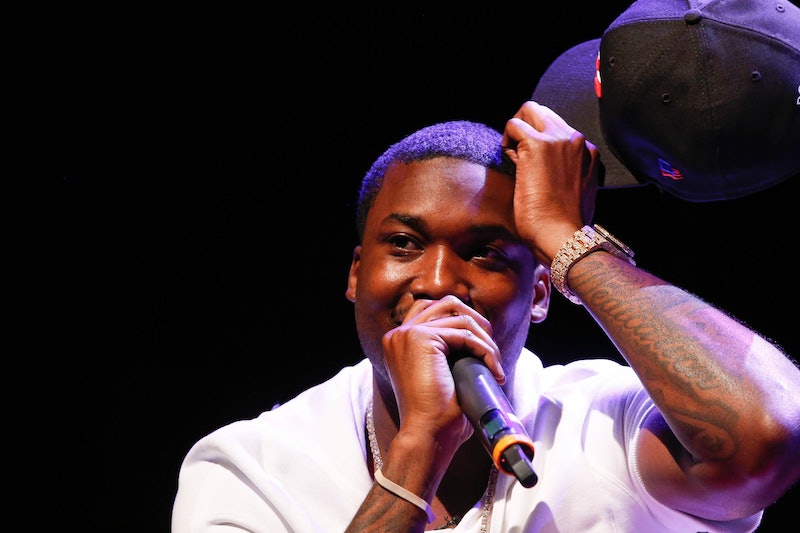 If you're anything like me, you've been very closely following Meek Mill and Nicki Minaj's adorable relationship filled with concert PDA, excessive presents, and giant engagement rings — but other than his undying devotion for his soon-to-be wife, Meek Mill is also gaining attention for his new song "R.I.C.O." featuring Drake. So what does R.I.C.O mean? It's tempting to think that Meek Mill is just saying the Spanish word for "rich" or "wealthy," especially because one of the prominent lines in the song is, "We might just get hit with the R.I.C.O." Are Drake and Meek Mill talking about getting hit by a lot of wealth and fans? It's very possible.

But upon some further research and closer inspection of the lyrics, the rappers aren't actually talking about wealth at all. R.I.C.O actually stands for the Racketeer Influenced and Corrupt Organizations Act, a federal law enacted in the early 1970s that "provides for extended criminal penalties and a civil cause of action for acts performed as part of an ongoing criminal organization," according to an online resource from Cornell University. The law is interesting in that it focuses on prosecuting leaders of organizations where other members carry out the dirty work. For example, if a gang member commits a murder ordered by a higher-up, the R.I.C.O will focus on making sure both people go to trial, even if the higher-up didn't personally commit the murder.

"Racketeering" activity includes things like murder, extortion, robbery, drug dealing or trafficking, money laundering, embezzlement, and bribery, among more. So, as you can imagine, if a person is actually guilty of harmful crimes being addressed and prosecuted under R.I.C.O, it's a pretty serious thing.

But Meek Mill's song "R.I.C.O." doesn't actually say that he, Drake, or any of their friends or family members should get "hit with the R.I.C.O." The song is about love and friendship, saying that their squads roll so deep they're comparable, perhaps size-wise and brotherhood-wise, to a gang or mafia or an organization that might get hit with a R.I.C.O. In fact, they care about each other so much, that if one person goes down for any reason, they all go down, just as organizations might be forced to when hit with a R.I.C.O.

Here are some examples of lyrics to show how this is exhibited in the song:

In this line, Drake is giving a huge shout-out to all the communities of which he's been a part: OVO, his record label; the East end of Toronto, AKA the 6, AKA where he's from; and Reps Up, another record label run by a close friend. He's saying that there's so much of a sense of community, love, and family among these people that they might get hit with the R.I.C.O. He then adds, perhaps jokingly, "Everyone's home for the summer, so let's not do nothing illegal" so they don't get hit with an actual R.I.C.O.

"I go make 50 millions, and then I give some millions to my people."

Another example of how much he loves his people. And I thought my crew ran deep.

"I was like more Rich Porter, no double crossing on my peoples."

Rich Porter was a famous drug dealer in Harlem in the '80s who lived a wildly opulent lifestyle. This line is preceded by a bit about how Meek Mill is dissimilar to Rico, who was also a Harlem based drug dealer, and ended up being a police informant, thereby giving up the identities of his dear friends — something which is clearly frowned upon in Meek Mill's circles. By saying he's more a Rich Porter than a Rico, he's not only establishing his wealth, but also his dedication to his crew. He follows this by talking about how he splits an "M" equally with his friends, further demonstrating his love for the crew. Though the identity of this "M" is unknown, is is undoubtedly a gracious gesture to include the people he cares about.

After listening to this song a few times, I've realized that I will be truly lucky have ride or die crew love even half as strong as these two men. It is what I now officially aspire to.