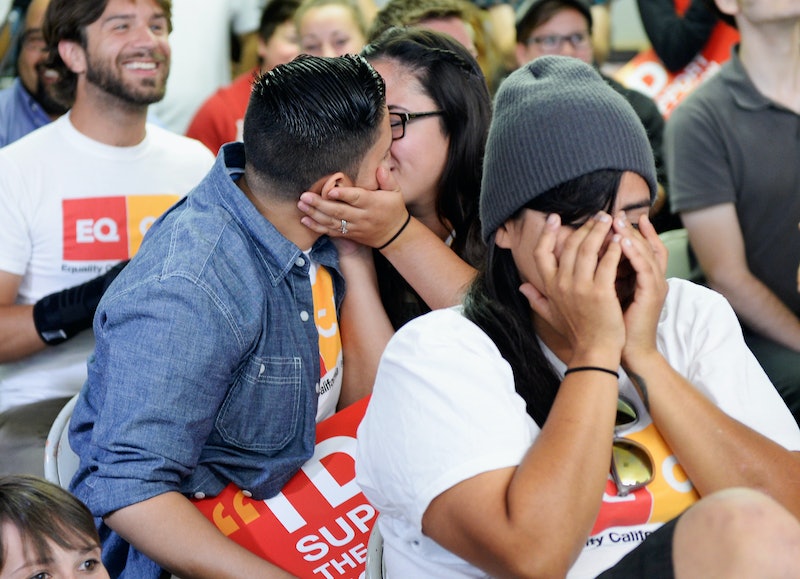 I feel like I've been holding my breath with all that's been going on in politics this week. After today's Supreme Court update on #DOMA and #Prop8 and the successful filibuster in TX I can finally exhale in relief. There is hope.

9 years ago I went to my first pride with my brother (not yet out, but gay gay gay) and our parents. All I really remember from the parade was several older gays coming up to me and saying "You are so lucky to have your parents here." It wasn't until going to college and meeting people with less fortunate stories that I realized how truly lucky my brother and I are. Wish I could be with them today celebrating this significant progress. I'd also like to thank them for being so supportive of us. They created two special human beings.

I hope that we all realize and know that this is not the end of the fight. I hope we all realize and know that although the striking down of DOMA constitutes the end of the last vestige of Federal de jure discrimination against a particular group of people, it does not cure discrimination against LGBTI people and it does not ensure equality to all.

Our individual rights to love and engage in consensual, intimate relationships with others, is one step further to full realization. But we are not there yet. However, today, Edie Windsor, just like the Lovings in 1967, is vindicated in her marriage. A contract she entered into legally in the exercise of the most beautiful human act there is: Love. And that is absolutely something to celebrate in the meantime. #insolidarity#instruggle#fistup

DOMA was ruled unconstitutional (+) and the VRA was gutted (-). You win some, you lose some.

People, let's not do that thing where we pit today's victories against yesterday's failures. we are smart and we know many many things are still shitty in the U.S and federal rulings won't end racism, homophobia, sexism etc etc. Let's treat these rulings differently and not use one to water down the other. I might be influenced by the fact that I am in a country where people celebrate victories but let's use today to celebrate the good that happened in D.C and Texas and how that will positively affect million and millions of people from all walks of life. Then go back to fighting the good fight tomorrow. Life is depressing enough. Let's take the victories when we can.

I am excited about how the overturn of DOMA affects queer immigrants, because its overturn means that married queer women and men can now sponsor their spouses for immigration benefits just like married heterosexual couples. [ But] I don't think immigrant rights should hinge upon whether or not you're in a committed monogamous two-person relationship, because not everyone is made that way, not everyone's family is made that way, and someone who's undocumented and queer shouldn't have their right to stay in this country depend on anyone else.

I too aspire to have voting rights—and the safety to openly strut my queer ass everywhere, and to freely express MY interpreted gender as I see fit over getting hitched any and every day. But I am only one queer individual, POC, and Latin@ in our community. We, QLGBTIGNCPOC, will be affected and exist and may exist in many forms, e.g. in a bi-national same-sex couple, with kids, or eventually tying the knot for financial reasons. We also exist as folks being left out, left behind, and discriminated against. However, it’s still undeniable that this issue intersects with immigration, class, race, and, unfortunately, conforming to practicality. As we continue the struggle, this is one interconnected barrier that will positively bring others down with it.

Gratitude. I know that the culture of increasing openness and acceptance of homosexuals I am inheriting was not earned overnight, but required the sacrifice and dedication of so many brave men and women before me. So I'm thrilled with news that the future for LGBT Americans is getting brighter, but now I find myself thinking more and more about how I can give back, and honor the decades of struggle that has led to this moment with my own actions.

We're here. We're queer. And now the federal government says I can get married, move next door to you and raise a family. Sucks to be a hater today. #highfivescotus

More like this
Here's How To Support Jewish People Amid Rising Antisemitism
By Hannah Orenstein
Prince William Condemns “Unacceptable” Comments Made To A Black Guest At Buckingham Palace
By Shahed Ezaydi
Ayurvedic Principles & Family Are At The Root Of Fable & Mane
By Justine Knight
Bustle Daily Newsletter: December 1, 2022
By Hayley Schueneman
Get Even More From Bustle — Sign Up For The Newsletter