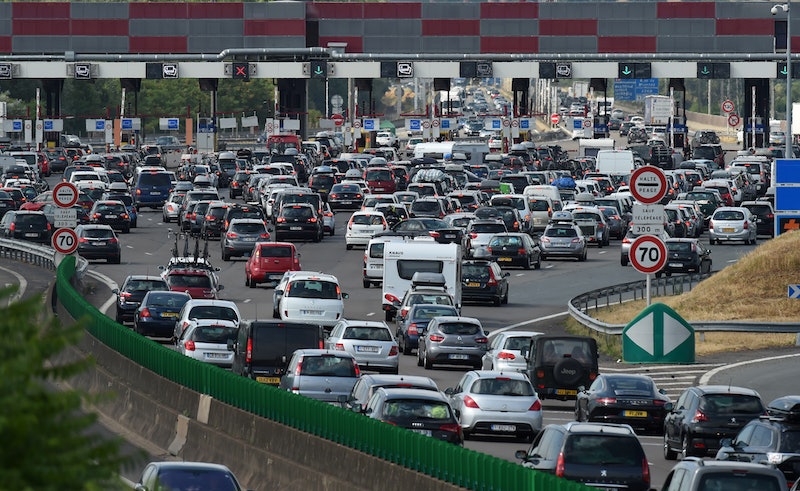 A pickup truck was headed East on the Tex Wash bridge in southern California when the bridge suddenly collapsed on Sunday from flooding. As the Tex Wash crumpled, it hit an adjacent bridge on its westbound side. Now, Interstate 10, the main connector between southern California and Phoenix, Arizona, is closed indefinitely. One person was injured, hundreds were stranded, and motorists traveling from California to Arizona will have to go hundreds of miles out of their way, according to USA Today. And if there's one huge takeaway we need to be paying attention to, it's that accidents such as this point to widespread infrastructure issues in America.

The nation's infrastructure is literally crumbling, as bridges collapse, dams fail, and highways remain congested. The American Society of Civil Engineers (ASCE) released its most recent Report Card for America's Infrastructure in 2013, and the results aren't good. The best grade the United States received was a B- for solid waste (solid trash removal), and the ratings just keep going down.

Roads are the most obvious example of how infrastructure can fail, and the ASCE gave them a D, because 42 percent of major urban highways are congested. Although funding has increased, the ASCE still projects that roads will decline in condition and performance — and the United States Department of Transportation reports that the country had 4,092,730 miles of highway in 2012, which isn't easy to care for.

Flash floods that tear away bridges, like in the accident on Sunday, remind drivers of what can happen under poor weather conditions. The ASCE gave American bridges a C+. One in nine of all U.S. bridges are rated as structurally deficient, and Americans take more than 200 million trips across these structures every day. The average age of the 607,380 bridges in the country is 42 years, and as bridges get older, they don't receive the updates they need, which might mean that a pothole doesn't get filled, or that the steel is corroding, or that the concrete is crumbling.

The list of bad grades goes on, and with them comes memories of past infrastructure disasters, like the derailment of an Amtrak train this summer. Railways, ports, and public parks and recreation got Cs on the ASCE report card, while dams, drinking water, hazardous waste, levees, wastewater, aviation, inland waterways, and transit all got Ds. It's completely terrifying to think about all the disasters that could result in any one of those categories.

There are other concerns besides the loss of lives and damages incurred. Congested roads alone cost U.S. drivers $101 billion in wasted time and fuel annually, according to the ASCE. So the infrastructure issues are hurting both the economy and the environment, two fronts that are usually at war.

A few presidential candidates have expressed their support of infrastructure reform. Hillary Clinton has put infrastructure into her talking points, and a couple of Republicans have spoken out about the issue. According to The Washington Post, GOP candidate Lindsey Graham said that, "if you’re a Republican and you want to create jobs, then you need to invest in infrastructure that will allow us to create jobs.” Unfortunately, Donald Trump seems to be the most passionate, targeting infrastructure failure in the wake of the Amtrak disaster.

The ASCE provides individual state report cards, so you can look up your state's grades and contact your legislators about the worst category ratings. The ASCE Save America's Infrastructure page shows which infrastructure-related issues are being debated in Congress and how to write a letter to your congressperson on the issue.

The problem will get worse unless politicians and citizens start taking a hard look at a system that isn't dramatic enough to receive attention until it breaks down. Ray LaHood, the former Secretary of Transportation said, according to CBS News, "Our infrastructure is on life support right now. That's what we're on."