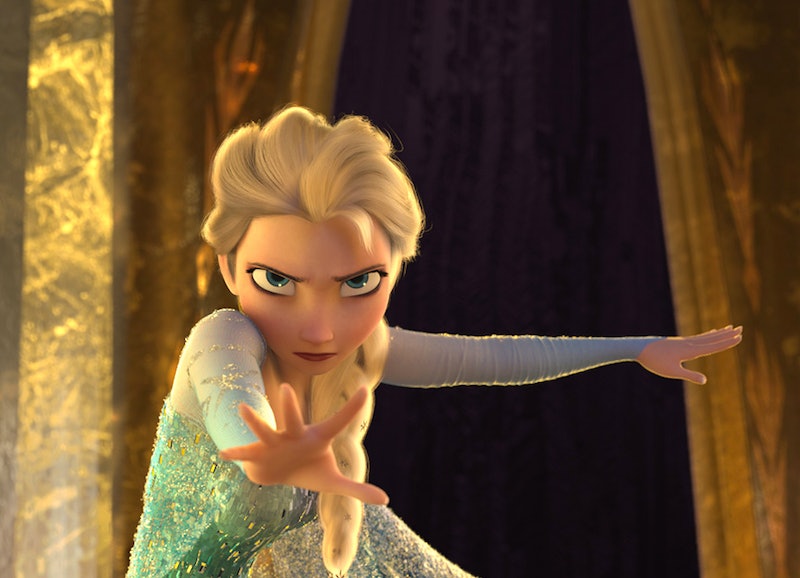 Disney's newest Disney princess movie Frozen premiered this week — and so far it's doing pretty damn well. Frozen's not just noteworthy for raking in the big bucks, but it is a notable boon that the two biggest movies right now both happen to be led by female-centric stories. Could Hollywood be getting the hint?* Frozen 's already generated a lot of discussion, and for good reason: There's a lot to talk about. Frozen, much like Brave before it, feels like a step forward for Disney. In a lot of ways, though, it still feels like they are but itty bitty baby steps.

So let's explore the ways in which Frozen succeeds, and what Disney still needs to work on for the next one:

A Focus On Female Relationships

Frozen is a lot like Pixar's Brave with this one. Where Brave focused on the struggles and triumphs of mother-daughter relationship, Frozen does the same with two sisters. It does this with the Disney brand of unconditional familial love, which in itself has both its pros and its cons. But we've had centuries of popular storytelling surrounding either male-centric stories or female ones in which the girl's main story-line was always about leading her towards her (male) soulmate.

Frozen's got love interests for one of its girls, but notably not for both, and this movie is definitely about these two sisters and their relationship — which is, both literally and figuratively, powerful stuff.

With the incredible popularity of baddies like Tom Hiddleston's Loki in Thor, sometimes it feels like the only people who get the emotionally complex villain-but-not-really treatment are posh British boys. Frozen's Elsa, though, is allowed to royally mess up (a lot) and generally make everyone's lives a whole lot harder, but she's treated with the kind of emotional complexity that actually positions her...well, not very much like a villain at all. She's definitely the biggest catalyst for drama in the movie, but all the "actual bad guys" are much smaller characters who try but fail to manipulate our two female leads out of their power.

And what's really great? We spend more screentime with Elsa's sister, Anna, but when you look at this movie a whole lot of it is really a coming-of-age story for Elsa. Just listen to the film's most notable song, in which Elsa sings "that perfect girl is gone" and takes a step to embracing the powers she was born with.

Someone needs to sit down whoever designed Frozen's official poster and explain to them that when a movie's plot centers mainly around two women, it's really annoying and problematic to put the comic relief snowman front and center — and even worse, to put the two male love interests at the same visible billing as the ladies. Come on, now.

If Disney really wants to make headway in modernizing their female-centric storytelling, one step in doing so would be in actually exhibiting confidence that their female leads can carry the marketing campaign.

This one is big in a lot of ways in the context of aforementioned female-centric storyline in general, but within the context of Frozen is actually one of our smaller complaints. Basically, we groaned when Anna sang in act one about how she hoped to meet the love of her life at the ball.

Frozen side-stepped that groan in a lot of ways — including an act three "twist" we won't spoil here — and in many ways that proclamation on Anna's part is indicative of her own naivate. But haven't we moved past the True Love as Motivator character trait/plot point? Because Tangled had us hooked in part because, yes, it had a good love story, but Rapunzel's motivation was finding herself (and her freedom) and this not-boy-related thing she'd been dreaming of her entire life. Boys don't even occur to her until there's a nice one who just happens to be next to her.

We Could Use Some More Princesses Of Color

If I hear one more people claim that because Frozen is based on a Danish fairytale it wouldn't be "realistic" for them to include non-white people I am going to scream. They are cartoons — they can literally be purple if we decide to paint them purple.Disney has always had a lot of (much-discussed) issues with diversity, and no, Tiana and Mulan and Jasmine do not solve everything (though we do still love them so). Frozen is one in a long line of Disney projects that only serve to further illustrate (literally) that white is seen as the default — both in Hollywood

and in our society. And that's just all kinds of messed up. We need to confront that default if we want to truly move forward.

Why Do They Still Have To Be Princesses?

This is a criticism that popped up a lot surrounding Brave, and regardless of where you fell then it's still a relevant question here. This is especially true after Disney tried to give Merida a pretty pretty princess makeover.

While we have fond nostalgic memories of Disney's '90s/'00s snarky sassy princesses, the continued persistence of the use of royalty as the status-maker for so very many of Disney's female characters does beg the question of how long they can keep this up. Even the ones who weren't technically royalty still become known as princesses within the Disney canon.

*Unlikely, but we shall see.