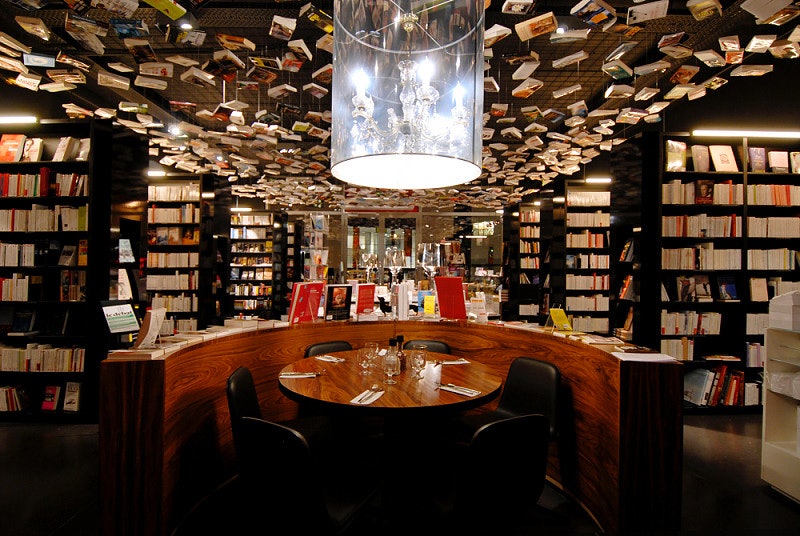 I am not, by habit, a diner who invests a lot in decor. If it doesn't have plastic table tops or pictures of food on the menu, I'll probably be satisfied by its look. But there's an increasing class of restauranteurs around the world who want to add a distinctive edge of surrealism, escapism, or just plain weirdness to the dining experience. These days, setting counts, and the more extraordinary and counter-intuitive the better. These seven restaurants have sprung right out of your dreams — or Lewis Carroll's — and whether they're your fantasy or your nightmare is up to you.

The idea of the surreal dining "experience" has been around for a very long time. Sherry's, a legendary New York restaurant, once hosted a banquet entirely on horseback in 1903, where guests didn't dismount for the entire meal. In 1972, the Rothschilds held a surrealist dinner party, dominated by Salvador Dali's designs, that would have given Freud a conniption. Considering modern restaurants themselves have only been around since Paris in the 18th century, this is a pretty distinguished amount of crazy.

Maybe we're all becoming so jaded that we need something new, something extraordinary and boundary-pushing, to get us interested in the boring but necessary matter of nourishment. Pop-ups, street food, "cinematic dining experiences," being suspended hundreds of feet in the sky by a crane: we need distraction, and we're absolutely getting it. Here are the most dreamlike restaurants in the world — though they may not let you sleep soundly afterwards...

This is the classic dream restaurant, straight out of the fantasies of one of the weirdest gentlemen who ever penned a book, Lewis Carroll — author, of course, of Alice In Wonderland. Japan is home to many themed restaurants, and this series of Alice-themed places sticks close to the decidedly out-there spirit of the books, with playing cards, red hearts, grinning cats and mushrooms everywhere you look. You can even dine inside a discombobulating maze.

You've probably seen this one on Pinterest, but have you stopped to think about how profoundly, dreamily strange it is to eat your dinner underwater while sharks and fish swim calmly past your face? Sea, as part of the Anantara Kihavah resort, is one of the most famous restaurants in the Maldives for its "submerged" experience, but it's also frankly bonkers. Do you lift your sea bass off the plate to say hello to its family while they cruise by? Is nobody finding this peculiar?

This is dreamlike in the sense of childhood fantasy — or nightmare, depending on how you feel about crooked, asymmetrical houses in the treetops that look likely to house decidedly unfriendly witches. Alnwick Garden Treehouse is, of course, for benign dining rather than sorcery, and is a popular place for "magical" weddings, but it all has a distinct air of the Baba Yaga.

Ever had that dream where everybody around you is doing something completely crazy and you're the only one who seems to think it's strange? Welcome to the experience of the Labassin Waterfall Restaurant, where everybody is calmly eating their meals while calf-deep in water from an enormous indoor waterfall. It's intensely cooling, but must feel utterly weird, particularly if fish start having lunch on your feet.

The clue isn't actually in the name: this famous Indian restaurant actually refers to a kind of bazaar where thieves sold their wares. The resulting pell-mell antique-market vibe, where you're surrounded by all manner of expensive and useless junk, is a pretty dreamlike dining experience. Where else could you regard spooning food out of an impeccably restored 1930s roadster with complete equanimity?

This is the very nicest of dreams, and requires a truly dreamlike amount of money to make it happen: a lantern-filled grotto on the edge of a cliff, directly over a churning ocean. The Grotta Palazzese are famous worldwide for their ridiculous view, but the entire setting feels eerily like a film set. Think of it as the kind of dinner in those dreams where somebody suddenly appears in a sleek suit with a James Bond weapon.

Cook & Book is technically cheating, because it's not one restaurant — or just a restaurant at all. It's seven conjoined bookstore-eateries, each with a different literary theme and extravagant type of weirdness. For instance, you can chow down inside an old Airstream caravan, under a graffiti roof, in a mock shed with walls of grass, or in a surreal anti-gravity space where books float freely from the ceiling. Nobody's holding back here: it's book-mad with the emphasis on the "mad".