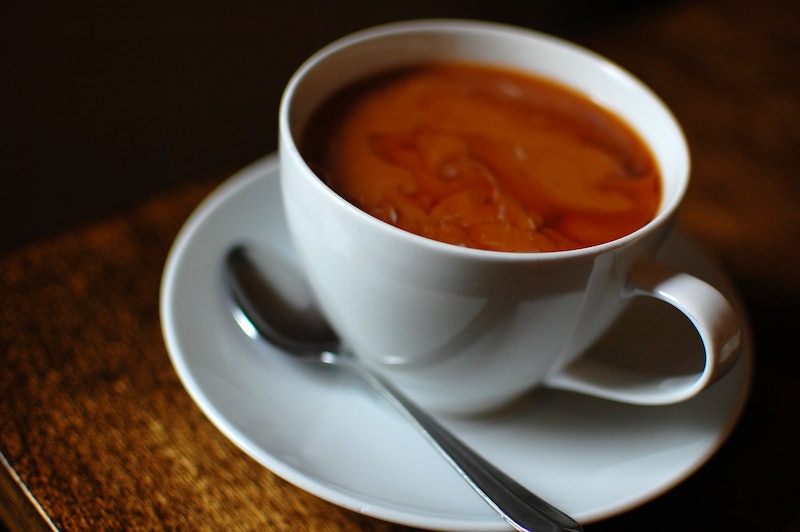 Instant coffee has long had a bad reputation for tasting, well, terrible. Even the best brands don't seem to stand up next to a cup of traditionally brewed coffee, and let's be real, the instant stuff doesn't hold a candle to cold brew. What makes this quick fix so bad, and are there any ways to make instant coffee taste better? I did some digging to find out.

The most common complaint about instant coffee is that it has a chalky consistency and a bitter, almost sour taste. With a description like that, why even bother with the stuff? Despite its common criticisms, instant coffee is the easiest and most convenient way to get your much-needed morning cup of caffeine. It's great when traveling, especially if you are camping or hiking, because it doesn't require any equipment. It's also cheaper than regular coffee, so it can be helpful for those on a budget. If you find yourself constantly rushing in the morning, then the "instant" part of instant coffee could be the difference between catching your train or walking in late again. Even with all of those benefits, though, the general opinion on instant coffee is that it... kind of leaves plenty of room for improvement.

Chocolate makes everything better, including instant coffee. Before adding water to your instant coffee, add in a scoop or two of sweetened or unsweetened cocoa powder. Voila! You've got yourself a super simple cup of mocha coffee.

OK, I would put butter on just about anything, but coffee? When I first heard about this weird coffee craze, I was skeptical, but take it from someone who has tried it — butter brings out the best in coffee, especially instant coffee. It helps subdue the bitterness while giving the coffee a silky texture. Add a small slice of butter and a splash of cream to your already made coffee, and prepare yourself for a whole new flavor.

Sometimes coffee just needs a little flavor, and cinnamon is a great way of adding just that. Spicy but not overpowering, cinnamon is a healthier alternative to sugar or other sweeteners. Before adding water to your instant coffee, add in a small scoop of powdered cinnamon to the coffee and stir. After adding the water and milk or sweetener, sprinkle a little extra cinnamon on top.

If you're a fan of Frappuccinos, try turning your instant coffee into an imitation of your favorite beverage. In a blender, add ice, milk, sweetener, and instant coffee mix for a smooth, creamy blended coffee drink. You can even add cocoa powder or caramel sauce if you're feeling extra fancy.

Maybe not the best idea if you have to go to work, but a little alcohol can greatly improve your instant coffee. A shot of Kahlua, Baileys, or whiskey adds another level of flavor to your instant coffee while giving you a nice buzz. What a perfect combination.

Instant coffee can be extra bitter, but a little bit of frothed milk can help neutralize that acidity. You don't need a fancy espresso machine to make frothed milk, either — a small, handheld one costs around $20. Froth cold or warm milk in a separate container before scooping it into your mug for a more elegant take on instant coffee.

Of course sugar can greatly improve instant coffee's bitterness, but there's so much more out there than the granulated stuff. Honey, maple syrup, and sweetened condensed milk are great options that add more complex flavors along with the sweetness. It's a two-for-one deal.