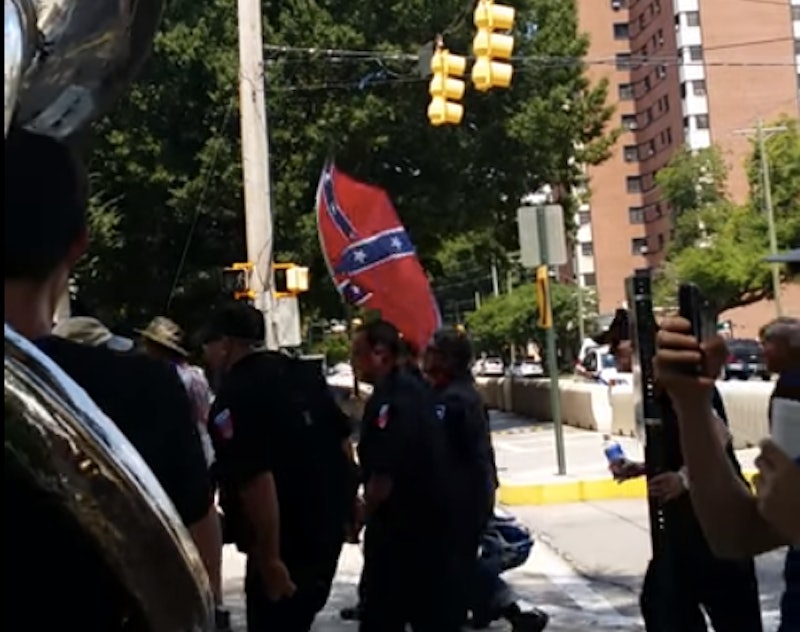 What is to be done about the fact that our communities are still made up of a lot of terribly horrible, racist people? I've always been a big fan of fighting fire with fire. For instance, when I'm humiliated and scared in the street by a cat caller, I would like to be able to equally humiliate and scare them. Likewise, when I hear about a racist asshole being a racist asshole, I feel like the rest of us are well within our rights to be idiot-cist against them too. This sousaphone player mocking the KKK parade has the right idea, walking along side a Confederate flag sporting KKK march playing a loafing, ridiculous song that makes them all look like the dullards they are.

It reminds me of something in a Disney movie when the animals who are stupid come out, padding along in a line (normally elephants, I think). It's really the best theme music for a crowd of people who really don't belong in modern society. The caption of the video simply reads: "Anti-KKK protestor was playing Tuba to make their approach sound lumbering and stupid...stupid is as stupid does". Watch below, feel warmed that there are people willing to take their sousaphone to the street in very profound, but also very non-invasive, protest:

Here are some more wonderful protests against bigotry:

1. This little girl standing up to an anti-gay preacher

2. Tyra Banks because heaven is a place on Tyra

3. This woman standing up against catcalling