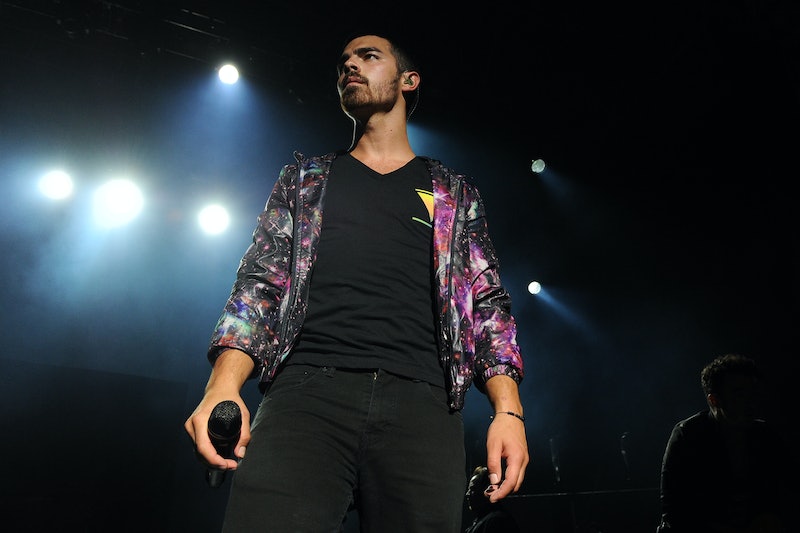 It's hard to remember, kids, but before Justin Bieber, Miley Cyrus 2.0, and something called an Ariana Grande, there were the Jonas Brothers. The pop-rock band, which recently announced their break-up, was formed in 2005 by three brothers: Nick, Joe, and Kevin. The JoBros, as they were soon nicknamed, found quick, worldwide success thanks to TV spots on The Disney Channel and an enormous tween fanbase. For a couple of years, they were huge, selling out arenas, dating pop stars, and winning over most of the country with their good looks, charm, and pledges to stay "pure" until marriage.

And now we find out it was all a lie. In a new interview with Vulture called "My Life as a Jonas Brother," Joe, the middle brother, reveals what worldwide success was truly for the siblings during the mid-late '00s. In the piece, he talks candidly about everything from the dynamic of the band to relationships with fellow superstars; it's a must-read for fans of the band, but really, just quality entertainment for anyone who enjoys celebrity tell-alls.

Still, thanks to the lack of anything really juicy, it's pretty obvious what the interview is — a way for Joe, now 24, to prove to the world that he's an adult without ruining the credibility he established as a former child star. There are some interesting take-aways from the article, including some definitely PG-rated anecdotes, but it's easy to see that every quote is calculated and every admission carefully constructed. Basically, the profile is Joe's way of saying "I've done some grown-up things, but I'm a good kid, I swear!"

Here are Joe's 10 most "revealing" quotes from the article:

1. "I believe in God, and that’s a personal relationship that I have, but I’m not religious in any way."

For most celebrities, this quote wouldn't be that shocking, but for a member of the Jonas Brothers, who, as a band and individually, made devout Christianity part of their image (remember those "lockdown" prayer sessions before concerts?), it's a pretty big deal.

2. "I’ll never forget our first concert: We were named J3—and we hated the name. It felt like something a boy band would be called. I remember turning to my brothers before that show and saying, 'Do you want our name to be J3 for the rest of our lives?' When we got onstage, I was the one to announce to the crowd, 'Hey, we’re the Jonas Brothers.' Nice and simple."

We have to hand it to Joe; J3 just doesn't have the same ring to it as the Jonas Brothers. Plus, what kind of nicknames could we make from that?

3. "For a few years, my two brothers, our father, our backup band, and I drove around in a van from city to city, playing any venue that would have us—schools, churches, bat mitzvahs—while our mother stayed at home to take care of our youngest brother, Frankie."

The Jonas Brothers have a younger brother named Frankie?! Who is this child and why hasn't anyone heard of him? Is he the Aimee Osbourne of their family? So many questions.

4. "The thing about the show (The Disney Channel's Jonas) was that some of the writing on it was terrible. It just ended up being some weird slapstick humor that only a 10-year-old would laugh at. They took out the kissing scene that Nick had. I had to shave every day because they wanted me to pretend like I was 16 when I was 20."

It's not so much the information that Jonas was terrible (anyone who watched half an episode knew that), but that the brothers were aware of just how bad it truly was.

5. "We were working with Disney in 2007 when the Vanessa Hudgens nude-photo scandal happened. We heard that she had to be in the Disney offices for a whole day because they were trying to figure out how to keep her on lockdown."

Poor Vanessa Hudgens. It'd still be six long, Disney-filled years before she shed her "good-girl"image with Spring Breakers. We bet she was counting the days.

6. "They’d teach you how to change the subject, whenever you were asked an uncomfortable question, by saying something like, 'Oh, that reminds me of my dog! I have a great story about my dog!'"

This just makes us think of this great acting lesson from Friends' Joey Tribbiani: "If anyone needs help pretending like they like it, I learned some things in acting class. Try rubbing your stomach, or saying, 'Mmmmm.' Oh, and smiling!"

7. "We decided to take the rings off a few years ago. I lost my virginity when I was 20. I did other stuff before then, but I was sexually active at 20."

Woah. Woah. HOLD UP. The Jonas Brothers aren't virgins?! This is HUGE.

8. "I used to sneak out and hook up with this one girl in her car... The girl was also in the business, and we thought we were screwed because we were both working with Disney. It would have been the worst thing we could think of happening to us. But nothing ever came out!"

Poor teenage Joe Jonas, getting peer-pressured into smoking weed by two 15-year-olds. What a tough life.

10. "The Jonas Brothers’ breakup was going on for a lot longer than a lot of people thought. We hit a place where we just weren’t jelling on the same things, and we didn’t want to become a band that was worried about the fact that people didn’t understand how cool we were. The whole situation was breaking us up as a family, and we ultimately felt like we were holding each other back."

This quote is actually pretty sad, but it makes a lot of sense. Being in a super-famous band with your siblings has to take its toll after awhile, and the Brothers had already lost a lot of their fans to newer, younger acts. It's a shame to see them go (S.O.S. was a damn good song, okay?!), but it's probably for the best, especially if it'll lead to more "tell-all" interviews like these.