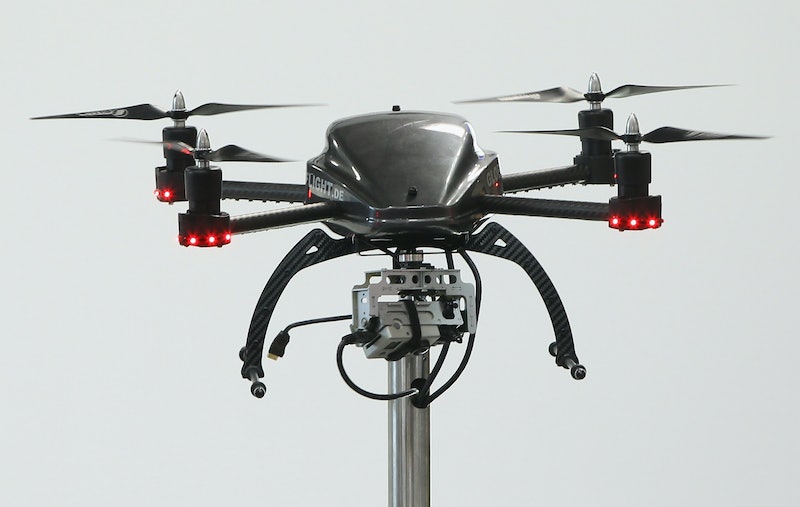 Move over, Google: Amazon's inching closer to world domination, and they've already got drones. On Sunday, Amazon CEO Jeff Bezos took to 60 Minutes to tell Charlie Rose all about Amazon's next-stage delivery scheme, Prime Air. Otherwise known as "drone delivery," Prime Air would apparently deliver packages to Amazon customers via flying robot, in all of 30 minutes. "I know this looks like science fiction. It's not," Bezos told Rose. He estimated that Prime Air could be available in "four, five" years. Welcome to the future; here's your favorite toothpaste.

But we're not entirely convinced. Much like the promised Hyperloop, there are a slew of practical concerns in the way of an honest-to-God "drone delivery service."

First, let's make this much clear: Bezos did not use the term "drone" by accident. The word "drone" always sparks a reaction. Maybe that's because so many Americans feel unsettled about their use in the military: 53 percent of the nation is "concerned," according to a recent Pew Research report, though most remain in support of drone strikes for antiterrorism measures. (For the record, all other countries polled by Pew largely disapprove of American drone strikes.)

The "drone" buzzword isn't the only part of Bezos' announcement that screams PR move: remember, it's Cyber Monday today — otherwise known as Amazon's biggest day of the year. It's no coincidence that on the biggest Internet shopping day of 2013, Bezos has ensured that everybody is talking about the world's biggest online retailer. During the 60 Minutes segment, Bezos and co made some remarkable claims: that their still little-known Amazon web service powers a bunch of high-profile Web clients including the CIA; that Amazon's warehouses have been named "fulfillment centers," and are rapidly popping up around the globe (creepy); and that ultimately, "anything you want on, on Earth you’re gonna get from us." It all sounds a bit good to be true, and maybe it is.

Yes, use of commercial drones is on the rise: the Federal Aviation Administration predicts we'll see 30,000 in the air at any given time in 20 years. At the moment, commercial drones are typically used for filming purposes, and are developed mainly to record and stream video — they were even used for activism during Occupy Wall Street.

But that doesn't mean that we're going to see buzzing robots dropping packages outside our door in five years. For a start, the FAA is yet to lay out terms of use for commercial drones — right now, the agency regulates drones on a case-by-case basis. Though the FAA hopes to do this by 2015, it's been pointed out that this is a hugely optimistic deadline. (Though perhaps the fact that China is well on the road to legalizing drone delivery first will help motivate some sort of Cold War arms race.)

Organizing air traffic is no small feat, particularly when it comes to the list of safety and legal concerns: who's to say that the drones won't crash, or drop your Amazon package on your head when you step out of the door? Who would pay out millions when a drone inevitably does hit someone on the head?

And don't get us started on the ethical concerns: since the drones are capable of "seeing," we would essentially have surveillance cameras (or, shall we say, even more surveillance cameras) trained on us all the time. Cough, 1984, cough. It's not an impossible scenario, but it sure isn't going to be as easy as Bezos makes it sound.

As a side note, listen to how loud these drones are. It'd be like living on an airport runway.

Yeah. We're not so sure.

As much as Amazon would have you believe that they're a next-level company doing its best to make life easier, this probably isn't the case. Bezos is worth $25 billion, and he's a shrewd businessman. And as the Guardian's James Ball pointed out, this most recent "neat trick has knocked several real stories about Amazon out of the way."

Certainly, the drone "announcement" sparked far more coverage today than a pesky tax issue Amazon's trying to wriggle out of. On Monday morning, the Supreme Court quietly rejected Amazon's attempt to avoid Internet sales tax (not the first time Amazon has refused to pay a billion-dollar tax bill.) The 60 Minutes segment also deflected from those ever-present claims that Amazon's working conditions are terrible, and that its employees are at a higher risk of mental illness. Or the fact that Amazon has pushed countless small businesses out of work, and will continue to do so as it grows in size and power.

Amazon sure is good at PR.