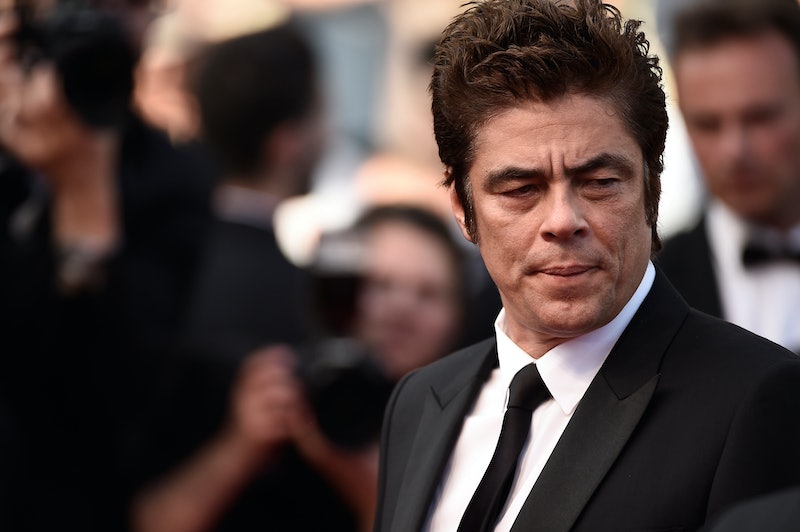 There's might be a new Star Wars villain, y'all, and he's the baddest of the bad: Deadline reports that sources say Benicio Del Toro may join Star Wars: Episode VII in a major role — and, even better, said possible role might be that of a villain. Though this is unconfirmed, I gotta say, how perfect would this be?!

There aren't many other details, as the ins and outs of the Star Wars movies are kept close to the chest (as if anticipation wasn't high enough!), but, as Deadline wondered: "Could this suggest possible spoilers for Star Wars: The Force Awakens? That film has three confirmed villains: Domhnall Gleeson’s General Hux, Gwendolyn Christie’s Captain Phasma, and Adam Driver’s Kylo Ren. That’s a fairly packed slate of heavies. The Del Toro casting news makes one wonder if one of that trio doesn’t make it to the end of the movie."

Del Toro's rumored casting is exciting, because LOOK at him: the guy oozes villain. But what kind of bad dude would he be playing in the galaxy far, far away?

Del Toro is certainly sinister-looking. He has that brooding, evil genius thing going for him, and he's kind of a surreal character —like a mob boss that's also a wizard. LucasFilm would be remiss if they didn't play off of his totally natural darkness. Del Toro, to his credit, has proven that he can easily join the Dark Side — and he knows how to play characters that are out of the world. After all, he was the Collector in Marvel's Guardians Of The Galaxy, a glamorous, billions-of-years old alien that is obsessed by collecting all of the gorgeous oddities of the universe. And Del Toro did the wonderfully weird role justice.

There's no telling what kind of villain Del Toro could play in Star Wars Episode VIII, which won't be released until 2017 (you gotta give it to Disney, they know how to get their fans right where they want them). But if the producers at LucasFilm know what's good for them, they'll make him as kooky and terrifying as possible.