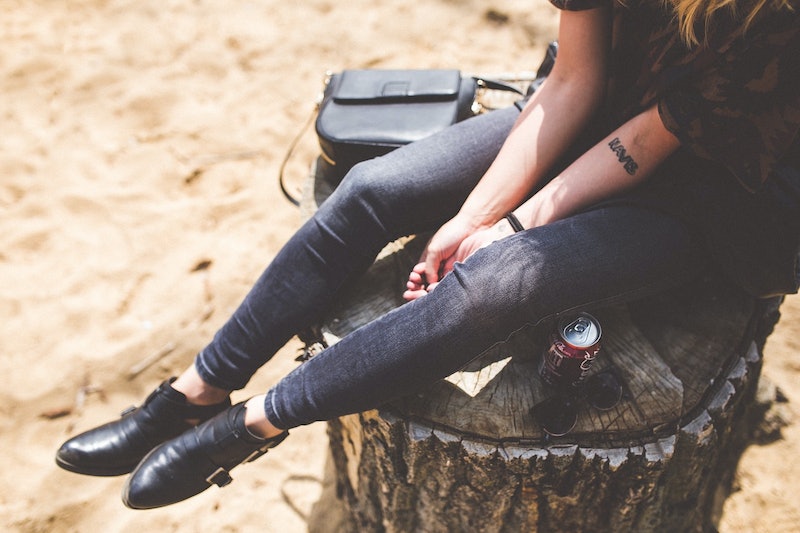 Chub rub, thigh chafing, living hell — there are a bunch of different ways that people refer to what happens to their inner thighs when slight moisture and constant friction are added to the mixture. We write about how to prevent chub rub and heal inner thigh chafing, while using a bunch of different expressions and euphemisms. I don't really care what terms people use to refer to their own bodies, but it seems there has been some mild outrage lately (shared over social media, of course) over the most widely used and my own preferred term for chafing: chub rub.

While some of the people who are upset over the use of the term, deeming it "not body positive," are seemingly well-meaning, I'd argue that both talking about inner thigh chafing and embracing the term chub rub are totally body positive actions. But I understand where the backlash comes from: Most people want to prevent putting a slightly stigmatized term like "chub" in front of a phenomenon that happens to most humans with thighs. Using the phrase might make some feel like they're calling others chubby — which isn't the case — which would in turn feel like an inherently bad, body shaming thing.

I get it! And I applaud people for standing up for their fellow humans and for wanting to make sure everyone feels good about their body. I'm with you.

But here's why I think we should embrace the term "chub rub" for people of all sizes as a body positive move:

1. "Chub" Is Only A Negative Descriptor If You Think Fat Is Inherently Bad

I'd argue that people who get angry or upset about having a part of their body that is inarguably a bit soft and, yep, chubby described as such is the body negative move. Yep: How's that for a plot twist for ya? If being called fat (or any related euphemisms), being described at fat, or having your body part called fat is automatically seen as a horrible thing, then what are we saying about fatness?

There's nothing inherently bad about fat people or their fat body parts or people of any size's body fat. Automatically equating fat with something shaming or negative is the problem here.

Is it so awful to lighten the mood when talking about something that's generally a bit unpleasant? I am completely against trivializing serious issues like sexual assault with terms like "grey rape" or "date rape." But I think when it's something as un-serious as a bit of body chafing then we can surely lighten things up a bit, no? Just how some people call their periods "Shark Week," laughing at things that suck is a good coping strategy.

If as a kid you or someone who was the topic of conversation was ever referred to as "chubby" as a euphemism for fat, then you know the loaded passive aggressiveness in this one simple term. Being able to call yourself or your body parts "chubby" with deep affection and a bit of a laugh is the perfect subversion to this garbage bullying and quiet way of body shaming. Reclaiming harmful words, like the long history of reclaiming the word fat, is a conscious and political move.

Seriously: Unless you are an American Ninja Warrior who is .5 percent body fat, you have body fat. That's not a bad thing, it's just part of being a human bag of skin on this earth. We all carry it in different places and a lot of women carry fat on our thighs and abdomen because of hormones. Getting mad about noticing thigh chub would be like getting mad about talking about the roundness of an eyeball.

5. Policing How Someone Talks About Their Body Is Not OK

In most of the comment threads where people are arguing against the term chub rub or fatkini or whatever, it's often people who are self-identifying as fat or plus size who are speaking up about the importance of these terms. When people get concerned with me calling myself fat instead of opting for "curvy" or "voluptuous" or otherwise, it's beyond frustrating.

It took years to be OK with talking about myself in a way that accurately describes the way I look. People would say, "You're not fat, though! You just have big boobs," or, "Shut up, you look amazing!"

When people have serious disorders that mean seeing themselves in a way that's not rooted in reality, we should be concerned and try to be considerate and helpful. To shut me down and tell me that "chub" or "fat" are not OK for me to use to describe my own body and its parts is totally out of line.

So: Call it what you want, but my thunder thighs and me are going to stick with chub rub.