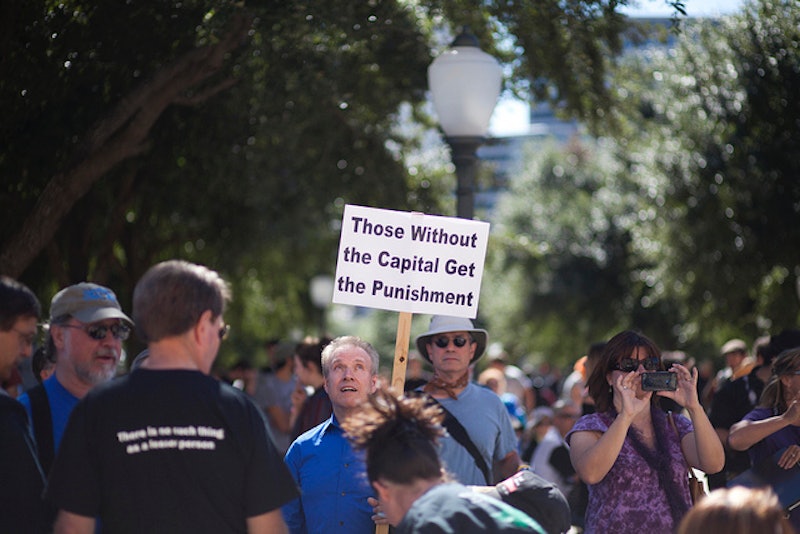 Progressive politicos have a lot of love for Texas right now, but elsewhere in the conservative state, protestors are preparing to make a statement on another other big, divisive social issue of our time: The death penalty.

Death-row inmate Kimberly McCarthy will be put to death by legal injection tonight, for the violent stabbing and robbing of an elderly neighbor in 1997. Her execution will mark the 500th in the state since the Supreme Court sanctioned capital punishment in the late 1970s. Texas leads the country in executions – Virginia trails as a distant second, at 110 executions since 1976. On average, Texas executes one inmate every three weeks.

According to a University of Texas/Texas Tribune poll last year, most Texans approve of capital punishment, with only 21 percent of respondents saying they oppose it. As this grim milestone looms, however, that minority has become more vocal. Unless the courts grant a last-minute reprieve, anti-death penalty protestors plan vigils in Houston, Dallas and Austin.

"There's a big difference between fair and harsh," former Texas Governor Marc White said. "I think you have [Texas] getting a reputation for being bloodthirsty, and that's not good."

Texas's current governor, Republican Rick Perry, has overseen 261 executions during his tenure alone. which the Texas Tribune writes his term "represent[s] the largest number of executions in any state and the largest under any recent governor in the United States. Perry has rarely used his power to grant clemency, granting 31 death row commutations, most of them — 28 — the result of a 2005 U.S. Supreme Court decision banning capital punishment for minors."

"I think our process works just fine," Perry said. "You may not agree with them, but we believe in our form of justice."