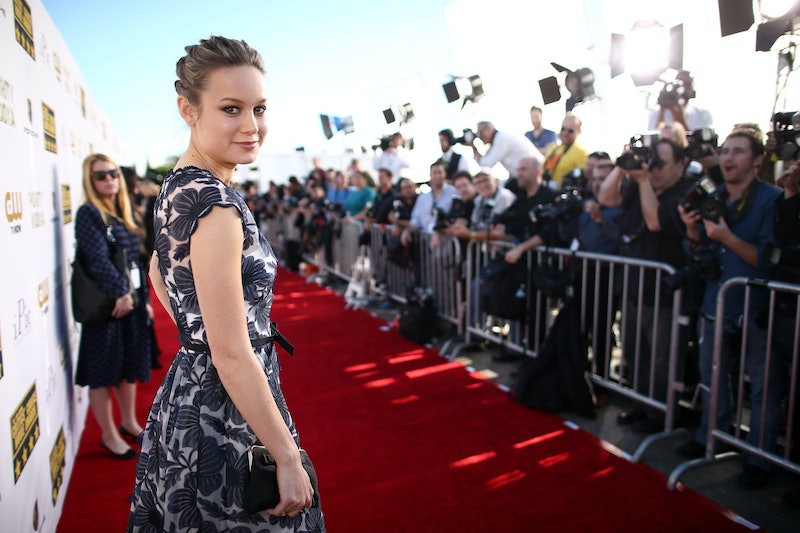 Last week, I walked into the movie theater and welcomed a new favorite gem into my life: Amy Schumer's Trainwreck. I admit, I wasn't a Schumer fan initially (just because I didn't feel I had any more space to fangirl anyone else); but it's safe to say that that has officially changed. I loved Trainwreck, and all of the lessons it taught me— from just being yourself to not being afraid to sob and laugh uncontrollably in a theater surrounded by strangers. But I also love that it spotlighted some new faces: like Brie Larson, who plays Schumer's sister, Kim in the film. Her understated, yet pitch-perfect performance definitely stood out — and was a huge part of what gave the film its heart.

While Trainwreck was packed with familiar faces — from SNL alum Bill Hader to pro baller LeBron James — the actress that played Amy's younger sister, Kim, seemed to fly under many viewers' radar. One of my friends couldn't even put a name to her face at first, but I instantly recognized Larson from the 2013 film Short Term 12 , which I caught during a recent weekend Netflix binge. Personally, I thought the actress did a fantastic job as the more level-headed, yet supportive, younger sister to Trainwreck's... slightly less "together" Amy. But this isn't the first time the actress has turned in an awesome performance. It turns out, Larson has a pretty impressive resume — and a ton of other new projects ahead.

In Short Term 12, Larson stars as a supervisor at a group home for at-risk teens. After watching just one performance, I knew I was going to be a fan. What can I say? Dramatic indie flicks with female leads are kind of my thing. But although that was the first time I'd ever seen her on screen, Larson had already racked up quite a few credits in television by then. According to IMDB, Larson started studying drama at age 6, and as she told The Guardian, later moved with her family to Los Angeles, where Larson continued to hone her craft as a child actor. Sharing a bit of what those early days were like, the actress told The Guardian:

I didn't really have friends. I loved weird movies and I wore bowling shoes and I wanted to think outside of cultural norms even at that age. I went through a phase of eating dinner in the shower, because I thought, "Why don't we do that?" Then I realized, "Because it doesn't make any sense." It doesn't save any time and you can't really get into a steak and baked potato when there's water pouring on you. But my parents were very open because I wasn't interested in doing anything bad, I just wanted to do weird stuff.

In 1998, Larson booked her first real acting job for The Tonight Show With Jay Leno, performing in minor skits like "Girl Scout," according to IMDB. In the years that followed, the now-25-year-old continued to pop up in small roles on popular network shows including Touched By An Angel, Popular, and Raising Dad. But it wasn't until 2004 that Larson landed her first true film role in 13 Going on 30, where she played "Six Chick." (OK, yeah, I don't remember that character either.)

After a few more small parts on TV series', Larson snagged a role in the indie flick Scott Pilgrim vs. the World in 2010, followed by an even more noteworthy: Kate Gregson, the daughter of Tara Gregson (aka Toni Collette) in the United States of Tara. Then came 2013's Short Term 12 and 21 Jump Street — a year that finally made Hollywood take notice. The actress soon earned her first big studio role, in 2014's The Gambler, where she co-starred with Mark Wahlberg. As Larson later shared in an interview with GQ, the switch from small indie films to big budget studio films was... well, kind of awesome:

I mean, I really loved the script and the story and the allegory of it, and the fact that it’s a studio movie, I guess, is a plus in some way, and it’s only a plus because it means that it has the time and the finances to do it right. I’m so used to doing independent film, which I love so much, but it’s like camping. It’s the difference between like staying overnight in a tent and staying overnight in a hotel.

Now that she's tearing up the big studio screens on Trainwreck, a quick look at her IMDB now reads like a who's-who of Hollywood. Larson's currently filming Weiner-Dog with Danny DeVito and Ellen Burstyn. The synopsis? According to IMBD, Weiner-Dog "chronicles the life of a dog as it travels around the country, spreading comfort and joy." (I don't know about you, but I am pretty excited about this.) She's also going to be sharing the screen with Daniel Radcliffe in Brooklyn Bridge and Donald Sutherland in Basmati Blues, amongst others. So, yeah, if Brie Larson's face looked familiar when you caught Trainwreck, but you couldn't quite put your finger on why, chances are you've probably seen her face before — and will definitely be seeing it again soon enough.