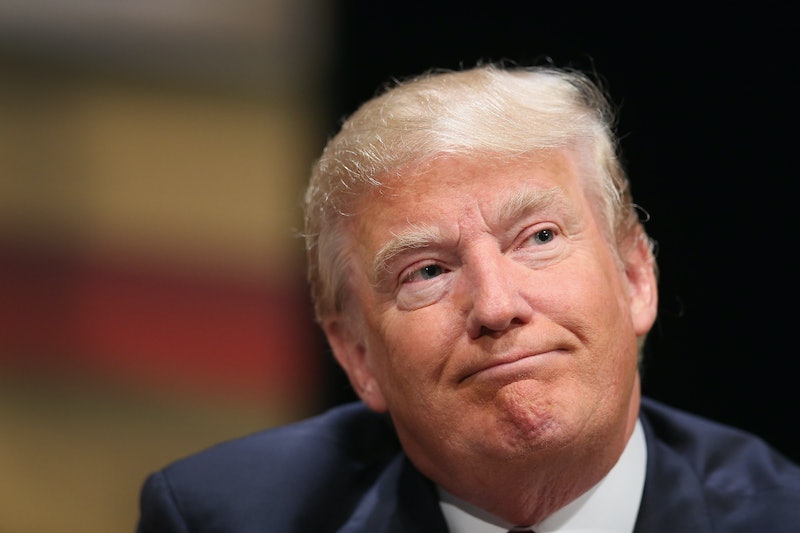 Much has been said about his unlikely shot at the Oval Office, but I think we should actually be grateful that Donald Trump is running for president. He is the candidate that dreams are made of. Young, reserved, handsome, and charismatic— not to mention his amazing hair. He comes with an impressively long background of political experience, and he is truly the candidate for the everyday American. He started at the bottom and made his way to the top.

And can we talk about his policies? What other candidate is a champion for wealth equality and social justice like Trump is? He’s willing to talk boldly about racial issues, and is full of suggestions on how to fix our broken system. And you know that he would never bend to the whims of big businesses and corporate money. Not to mention that I think he brings some much needed diversity to the arena, because white, heteronormative men are really underrepresented in D.C.

Oh wait, so that’s obviously a load of bunk. But there genuinely are some reasons to be happy and excited about the fact that Trump is running for office. If you can manage to get past the racist comments and unnecessary insults, there are a lot of silver linings to Trump’s campaign.

He Forces The Republicans To Face The Issues

Trump’s policies and statements are so out of line sometimes that the other candidates have no option but to make statements. Take immigration, for example. Republicans have finally been forced to address issues of race and immigration, which they’ve previously managed to avoid. And those who do speak out about immigration reform are forced to put forth actual concrete plans and solutions, lest they get lumped in with Trump.

I couldn’t begin to understand why Trump is doing so well in the polls right now, but he is. But the fact remains that while he may be polling well among Republicans, no one could see him as a viable candidate for the presidency, especially if he goes up against a Democratic candidate as experienced as Clinton or Sanders. If Trump wins the Republican nomination, it will be great news for liberals, because a Democratic president will almost be guaranteed.

He Gives Us A Common Enemy

When was the last time that Republicans and Democrats agreed on anything? Trump is bad for the Republican party, and they know it. They may have been content to sit back and let him spout racist nonsense, but the second he started slamming John McCain, he had gone too far. Republicans and Democrats alike flocked to McCain’s defense, and scolded Trump for his callous statements about veterans and prisoners of war. It’s so nice when we all get along.

He’s The Best Name In News

If you want a hysterical take of the day’s big news, look no farther than Trump’s Twitter feed. He has absolutely no filter on social media, and comments on everything. Even he admits it, and is proud of it. "I have many millions [of followers] between Twitter and Facebook. It's great,” Trump said during his campaign rally on Tuesday. “It's like owning a newspaper without the losses. It's incredible."

He Is Every Comedian’s Dream Come True

David Letterman said he had no regrets about retiring until he found out that Trump was running. Jon Stewart praised the comedy gods, saying, “Donald recently glided back into my life on his solid gold up-and-down people mover, cranked up the unauthorized Neil Young, opened up his crazy hole, and promised me I would never be without material again.” Trump could singlehandedly save the job of every comedian in America.

Maybe they’re only getting interested because Trump is a pathetically easy target, but hey. Beggars can’t be choosers, right?

The Democrats Can Hold Him Against The Republicans For ... Well, Forever

Hey, remember that time that half your party wanted to vote for Trump? How embarrassing. For years to come, whenever Republicans try to take a stance or get tough on issues, the Democrats are going to pop back up and remind them of Trump. And if Trump wins the nomination, the party might as well just pack their bags and go home. The Democrats will be like that friend from high school who never lets you forget about your unfortunate perm experiment.