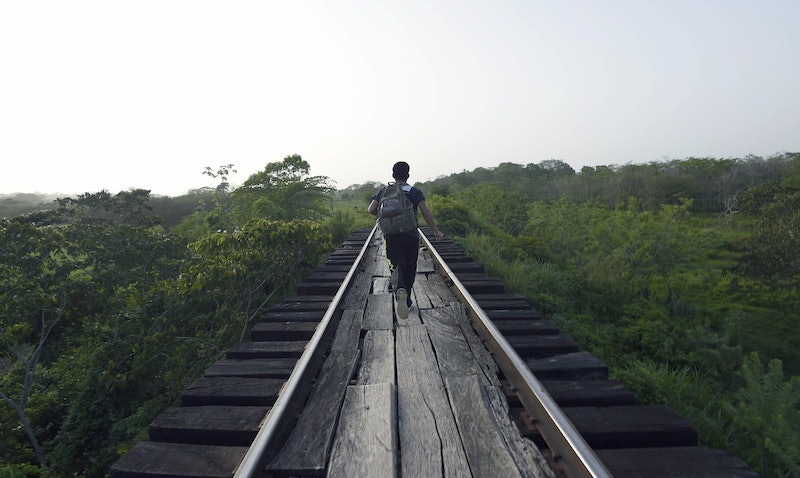 This weekend, 2016 Republican presidential candidate Donald Trump will tour the U.S.-Mexico border in Laredo, Texas, to get a "boots on the ground perspective" from Hector Garza, president of a local chapter of the National Border Patrol Council. Trump has been focusing on illegal immigration throughout his campaign, giving speeches where he called Mexican immigrants criminals and rapists and also said they are taking our jobs and "killing us," according to CNN. Trump is fueling a whole host of false stereotypes about Mexican immigrants, but doesn't seem to realize just how hurtful and detrimental they can be.

In one speech when announcing his run for president, Trump said Mexican immigrants are "bringing drugs, they're bringing crime, they're rapists," before easing up a little bit and saying "some, I assume, are good people." In a second speech, Trump wouldn't apologize for his comments, which led both Univision and NBCUniversal to stop airing the Trump-owned Miss USA and Miss Universe pageants. He said Mexican immigrants are "taking our manufacturing jobs" and "taking our money."

Nope. Of the 20 occupations that will see the most growth in the next 20 years, 12 of them only require on-the-job training, according to the Service Employees International Union. This includes jobs like home care, cleaning and janitorial services, child care, and hospitality services. Immigrants to the U.S. often work in these industries, sometimes because they don't have the funds to pursue advanced professional degrees.

Another common argument within this vein is that immigrants are the ones driving down wages for other workers. Service Employees International Union pointed out that immigrants, though, are not the real problem here. Rather, immigration laws that allow big businesses to exploit workers who lack legal status are what drive down wages for all workers. If the path to citizenship were easier for working immigrants — a reform that both Hillary Clinton and Obama have tried hard to enact — U.S. citizens, both immigrants and native-born— could force businesses to raise wages and thus living standards.

Uh, still no. Last summer, unaccompanied children were carried across the U.S.-Mexico border into Texas. In order to prevent them from staying and provide a strong reason for their deportation, anti-immigration websites started rumors that the children — and many Mexican immigrants — carry diseases such as Ebola and dengue fever. Many of these "exotic" diseases don't even exist in the countries that immigrants are coming from, and doctors were quick to point out just how unfounded and ridiculous the claims are.

Arthur Caplan, director of the Division of Medical Ethics at New York University's Langone Medical Center, told NBC News that the rumors stemmed more from an anti-immigrant fear tactic than from any kind of reality:

There is a long, sad and shameful tradition in the United States in using fear of disease, contagion and contamination to stigmatize immigrants and foreigners. Sadly, this letter which rests firmly on innuendo and fear-mongering proudly continues this unethical tradition.

Again. No. Trump's claims that Mexican immigrants are mostly criminals are just false. Though data on immigrant crime is incomplete, The Washington Post found that first-generation immigrants are actually "predisposed to lower crime rates" than native-born Americans. Further, a 2010 Census report found that 1.6 percent of immigrant males ages 18 to 39 were incarcerated, compared to 3.3 percent of native-born males in the same age group. There is also little overlap between aggravated felons and undocumented immigrants.

Specifically, to dispel the rapists and drug traffickers myth, data from the U.S. Sentencing Commission — which Trump's campaign actually cited — found that 76 percent of immigrant crime was related to immigration status. Of total primary offenses for all immigrants (not even just Mexican immigrants) 17.6 percent were drug-trafficking related and 3.8 percent were sex abuse offenses. Marc Rosenblum, deputy director of the U.S. Immigration Policy Program at the Migration Policy Institute, a non-partisan think tank, told the Post that immigrants, especially undocumented immigrants, have a huge incentive not to commit crimes:

Immigrants in general — unauthorized immigrants in particular — are a self-selected group who generally come to the U.S. to work. And once they're here, most of them want to keep their nose down and do their business, and they're sensitive to the fact that they're vulnerable.

Uh, of course they can — any immigrant group can. This kind of contradicts the whole "immigrants are taking our jobs" argument, but it still isn't true. Legal immigrants have actually had a huge role in innovation and the creation of new businesses. For example, Yahoo, eBay, and Google were all founded by immigrants. Further, the SEIU cited U.S. Census analysis by the Immigration Policy Center that found that "in 2002, 1.6 million Hispanic-owned firms provided jobs to 1.5 million employees, had receipts of $222 billion, and generated payroll of $36.7 billion."

Seriously, Donald Trump. Get it together and get informed.

More like this
Why You're Seeing Green Bandanas At Abortion Rights Protests
By Lexi Inks
5 Ways To Stand In Solidarity With Women In America From The UK
By Sophie McEvoy
How To Fight For Reproductive Rights, Based On How Much Time You Have
By Courtney Young
Juneteenth Is Now A Federal Holiday — Here's What That Means
By Lani Seelinger and Syeda Khaula Saad
Get Even More From Bustle — Sign Up For The Newsletter