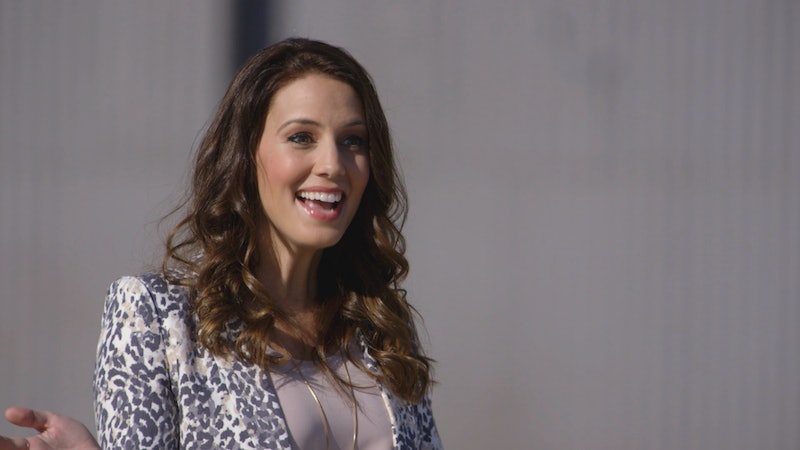 My cousins are twins, and they would often tell me about the little coincidences in their lives. One time, they each walked into the same store and bought the same shirt as a birthday present for the same person — while they were in two separate states. This continues even into their adult years, and it always made me jealous. But is "twin-tuition" a real thing? VH1 seeks to get to the bottom of it with its new show, Twinning, which premieres on July 22. Twelve pairs of twins will compete — separately — in various challenges to win a twin-appropriate prize of $222,222.22. But who is Twinning host Angie Greenup, and what makes her worthy to judge?

Let's get this out of the way first: Greenup is not a twin. I don't know if VH1 thought that having twins host a show where twins compete would be too confusing, but they went with someone who doesn't know what it's like to share a birthday with a sibling. So, if she's not spending her time honing her mental psychic-twin powers, what has she been doing? A lot of hosting, among other things. Here's what you need to know about Angie Greenup.

Her channel title, Love, Food & Money, pretty much says it all: She records videos about love, food, and money. Some sample topics she's covered, in reverse order to make things interesting: "My Mini Bedroom Makeover for Under 1,000" (sounds good!), "The Top 20 Wine Faux Pas You Might Be Committing" (20??), and "Is Ikea Bad For Your Relationship" (um, definitely). So far, she has more than 4,000 followers, but that's sure to grow after Twinning.

She's No Stranger to Hosting Outside Of Youtube Either

If Greenup looks familiar, it's because you might have seen her on one of those (many) other hosting gigs. Her longest stint was on G4's It's Effin' Science , a spin-off of Attack of the Show that featured offbeat science experiments. But she's also used her hosting powers on Attack of the Show itself, In the Name of Science, Smash Cuts, and Jobs of the Damned.

He must have plenty of achievements to his name, by my favorite is that he's the co-creator of the Kickstarter-based Emoji Card Game (which you can still fund now if you want — you know you have the emoji skills to win).

She's Obsessed With Her Dogs

But with those cuties, who wouldn't be?