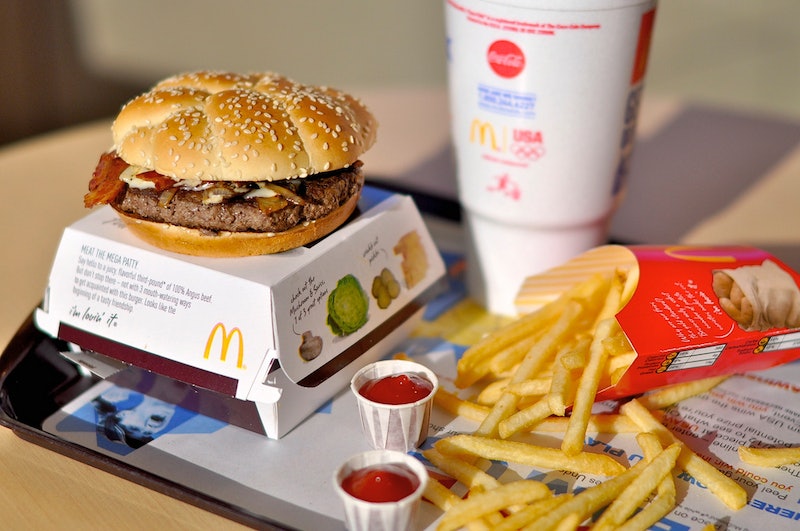 The McCat is out of the McBag: McDonald's has a secret menu that you can order off of, filled with options that range from the relatively mundane (like the Mc10:35, which is an Egg McMuffin with two McDouble patties inside of it) to the completely outrageous (like the Monster Mac, which is just, y'know, a normal Big Mac except it has eight patties in it). But how much does the McDonald's secret menu cost? The whole idea that underpins any secret menu is that you're utilizing combinations of ingredients from across a traditional menu in order to customize a dish into exactly what you want. This freedom is huge, and provides you with seemingly endless options, but the flip side of that liberty is that the prices of secret menu dishes can vary wildly.

Interestingly, customization is only one reason that secret menu prices aren't stable. You might not know this, but McDonald's prices (like almost any franchise restaurant) aren't consistent from location to location, because in some markets, the restaurants are just more expensive to run. The cost of ingredients and labor in a particular location gets reflected in the price of your food, a phenomenon that the Economist capitalized on when building an interactive-tool called the "Big Mac Index" back in 1986. The index is a sort of tongue-in-cheek demonstration of the economic principle that the relative price of something around the world is indicative of the strength of various currencies. For example, when the average price of a Big Mac is $4.79 in America, and $2.74 in China, the takeaway is that the yuan is undervalued by 43 percent.

The Big Mac Index (can this be what we mean when we talk about BMI from now on?) is actually a really popular method for teaching this particular aspect of economics, because it's relatable and — sorry I have to use this word — digestible. It's actually spawned a spinoff called the Quarter Pounder Index, which uses the exact same principle to establish the relative price of living in various U.S. cities using the Quarter Pounder as the reference point. For example, the index has ascertained that living in Juneau, Alaska is almost twice as expensive as living in Conway, Arkansas, because the price of a Quarter Pounder (with cheese, of course) is $4.82 and $2.24 in each location, respectively.

Sorry — I got carried away talking about economics when we're really here to talk about food. But my point is that, while we can estimate the price of each McDonald's secret menu item, it's going to cary depending on where you are. So, without further ado (or further econ jargon), here are 10 secret menu items and approximately how much they'll set you back.

The All-American Burger is just a hamburger with ketchup and pickles (no onions or mustard or anything), and comes in at just $1.

This is a time-sensitive indulgence, since you have to order it during the changeover between breakfast and lunch (or do you? McDonald's all-day breakfast is steadily approaching!) — but if you ask for it at the right moment, you're really just asking for a McChicken ($1) in the middle of a Bacon, Egg and Cheese McGriddle ($3.29).

My delicate sensibilities are offended by the name of this sandwich, but I have to say, it's a pretty good deal. A McChicken ($1) sandwiched between the two patties of a McDouble ($1) means you're getting this sandwich for an easy $2.

See, this one has a totally inoffensive name — and it's an easy way to maximize the protein in your sandwich, too. Ask for a Big Mac with Quarter Pounder patties instead of the normal sized burgers, and it should come out to around $4.49.

I feel like this one should be more expensive than it is. It's a Big Mac with eight patties (and eight slices of cheese, if you want 'em), and it comes out to $6.49.

If you're really in the mood for something vegetarian (I should mention that the fries are not a vegetarian option at McD's), ask for a grilled cheese, which is just cheese between two grilled buns.

McDonald's will have you believe that when you're ordering a shake your flavor options are chocolate, vanilla, or strawberry. But true experts know that you also have a third option, which is chocolate, vanilla, and strawberry, aka Neapolitan. The tri-flavored shake shouldn't cost you more than a traditional shake, so a small should be $2.19, a medium $2.59, and a large $2.99. You can also ask them to mix up their seasonal shakes, like strawberry-eggnog or chocolate shamrock shake (which I recommend spiked with creme de menthe).

More like this
10 Pumpkin Recipes That Are Way More Creative Than Pie & Lattes
By Rebecca Deczynski and Alexis Morillo
On TikTok, Tinned Fish Date Night Is The Latest Viral Food Obsession
By Emma Carey
The 8 Best Fridge Organizer Bins To Tidy Everything From Produce To Drinks
By Rachel Dunkel
20 Smart Devices Under $35 That’ll Change The Entire Vibe Of Your Home
By Emma Carey
Get Even More From Bustle — Sign Up For The Newsletter