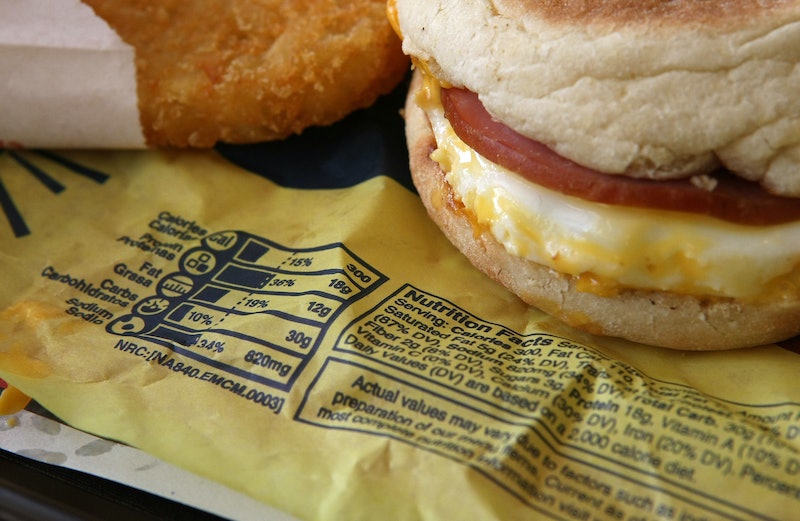 I don't know about you, but I think it's downright irresponsible that McDonald's has historically only served breakfast until 10:30 a.m. McMuffins are the world's best hangover food — but since many of us just can't drag ourselves out of bed at that ungodly hour when we're hungover, how on earth are we supposed to acquire them? However, luckily for those of us who believe in the Gospel of the Egg McMuffin, it looks like we have a tentative answer as to when all-day breakfast might arrive at McDonald's: Word on the street says it might be happening as soon as October, so things might be turning around. Note that the October date hasn't been confirmed yet ... but based on a memo recently circulated, it's looking good.

McDonald's began testing its all-day breakfast idea in San Diego back in April, in order to glean insight into whether people actually wanted hash browns all day long or if they were just saying they wanted them. After all, while all-day breakfast is one of the most common suggestions McDonald's customers make in terms of improving satisfaction, there was no way of guaranteeing that this wasn't just a case of people wanting what they can't have. The grass is always greener, and all that.

But the results are in, and the San Diego residents have spoken while the rest of us waited listlessly and had to get our all-day breakfast elsewhere. People are into all-day breakfast. We like 3 p.m. McGriddles. Who knew? (Everyone. Everyone knew that.)

Seriously, though — while the news about all-day breakfast under the golden arches hasn't been confirmed, speculation on the matter is due to a memo that McDonald's franchise owners got on Tuesday, saying that they should prepare for an all-day breakfast roll out possibly occurring in October. The memo came courtesy of LeAnn Richards, a Tucson, AZ franchisee who is leading the all-day breakfast task force.

I did not make up that task force thing, by the way. That's actually the initiative that Richards is in charge of, and yes, it does sound like the name of the coolest superhero group ever. The All-Day Breakfast Task Force: fighting crime, one afternoon McGriddle at a time.

While the results of the San Diego all-day breakfast experiment are promising, and have led franchisees to have to prepare for the possibility of all-day breakfast, there are still some hurdles to jump between where things stand now and you being able to get an any-hour McMuffin. Various franchise owners and committees still have to approve the idea, because it's not quite as simple as it sounds.

The reason that all-day breakfast hasn't always been a thing is that most McDonald's restaurants simply don't have the grill space to be making McMuffins and Hotcakes while simultaneously filling orders for burgers and sandwiches. Even when McD's made literally every stoner's dream come true and served all-day breakfast on 4/20, not every item on the menu was available for this reason (not to point fingers, but biscuits weren't available all day, and people were not happy about it). Hopefully, that's a problem that franchise owners will be able to overcome. Anything in the name of all-day breakfast — that's my motto.

So that's all we know for now. Franchise owners got a memo saying that they should be prepared to roll out all-day breakfast menus potentially starting in October. No word yet on whether the entire menu would be available, or if just some items would be. We will, of course, update as we get further details. Stay tuned.