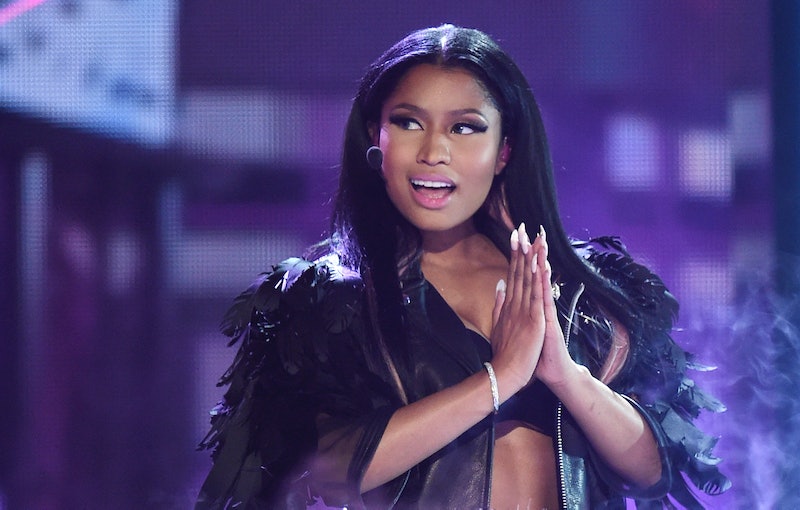 Nicki Minaj and Taylor Swift: "bad blood" or nah? That seems to be the question on everyone's minds following the announcement of the MTV Video Music Awards nominations on July 21. Minaj and Swift appeared to be briefly feuding — or at the very least, exchanging some tense words — on Twitter after the announcement. Though things appear to have calmed down between the two performers (for now, anyway), everyone seems to be choosing sides, as if this is some kind of "cat fight" in the schoolyard. But it is worth questioning why we are talking about the fight itself when we probably should be talking more about the social issues the performers bring up related to race, size, and gender.

For some background: The video for Swift's "Bad Blood" was nominated for Video of the Year, the biggest award of the night, while the one for Minaj's "Anaconda" was not. The rapper, who is rarely shy about voicing her opinion, took to Twitter to say, "If your video celebrates women with very slim bodies, you will be nominated for vid of the year." Though the rapper did not name names, Swift responded as such: "@NICKIMINAJ I've done nothing but love & support you. It's unlike you to pit women against each other. Maybe one of the men took your slot." Then, Minaj shifted the conversation from size to race and raised the issue of black women not getting enough credit for their influence in pop culture. She responded to Swift with, "Huh? U must not be reading my tweets. Didn't say a word about u. I love u just as much. But u should speak on this. @TaylorSwift13."

First of all, it is worthwhile to remember that the "Bad Blood" video is far from exclusionary. It featured a large variety of people, including women of color like Zendaya, Selena Gomez, and Serayah McNeill, as well as women of different sizes — just look at the differences between Cindy Crawford, Lena Dunham, and Hayley Williams. But on the other hand, Swift, the slender white girl, is still the star of the act, and the one officially recognized for the video — it is her song, after all.

As for Minaj's video, it is not as if it was not nominated for any VMA awards at all; "Anaconda" snagged two other nominations. However, it cannot be ignored that the cultural phenomenon is missing from the nominations for the award of the night. And the video did celebrate black women specifically, which is something that was clearly important to Minaj's fans, and likely helped make it the cultural phenomenon it was. Many of Minaj's fans were quick to point this out, along with the fact that she was simply speaking up for "unsung black female entertainers." Minaj retweeted many of her fans' tweets, and also sounded off alongside them:

Unfortunately, some spectators watching the feud unfold have seemed to turn this into a "who's better?" argument, which, of course, never goes anywhere.

Sadly, it is not surprising to see people focusing more on the "cat fight!" aspect of this conversation than the larger social issues at hand. After all, if there is anything the mainstream media likes more than watching successful women publicly feud, it's avoiding talking about the underlying issues we as a society have about race, gender, and size, which are just as present in the entertainment sphere.

These are all uncomfortable topics, so it is understand why people are quick to say "Team Taylor" or "Team Nicki" without taking a moment to pause and realize that this conversation is no "feud," and that neither Swift nor Minaj are necessarily "wrong" or "right." Their conversation is simply a part of a larger one, and it can never be eased by not talking about it.