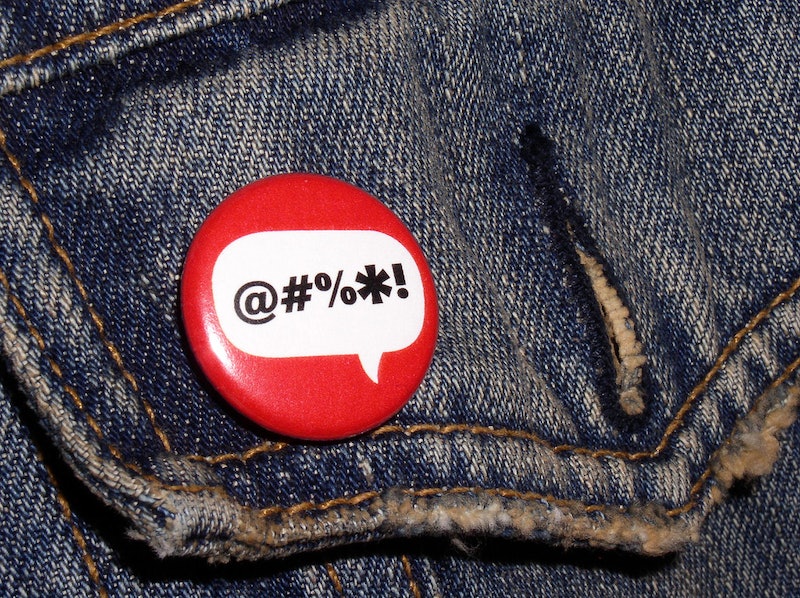 Swearing might not always be the most polite thing to do, but there are times when letting out an angry string of obscene, profane syllables feels like the best thing in the world. And we’re not just imagining those good feelings: Scientists report that swearing is good for us (Fuck yeah!), A 2009 study, for example, had subjects dip their hands in icy water; Those who were allowed to swear were able to keep their hands in the water for longer and experienced less pain than those who had to stick to a friendlier vocabulary. The origins of swear words are varied, but, unsurprisingly, most are related to bodily functions and body parts. Others have religious connections. (Where I live in Quebec, there’s actually a whole category of swear words related to the Catholic Church. For example, the word “Tabarnac” ­— French for the innocuous English word “tabernacle” — here means “Fuck!” The more you know, right?)

Every culture has it’s favorite swear words. In the U.S., we really love the 7 listed below; According to a 2013 study by Slate, the most popular curse words used on Facebook are “shit,” followed by “fuck,” "damn," and "bitch." The rest of these words make the top 15. Read on for the origins of these uniquely satisfying words, so that next time you find yourself yelling, “@#%$&@$#$%@&!!!!!”, you’ll know exactly what you’re talking about.

According to Melissa Mohr, author of Holy Sh*t: A Brief History of Swearing , the word “fuck” came from German, Swedish, and Dutch words that meant “to strike” or “to move back and forth.” The word first came into use in English in the 16th century. One of its earliest appearances (if not the earliest) was in a poem by Scottish poet William Dunbar, written before 1513. Translated into contemporary English, the verse goes:

He embraced tight, he kissed and groped, As if he were overcome with desire. Yet it seemed from his behavior he would have fucked [fukkit].

For the next few centuries, “fuck” was not used as a general swear word; Rather, it was simply a word for sexual intercourse that, Mohr suggests, came to be considered increasingly rude over time. It wasn’t until the nineteenth century that people began using “fuck” as a general indicator of anger or other extreme emotions. Mohr writes in The Huffington Post, “it took roughly three hundred years to make the transition from "he fucked her' to ‘that's fucking awesome!’”

“Shit” derives from Old English (in it’s verb form, it also has connections to early Dutch and German words). According to the Oxford English Dictionary (aka the OED and my main source of info for this post), the word “shit” began being used in the 14th century as a verb to describe the act of emptying one’s bowels, but it didn’t come into use as a noun referring to excrement until the 16th century. Around that time (1508), poet William Dunbar (the same guy from above who was one of the first to commit the word “fuck” to paper) used “shit” to refer to an annoying/terrible person, describing someone as a “schit but wit” (a shit without wit). In the late 19th century, “shit” began to be used to refer to trash or worthless things (e.g. “This building is a piece of shit.”). In 1929, the word began to be used to refer to misfortune (as in the phrase, “We are in deep shit.”). In 1987, the word, accompanied by “the,” began to be used to mean “the best” (Example: “This party is the shit!”)

“Damn” comes from the Old French word “damner,” meaning “to condemn.” The word began being used in English in the 14th century, often in religious contexts (“damnation” still usually refers to punishment from God). According to the OED, it began being used as an expletive in the 17th century, and then as a noun (as in, “I don’t give a damn!”) in the 18th. Although “damn” seems pretty tame these days, from the 1700s to 1930, it was considered a serious piece of profanity, and was generally kept out of print.

Derived from the Old English word “assa,” “ass” originally referred to a domesticated quadruped. From the days of the ancient Greeks, asses were symbols of clumsiness and idiocy. In 1600, Shakespeare used an early version of “To make an ass of” in A Midsummer Night’s Dream , writing “This is to make an ass of me, to fright me, if they could.”

In a different usage, “ass” derives from “arse” (“ærs” in Old English), referring to the rump of an animal. “Asshole” (in reference to a jerk, as opposed to one’s anus) was first used in 1935 by poet Dylan Thomas.

Deriving from the Old English word “bicce,” meaning “female dog,” “bitch” was first used to refer to what the OED calls “a lewd or sensual woman” in 1400 or earlier; the term would eventually evolve to refer more to a “malicious or treacherous woman.” The verb form, “To bitch,” was first used to mean “to complain” in 1930.

Remember in the ‘90s when “Bitchin’!” was a cool way to say that something was awesome? Apparently that usage goes all the way back to 1957, when Frederick Kohner wrote in Gidget (yes, the novel that would spawn all of those Gidget movies), “It was a bitchen day too. The sun was out and all that, even though it was near the end of November.”

“Piss” comes from the Anglo-Norman word “pisser,” meaning “to urinate.” It has taken on quite a number of figurative uses: “To piss and moan” was first used in 1947. That year was also the first year that “piss” was used to refer to irritation or anger (as in, “I’m so pissed off!”). “To piss away” (to waste) was used as early as 1628. In the U.K. “pissed” commonly refers to being drunk, a usage that dates back to 1812.

“Douche” derives from the French word “douche,” referring to a stream or spray of water. The word began to be used to refer to vaginal cleansing in the 19th century. In the early 20th century, a “douche-bag” was, according to the OED, “a sterile receptacle for the fluid when administering a douche.” “Douchebag” began to be used as a term of derision for unpleasant people in 1967.

More like this
David Tennant’s Transformation In ITV’s 'Litvinenko' Is Astonishing
By Sophie McEvoy
35 Genius Secret Santa Gifts For Someone You Don’t Know Very Well
By Rebecca Deczynski and Lauren Grant
Here’s Your Daily Horoscope For December 2, 2022
By Mecca Woods
TikTok’s Viral Tunacado Sandwich Is The Internet’s Favorite Lunch Right Now
By Alexis Morillo
Get Even More From Bustle — Sign Up For The Newsletter