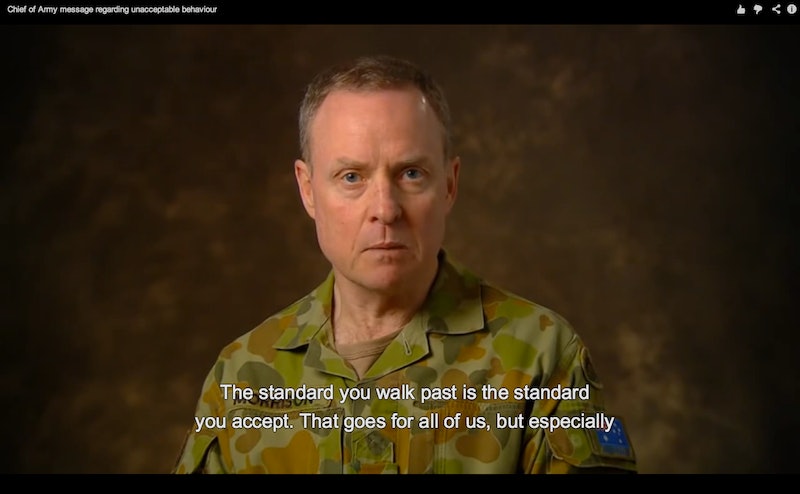 As the U.S. military struggles to deal with its sexual assault epidemic—which has included multiple allegations against commanders, record highs of reported assaults on both genders, and an onslaught of damage-control bills—the Australian military chief has released a damning message to all sex-crime assailants in his army.

"Female soldiers and officers have proven themselves worthy of the best traditions of the Australian Army," Lieutenant General David Morrison told the public in a no-holds-barred PSA. "If that does not suit you, then get out."

The message came in response to an investigation into 17 Australian servicemembers, who are charged with circulating degrading e-mails and photographs of female soldiers. "The standard you walk past," Morrison noted in the PSA, "is the standard you accept."

Back in the U.S., the Pentagon estimates there were 26,000 cases of sexual assault in 2012—up from 19,000 in 2010. This month, a sergeant in charge of sexual assault prevention was charged with sexually assaulting two soldiers, and forcing another into prostitution. The head of the Air Force's sexual assault program has also been arrested for sexual assault, as several senators have proposed bills to curb the trend.