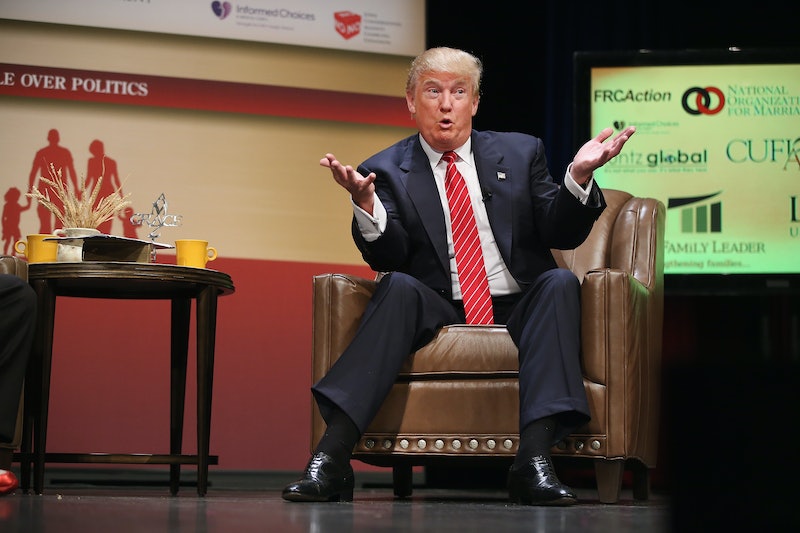 Presidential hopeful and all-around wise guy Donald Trump is set to visit the border on Thursday. He'll travel to Laredo, Texas, to take a tour of the border town with U.S. border patrol agents. While he's there, we're sure to hear more about his feelings on immigration (in case we hadn't heard enough already). Instead of hearing more of his spitfire, crass comments, though, it'd be nice if he took his time at the border to answer for some of Trump's most outrageous immigration quotes he's said in the past. I'm sure his answers wouldn't be any more politically correct than his original comments, but still…

Trump will head to Laredo on Thursday per an invitation from a chapter of the National Border Patrol Council, a union for border patrol agents. Hector Garza, the chapter's president, told CNN that the invitation does not constitute an endorsement of Trump's candidacy, but that he hopes to give Trump a "boots on the ground perspective" of life and work at the U.S.-Mexico border. Trump isn't the only candidate to receive an invitation — but his visit will probably be the most high-profile.

Given his off-the-cuff speaking style and his larger-than-life personality, there's no way to know what Trump will say while he's in Laredo. If what's he said about immigration in the past is any indication, we're in for a pretty shocking campaign stop.

1. "They're Rapists, And Some, I Assume, Are Good People"

What an approving thumbs-up for the Mexican population. This quote came from Trump's campaign announcement — and it cost him lots of partnerships, including his deal with NBC Universal. The main problem with this statement is that it shows Trump's wholly pessimistic outlook on immigration. Sure, politicians and voters on both sides of the aisle can agree that immigration policy needs reform, but Trump's "maybe there are some good immigrants" approach seems just unnecessarily offensive.

So, now, maybe it's not the Mexicans that he's worried about? Trump said this during an interview on CNN's State of the Union back in June. Again, he clearly doesn't think highly of any immigrants, almost to the point that it's dehumanizing. There are ways to oppose illegal immigration without a blanket attack on immigrants. (Raise your hand if you've ever felt personally victimized by Donald Trump.)

3. "The Wall Will Go Up, And Mexico Will Start Behaving."

Trump has promised many times over to build a wall — inexpensively — along the border. This statement, though, which he made during a Fox News segment, is indicative of more than Trump's plans to build a wall; it's indicative of his approach to foreign policy. Teddy Roosevelt advised leaders to "speak softly, and carry a big stick," but Trump is more "speak rashly and use the biggest stick you have" — not ideal for global peacekeeping.

After all of these comments, perhaps the most outrageous is that Trump thinks he'll win the Latino vote. It's hard enough for a Republican candidate to win the Latino vote, let alone a Republican candidate with a mouth like Trump. His rationale is that he will create jobs — a top priority for Latinos — but it seems like that won't be enough to overcome his offensive comments, according to polls.

In Laredo, Trump will likely talk about his plans for a great wall that will keep the rapists out. Let's just hope he lives the big stick at home.