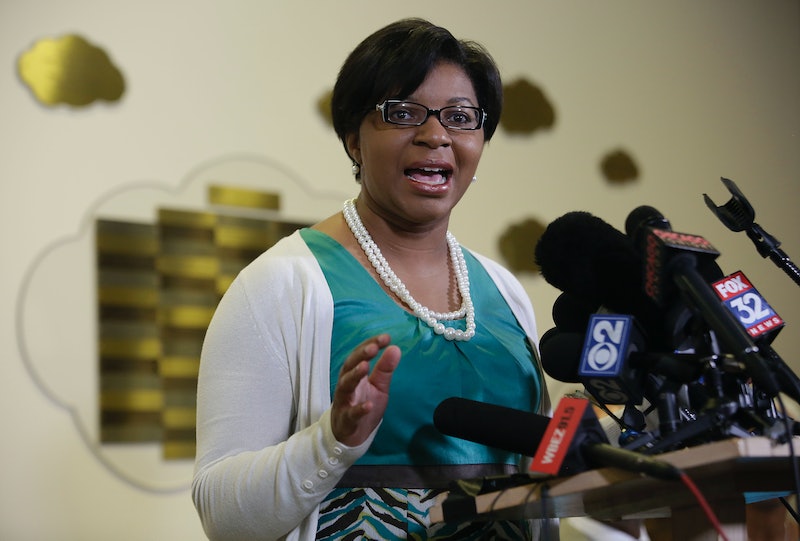 Social justice advocates and those protesting police brutality were urged to continue tweeting and using hashtags like #SayHerName to raise awareness for Sandra Bland. The 28-year-old Illinois woman was found hanging in a jail cell in Texas earlier this month, three days after being pulled over for a traffic violation. On Wednesday, Bland's sister held a press conference and insisted that the situation surrounding Bland's death was suspicious, and asked the nation to continue using social media to remember her sister.

"Please keep Tweeting, keep Facebooking, keep Instagramming ... Keep utilizing the hashtag #JusticeForSandy, keep utilizing #WhatHappenedToSandraBland. ... And my all time favorite, please keep hashtagging #SayHerName," Bland's sister Sharon Cooper said, continuing, "because the minute you forget her name, you forget her character, and that she was a person."

Bland was arrested in the beginning of July for allegedly assaulting a police officer, and was found dead in her cell three days later. Local authorities ruled the cause of death as suicide, but her family is advocating for an independent autopsy. Bland was an outspoken critic of police violence, and her family remain convinced that Bland's arrest was unjustified, but her suicide was related.

The #SayHerName hashtag was created as an offshoot of the #BlackLivesMatter movement, which Bland was deeply involved in. The intent of the movement is to raise awareness for black women and men who are killed or assaulted by police. According to the African American Policy forum, at least six black women in 2015 have been killed by police.

Rallies and protests broke out in New York City, as well as other cities across the states. In addition, social media enthusiastically responded to Cooper's call, continuing the ongoing hashtags, and furthering the #SayHerName movement.