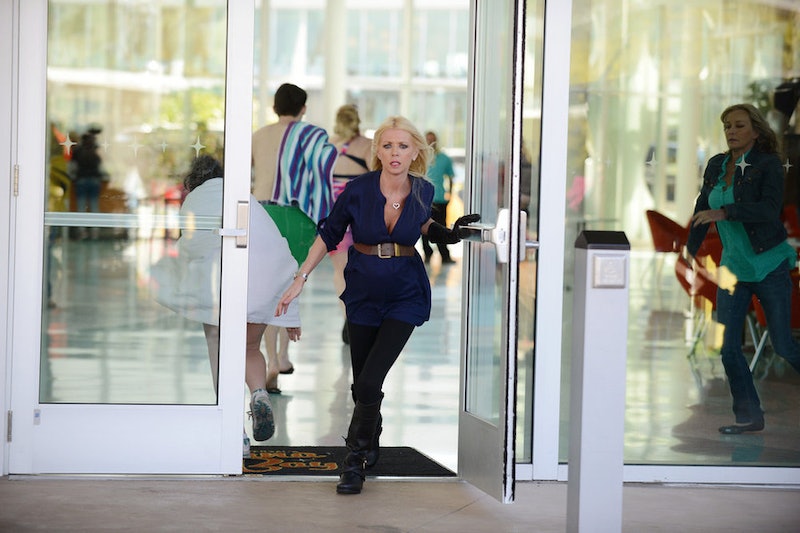 Luckily, each Sharknado movie on Syfy has promised to take ridiculousness, hilarity, and chainsaws to whole other levels, and has definitely delivered on that promise time and time again. But, Sharknado 3: Oh Hell No!, which premiered Wednesday night proved to be completely out of its world (literally). Not only did Sharknado 3 show April birthing to a baby boy while in a shark, but now the Internet must decide if Tara Reid's character April lives or dies in Sharknado 4 . After the movie ended, Syfy declared that it's up to us to vote for her fate, using the hashtags #AprilLives or #AprilDies, or simply visiting SyFy's website.

Up until she (maybe) got taken out by part of a spaceship, it really seemed like things would be OK for the Shepard family. Fin (played by Ian Ziering) and his dad Gilbert (David Hasselhoff) defeated the sharks from space (yes, outer space) and Fin was able to return to earth. Then the movie topped sharks in space with April having a baby inside a shark and Fin pulling it out of a shark like that scene from Alien. After basking in the glow of her new baby, April goes to retrieve Fin's wings pin, and walks right into the path of a piece of space junk about to fall right on top of her. Will she live or die? It's time for us to decide.

#AprilLives Because She GAVE BIRTH IN A SHARK

And that deserves a lot of respect.

#AprilLives Because She's Got That Cool Chainsaw Hand

Which means Fin is basically married to a chainsaw (his favorite).

I must admit, they do have some chemistry.

#AprilDies & Some Weird Stuff Will Happen

Um, well, it is Sharknado, where really anything can happen. Anything.