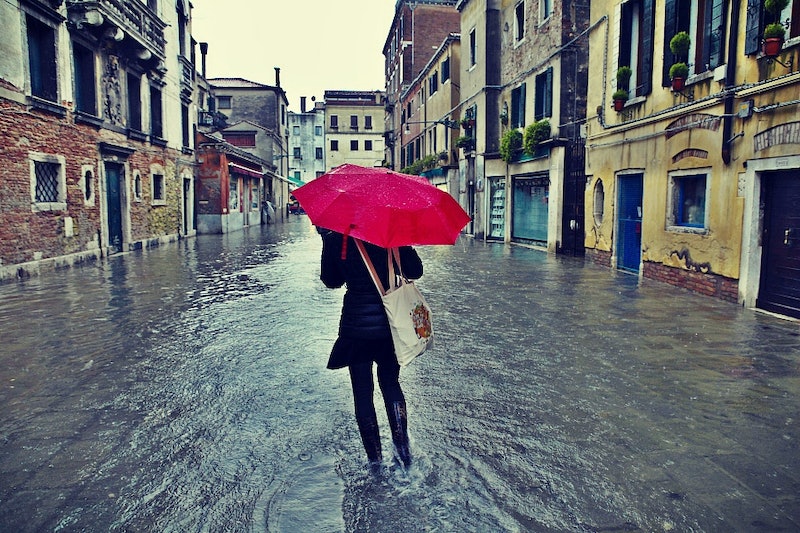 Most people are displeased when they check the weather and see a forecast for rain; whether it's pouring down while you're schlepping to work or messing up your weekend plans with a persistent drizzle, the rain isn't the most popular type of weather. I guess you could say I'm the Elsa of rainfall; not only has the rain never bothered me anyway, I actually happen to love rainy days. And though rain gets a bad rap in general, I'm not the only one who can't get enough of the mist and gloom; in fact, there's actually a name for people who love rain — pluviophiles.

I know my opinion isn't a terribly popular one, but I stand by it. As a kid I delighted in running outside to play in the puddles (OK, maybe I still do that once in awhile) and as an adult I love listening to the rain while I read or write indoors.

When I decided to move to Seattle earlier this year, many people responded, "But doesn't it rain there, like, all the time?" I told them I was looking forward to the misty weather, and they looked at me like I was slightly touched in the head (although I'm sure there could be other reasons for that). Fast forward to three months later — it has rained for a total of about five hours since I moved here, and honestly, I feel a little ripped off. I've even gotten two sunburns! Seattle, I love you and all, but it wasn't supposed to be like this. Still there's hope — rainy season kicks off in October and it better deliver.

Still need some convincing? Here are eight reasons rainy days are way more awesome than you may think.

1. They Are The Perfect Excuse To Stay In With A Good Book (Or Netflix Marathon)

For the introverts among us who prefer spending time with a good book or indulging in a Netflix marathon to heavy socializing, a rainy day is the perfect excuse to just say no to going out to a bar or, even worse, a club (*shudder*). And if we want company, it's a great way to get a friend or two to join us. All you have to do is say "Do you really want to get dressed up and do your hair, only to have it potentially wrecked by this downpour?" Works like a charm! Rain facilitates a night where you and your best friend just hang out on the couch watching movies — a.k.a. the way things were meant to be.

2. You Don't Have To Fend Off Crowds Everywhere You Go

If you're not in the mood to stay in, many places are less crowded when it rains. When I lived in New York City, I loved running in the park but hated dealing with the fact that it was constantly crowded... except on rainy days! And if you enjoy running and haven't tried going for a jog in the rain, you're totally missing out. Plus, while places like museums and movie theaters are more crowded on rainy days, it's the perfect time to brave the elements and explore the streets of your city when they're not packed with people. Get an umbrella and some sturdy rain boots and you'll have your run of the place!

Many of us love using the rain as an excuse to stay in on the weekends; unfortunately, that doesn't quite fly on workdays. However, though we may be annoyed by our water-logged commutes, we're actually more productive in the office when it's raining out. A study conducted by researchers at Harvard Business School found that on rainy days, workers complete tasks in a shorter period of time than on days when skies are blue and the sun is out. Sunny weather tends to distract workers who daydream of being outside — in fact, members of the rainy day control group were less productive when reminded of the sun by photographs or posters. Rainy days are a win-win in the office — employers get high quality work with a shorter turnaround time, and employees get work done more quickly so we can head out earlier to engage in our favorite rainy day activities.

It turns out criminals prefer to stay indoors when it rains, too. In New York City, the average number of homicides per ten days drops from seventeen to fourteen when rainfall is over an inch. And a 2011 study conducted in Glasgow found that overall crime rates drop by almost 25 percent on rainy days, with violent crimes dropping by 45 percent. So when skies are gray, we're all a bit safer (possibly because criminals have also decided they'd rather stay inside with Netflix or a good book).

5. We Couldn't Survive Without It

Even if rain isn't your favorite type of weather, it's good to remember that it's more than an inconvenience — rain is essential for human life (something to keep in mind the next time the idea of going out in the drizzle is ruining your day). The fresh water rain provides is essential to the survival of every living organism, from plants to animals to humans. Fresh water sources are depleted by the natural process of evaporation, and rainy days replace that lost water. Plus, it's just so pretty when it rains! But you can disagree with me on that point (if you must).

6. That Post-Rain Smell Is To Die For

Whether you love the rain or can't wait for it to end, many people appreciate petrichor — better known as that beautiful post-rain aroma. When it rains after a dry spell, the oils secreted by plants are released into the air. Actinomycetes, which are soil-dwelling bacteria, are also released and combine with the plant secretions. The result is that perfect scent that no sunny day can ever provide.

After splurging on my first pair of Hunter rain boots (Kate Moss and Rachel Bilson had been spotted everywhere in them, so I naturally had to own them), I awaited the next rainfall more eagerly than usual. It felt like an eternity, but I was so happy when I finally had an excuse to break out my wellies. Umbrellas, rain boots and rain jackets honestly don't get enough credit as fashionable items, but there are frankly more cute rain gear options than I could possibly afford. And they're especially fun because, even if you don't love the rain, they at least give you something to look forward to when you need to commute on a rainy day.

8. According To The Movies, Rain Is Great For Making Out

Why have so many film couples shared their most romantic moments in the rain? Because rainy weather is damn sexy weather, that's why!