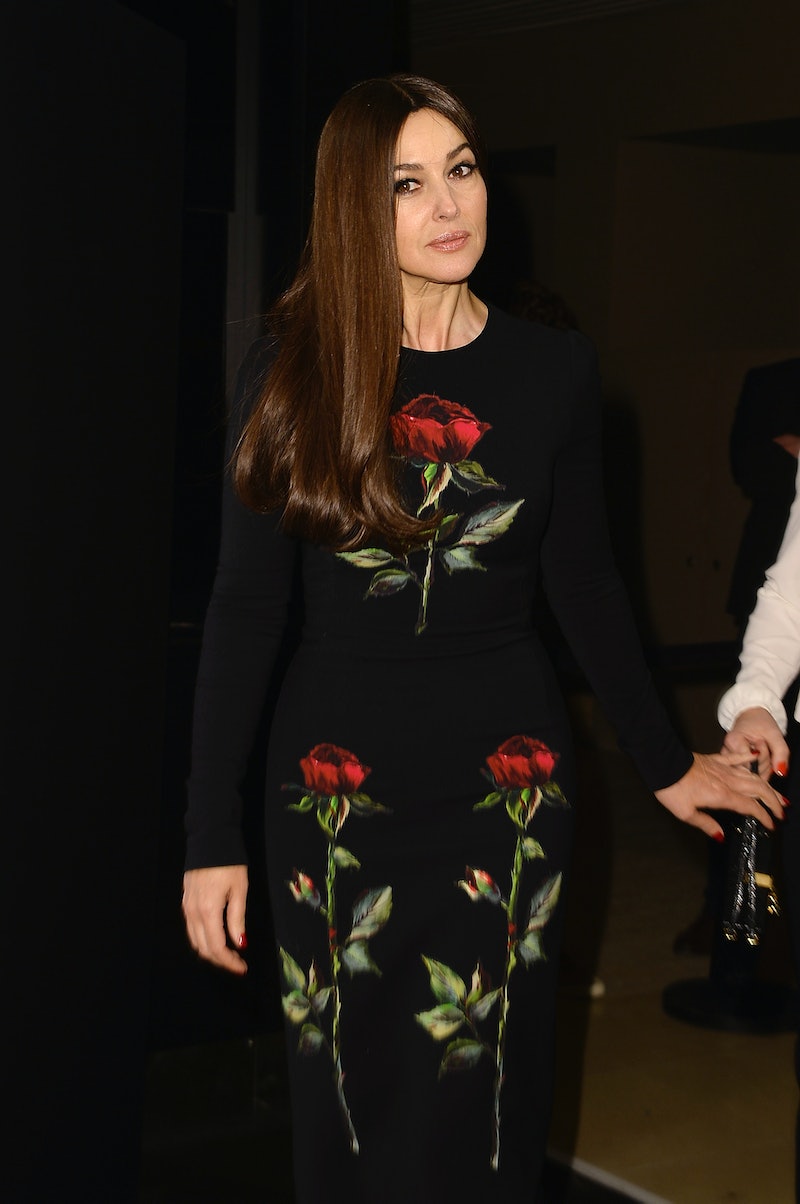 Actresses going topless on glossy magazines is pretty commonplace — it's how said actress, model, or starlet gets creative by strategically with how she poses that keeps topless mag covers interesting and artistic. Italian beauty Monica Bellucci went topless for GQ, albeit the Italian version. Magazines employ a lot of tactics to make covers memorable and that usually involves some degree of nakedness or styling the celebs so they are totally unrecognizable.

With Bellucci x GQ, she's semi-topless, as her side cleavage is popping out of her flimsy, blush slip camisole. But Bellucci's arms are placed in such a way that no nipple is exposed and she's leaning forward on her belly, further obscuring any nips. You see just enough.

The actress is effortlessly posed, with her eyes closed, as though we caught her in an intimate, post-coital moment or dozing off after a long, busy day. It's not racy or vulgar; in fact, it's suggestive without being super obvious. You can look at the image and come up with your own scenario about what's going on.

I'd also like to point out that Bellucci is 50 and she emits that Old Hollywood, Sophia Loren-inspired screen siren vibe, with her thick crop of hair, bangs, and olive-skinned beauty. Kudos to her for being classic and classy while offering the smallest peak at her cleavage.

Bellucci is breathtaking. And ups to GQ for putting her on the cover and reminding us that 50 is the new 25. Covers doesn't always need to feature new kid on the block starlets who haven't earned their keep. Offering the space to distinguished beauties who still have it is the way to go.

Ultimately, Bellucci's cover is as breathtaking as it is appropriate. Here are six other celebs who got creative while posing sans a shirt.

Bellucci's cover also reminds me of Jennifer Aniston's Rolling Stone issue from the height of her Friends heyday. Yes, her butt got all the attention. But she laid on her tummy and made sure her breasts were covered, thanks to her pose and her arms. That's some creative art direction.

Lady Gaga's Q cover featured a strategic placement of a gloved hand with elongated digits. It was alien-like and was a bit of an optical illusion, but it looked cool. So did the tentacles and spikes on her pants.

Janet Jackson's iconic Rolling Stone cover is the most famous and most clever topless pose ever, since her BF at the time used his hands as a makeshift bra.

Selena Gomez merely had to pose from the side and fold her arms to keep it PG13 for V.

Actress Cobie Smulders mimicked Sel's V cover in terms of pose for Women's Health, but they looked nothing alike in style or art direction. Both were posed to the side, wearing short shorts, and are topless. But Sel was serious and stiffly upright, while Cobie was smiling and slightly hunched. Smulders merely positioned her inner bicep over her nipple and it was sexy because of what you can't see, but can almost see.

Going topless really is an artistic endeavor, as these mag covers demonstrate.