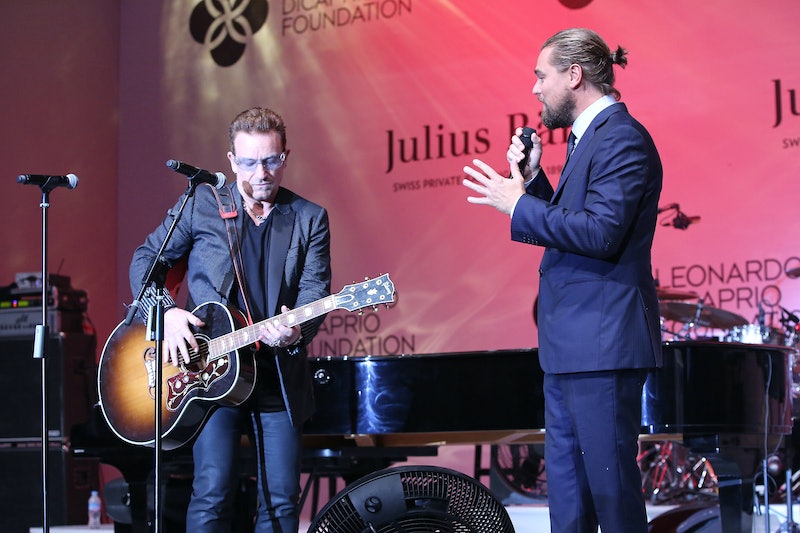 How do you get the world's top supermodels, actors, and businessmen and women to schlep all the way to the South of France for a party? That's a trick question; they need no excuse. But if they did, this week's Leonardo DiCaprio Foundation Gala and auction in St. Tropez ensured that the Riviera was as star-studded as the Mediterranean night sky. Leo's foundation was started in 1998 (to put it in terms DiCaprio fans can understand, that's the year The Man In The Iron Mask came out — you know where you were), although the gala is a relatively new fundraiser . This year's event was the second annual fête for the foundation and it was a huge success.

The auction raised $40 million through auctions like two private concerts with Elton John that pulled in $3 million together. A pair of arctic expeditions with Prince Albert II of Monaco brought $1.6 million, and a few of DiCaprio's personal items (his Rolex and artwork by Andy Warhol, for example) raked in another $2 million. A one-on-one match with Roger Federer and a seat in David Beckham's private box with the soccer star himself to watch a match at Wembley Stadium were also auctioned off.

The host, along with Orlando Bloom, Chrissy Teigen, and that hot guy she's married (aka John Legend — you may have heard of him) all wore Armani, naturally. Besides the warm and fuzzy feelings a successful fundraiser brings, the next best thing (well, besides an actual invite) is the fashion. And when the guest list reads like credits from a Vogue spread, there was no shortage of lust-worthy Pinterest board fodder.

The theme of the night for the ladies seemed to be columnlike and elegant; there were plenty of summer-in-St-Tropez shades, like cool pastels and bright whites, but those who did stick to basic black seemed to abide by the same rule — the more sheer, the better. The guys looked dashing in slim-fitting suits; Leo wore a steely grey Armani suit and man-bun as he headed up the auction.

Besides the host (and the foundations namesake), pretty much everyone was there.

There was no shortage of models, ranging from veteran supers like Naomi to stunning newcomers like Kelly Rohrbach.

Natasha Poly went classic in her trademark look: a slinky gown and slicked back hair.

Mauritian model and restaurant owner (that's not a phrase you hear every day) Alicia Rountree looked like a mermaid in a purple Zuhair Murad dress.

A casual gaggle of supermodels pose before the auction:

And lets not forget the silver screen stars.

Michelle Rodriguez donned a dress made of whatever cuttings were left from Naomi's dress, apparently.

And, of course, what's a major global fundraiser without a Bono appearance?

Here's what the star had to say about the fundraiser last night:

"Tonight’s event is about supporting LDFs efforts to protect key species like the tiger, rhino, shark, and mountain gorilla by working with governments to conserve the jungles, coral reefs and forests they call home."

No word yet on whether "the forest" he spoke of means his beard, but $40 million and the most Instagrammable party ever later, I'd say this is a massive accomplishment for the handsome philanthropist.