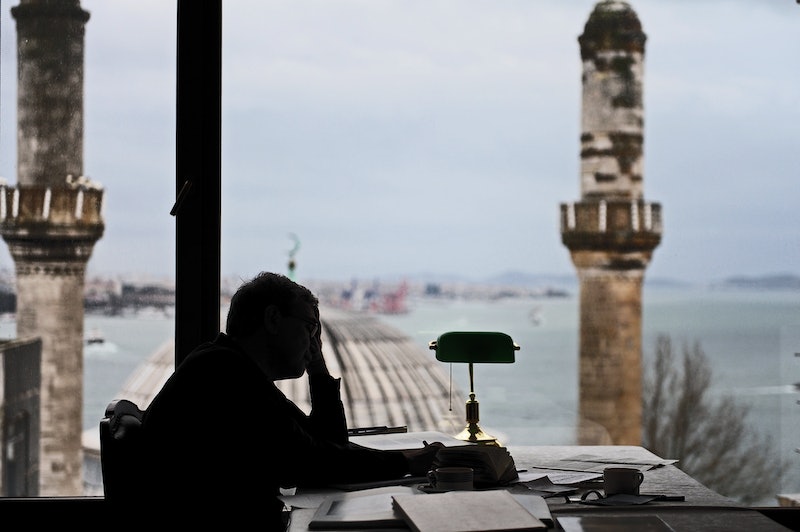 You know the classic Dolly Parton song "9 to 5" with the famous line, "Working nine to five, what a way to make a living?" Well, it turns out that working 9 a.m. to 5 p.m. might not be the way to make a living in today's world, as a new study from CareerBuilder found. According to the study, the traditional eight-hour work day is becoming a thing of the past. The company worked with Harris Poll to survey more than 1,000 people working full-time in industries that are known for their traditional nine-to-five schedules, like business, information technology, and sales.

What the survey results revealed is that more than half of workers — 63 percent — feel that working nine to five is an "outdated concept." What seems to be the new normal is never totally clocking out of the office: A common theme that arose among those surveyed was having difficulty mentally checking out of work and into social or non-work time. This showed up heavily in terms of email, specifically checking and responding to work emails outside of the office — half of workers said they check or respond to emails when they're technically off the clock. Additioanlly, almost 25 percent also said they check email when hanging out with friends and family, representing a huge shift towards constant availability in work culture today.

When it comes down to why workers are doing this, it seems to arise out of a desire to get ahead rather than a sense of obligation. 62 percent of survey respondents said checking email outside of the office was a choice they made, rather than a requirement forced on them by their employers. “Workers want more flexibility in their schedules, and with improvements in technology that enable employees to check in at any time, from anywhere, it makes sense to allow employees to work outside the traditional nine-to-five schedule,” says Rosemary Haefner, chief human resources officer of CareerBuilder. “Moving away from a nine-to-five work week may not be possible for some companies (yet), but if done right, allowing employees more freedom and flexibility with their schedules can improve morale, boost productivity and increase retention rates."

It seems that this "choice" to engage in work outside of the office may actually not be much of a choice at all, though, since work is hard for employees to stop thinking about. One in five respondents said work is the last thing they think about before going to sleep and 42 percent said it's among their first thoughts when waking up. 17 percent also said they have a hard time enjoying leisure activities because of their preoccupation with work.

Wondering how these results change when gender and age come into play? It turns out that men are more likely than women to work outside of the office, check and respond to emails when off the clock, and check in on work obligations when with friends and family. In terms of age, the results were somewhat mixed, since 50 percent of workers ages 45 to 54 brought their work home with them, compared to only 31 percent of 18-to-24-year-old workers; however, those in the younger demographic were more likely to respond to work emails outside of the office. Those who were in the 55 and above age group were more likely to perceive working outside of the office as a choice (70 percent), compared to only 56 percent of 18-to-24-year-old employees.

If you ask me, we could all use some disconnecting in our lives and time away from our smartphones and email accounts. The Harvard Business Review recommends taking a technology detox every weekend and turning off every screen you own from Friday to Saturday night. This is a great way to recharge and force yourself to take time away from your virtual office. You can also feel free to prepare in advance by printing out any maps or documents you might need and letting those who may need to get ahold of you know that you won't be on social media, email, or smartphone. So, whose committing to doing their first detox this weekend and taking a much needed break from working around the clock?

More like this
These Are The Fastest Electric Kettles You Can Buy
By Margeaux Baulch Klein
24 Funny Valentine’s Day Captions To Use No Matter Your Relationship Status
By Jessica Booth
11 Super Bowl Instagram Captions To Use On Game Day — Even If You Don’t Like Sports
By Alexis Morillo
Flip Phones Are Gen Z's Favorite New Nightlife Accessory
By Maria Santa Poggi
Get Even More From Bustle — Sign Up For The Newsletter
From hair trends to relationship advice, our daily newsletter has everything you need to sound like a person who’s on TikTok, even if you aren’t.