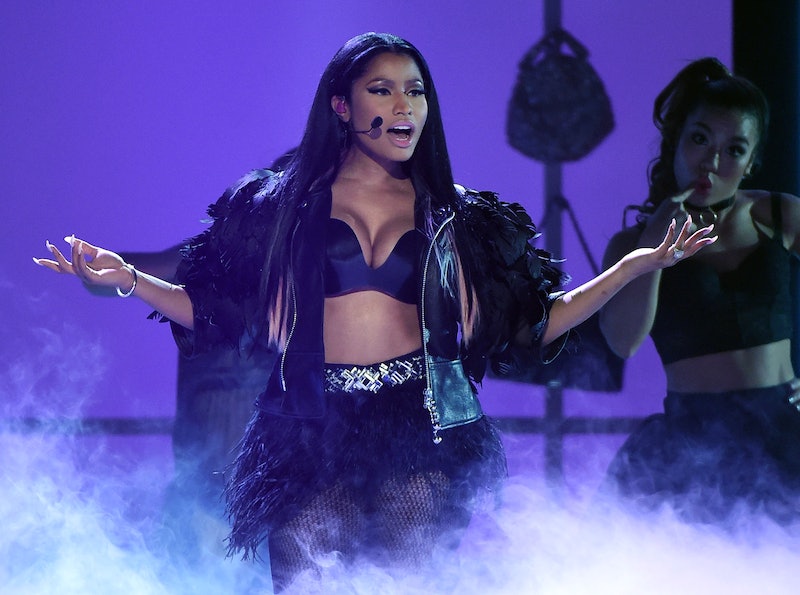 No "Bad Blood" here — at least not anymore. As reported earlier on Thursday, Taylor Swift apologized to Nicki Minaj in the wake of their "feud," tweeting, "I thought I was being called out. I missed the point, I misunderstood, then misspoke. I’m sorry, Nicki." Now, Nicki Minaj has responded to Taylor Swift, saying, "That means so much Taylor, thank you. @taylorswift13."

Minaj further showed appreciation for Swift's apology in a response to a fan who said they were happy that the two stars made up. Minaj tweeted about Swift, "I've always loved her. Everyone makes mistakes. She gained so much more respect from me. Let's move on." The rapper also made the point to show that she still has love for Katy Perry, who got in on the conversation on Wednesday, and tweeted the California Gurl a kissy face emoji. In any case, it seems like this so called social media fight between Minaj and Swift has ended with class on both sides. Hopefully, the ladies' public makeup will open more doors for a larger discussion about the social issues at hand. Because as Minaj herself has pointed out, this is so much bigger than which artist the people like more, and it is even bigger than the music itself.

As Minaj explained, black women play a huge role in contributing to pop culture, and her record-smashing, head-turning "Anaconda" video is evidence of just that. But while black women are part of so many cultural phenomenons that inspire a thousand spin-offs, memes, and covers, they often do not receive their due credit for all of their hard work. Not only is this supremely unfair, it is also long overdue for society to look into how we can make strides to fix this. Otherwise, much like with the Swift/Minaj conversation that ended up focusing on the two women, we will continue stopping these important conversations before they start.