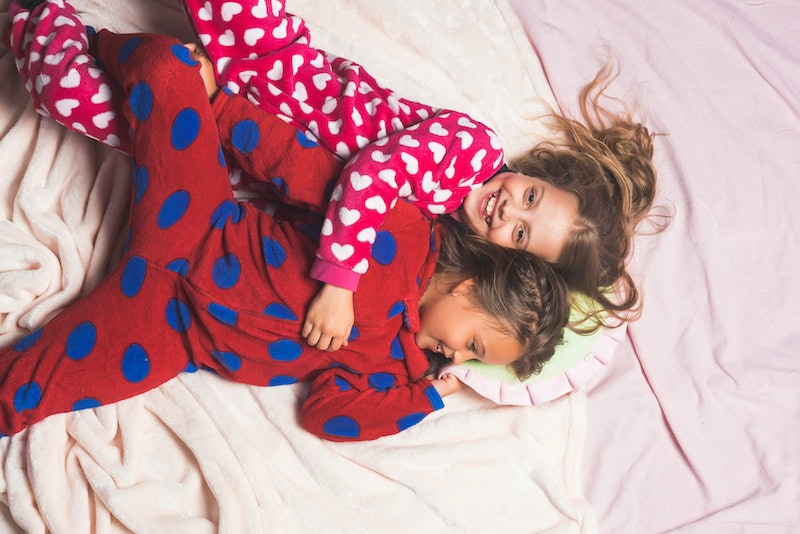 When you're a kid, there's nothing better than a sleepover with your friends. Then you go to college, which is really just one giant sleepover all the time, plus a whole bunch of other stuff on top of it all… but how do sleepovers change once you're a grownup who has entered this so-called “real world” I keep hearing about? Are they still the same?

That's the latest video from comedy duo Soren and Jolles for Pixable tackles. Appropriately called “Adult Sleepover,” it takes a cold, hard look (by which I mean a warm, hilarious look) at what the grownup version of a slumber party looks like — and you guys? It turns out there are actually a ton of common themes... just with a few twists. Party games? Still there. Phone call shenanigans? Also still there. Sad movies? Check. No boys allowed? Ditto. But it also appears that by the time we've reached adulthood, we've outgrown more than just our Ninja Turtles pajamas — and accordingly, the details of all these classic slumber party activities have changed a little bit.

Sure, adult sleepovers (and I don't mean of the sexy variety) can often be better than the ones you had as a kid for a whole host of reasons — but that doesn't mean we can't look back with nostalgia on them, or try to find some common ground with their adult equivalent. Check out a few of my favorite laugh-out-loud funny ways sleepovers grow up once you've left your childhood behind here, and scroll down to watch the full video. Don't forget to head on over to Pixable's and Tracy Soren and JessieJolles' YouTube channels for more!

As a kid: Games of “Never Have I Ever” consisted of things like, “Never have I ever… kissed a boy!” (COOTIES, Y'ALL.)

As an adult: Games of “Never Have I Ever” consist of things like, “Never have I ever… been without health insurance!” The struggle? It is real.

As a kid: Telling scary stories with a flashlight held under your chin for effect relied heavily on Scary Stories to Tell in the Dark.

As an adult: Telling scary stories with a flashlight held under you chin for effect relies heavily on your most frightening sexual encounters. My ladyparts are suitably terrified now.

As a kid: You use the phone to call up your crush and ask who they have a crush on while trying frantically to disguise your voice so they don't know it's you on the other end.

As an adult: You use the phone to call up the doctor's office and ask to book your very first therapy appointment. It's worth noting that both of these types of phone calls are easier to make when you have your friends there supporting you.

As a kid: You freak out because you're away from your parents, even though they're five minutes away.

As an adult: You freak out because you're away from your pet, even though they're five minutes away.

As an adult: You stay up as late as you can, and you guys, 10 p.m. is so late! Also, everyone goes home to sleep in their own beds, because we are too dang old to be sleeping on the floor. Our brittle bones just can't handle it.

Check out the full video below for more: