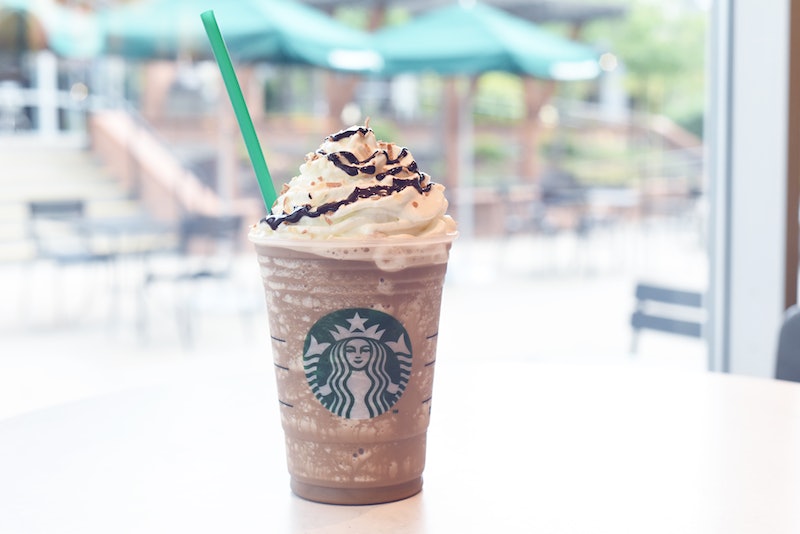 Coconut lovers, rejoice: Starbucks is bringing back the Mocha Coconut Frappuccino...again. This isn't the first time the typically limited edition drink has appeared after a lengthy absence, but hopefully, it will actually stay on the menu this time. I don't know if my heart can take another disappointment like the Great Coconut Cancellation of 2011. In fact, although I was still a bespeckled, bespotted, be-brace-faced preteen who had yet to discover caffeine back then, some may also recall the Great Coconut Cancellation of 2002 as well. The Mocha Coconut Frappuccino has something of a complicated history with Starbucks; currently, this is the drink's third go-round on the menu. Poor Mocha Coconut — all it wants is to be part of the Frappuccino Squad, but it just can't seem to make it stick.

The tropical Frappuccino is essentially a regular Mocha Frappuccino with coconut syrup and coconut flakes on top. These flakes have been the bane of coconut lovers for years; although you can kinda-sorta replicate the drink using the secret menu, the stores stop ordering the coconut flakes when the official version is taken off the menu.

But because Starbucks customers are demanding, to say the least, they didn't take this quietly. In fact, it's only thanks to the tireless efforts of people who really, really like Mocha Coconut Frappuccinos that we've seen its reinstatement to the menu today. Let's take a look at a brief history of the drink, from its roots as a humble limited-time variation on the Mocha Frappuccino to the storied dessert it has become.

While the world was captivated by the first season of American Idol and the first of what was to become many, many Spider Man movies, the Mocha Coconut Frappuccino and its caffeine-free counterpart, the Coconut Creme Frappuccino, were introduced to the Starbucks menu. After its limited-time run, however, it was taken back off the menu.

Fans clamored for the return of Mocha Coconut for years, and finally, in 2011, Starbucks answered their pleas. Unfortunately, their joy was short-lived. According to Cosmopolitan, Starbucks cruelly took it off the menu again

When MyStarbucksIdea.com was introduced, customers took to the website in droves to request the return of Mocha Coconut. Finally, their efforts paid off: Starbucks wrote on their blog (bet you didn't know they had a blog, did you?) that the high demand had an influence on bringing about its reinstatement.

Congratulations, coconut lovers! Persistence really does pay off. Let's hope that Mocha Coconut is here to stay this time.