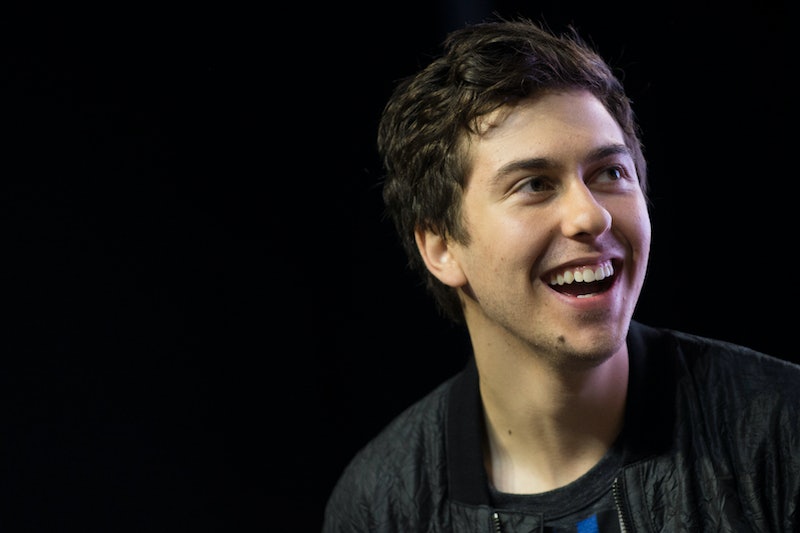 I think Nat Wolff is pretty cute, which bothers me a bit, considering he was born in 1994. But I can't help it! He's just so charming. The actor, who stars in the new film Paper Towns, has been seriously blowing up, despite being around for a while now. Wolff's first gig was in Nickelodeon's The Naked Brothers Band all the way back in 2007 (when he was 12), before nabbing a role in John Green's other adaptation, The Fault In Our Stars. But what about his personal life? Is Nat Wolff single? Not much has been known about his dating activities — until now.

Reportedly, Nat Wolff may be dating supermodel Suki Waterhouse. (Yes, that Suki Waterhouse.) Rumors first started swirling in June, after Wolff was seen leaving a Strokes concert with Waterhouse in London's Hyde Park. Although to be fair, if going to one concert with a boy means they are automatically your boyfriend, then I had at least 15 boyfriends in college (who I never saw again). But just wait, there's more: Some very persistent paparazzi also spotted the 20-year-old leaving Waterhouse's London home the next morning, and according to the Daily Mail, he "looked sheepish" as he slipped out.

Of course, the photographer could have been mistaking a look of frustration with a "sheepish" look. But honestly, if you're dating a babe like Suki Waterhouse, you should be proud!

Also in attendance at the concert? Wolff's Paper Towns co-star Cara Delevingne, who just so happens to be Waterhouse's close friend. It totally makes sense that Waterhouse and Wolff know each other by now, since apparently he's attached at the hip to Delevingne. (Here's a fun fact: Wolff didn't even know who Delevingne was before they started filming!)

As for Waterhouse's love life, she split from long-time boyfriend Bradley Cooper earlier this year, and despite never confirming that herself — probably since Waterhouse has said talking about boyfriends is "boring" — the general talk on the town is that she wanted to party too much, and Cooper wasn't down with that. (Hmm... maybe going for a younger BF like Wolff really is what Waterhouse needs right now.)

So, maybe Wolff and Waterhouse are dating, or maybe they're just really good friends. I, for one, am hoping it's the former. Because let's be honest, these two could definitely become a power couple if they wanted to.