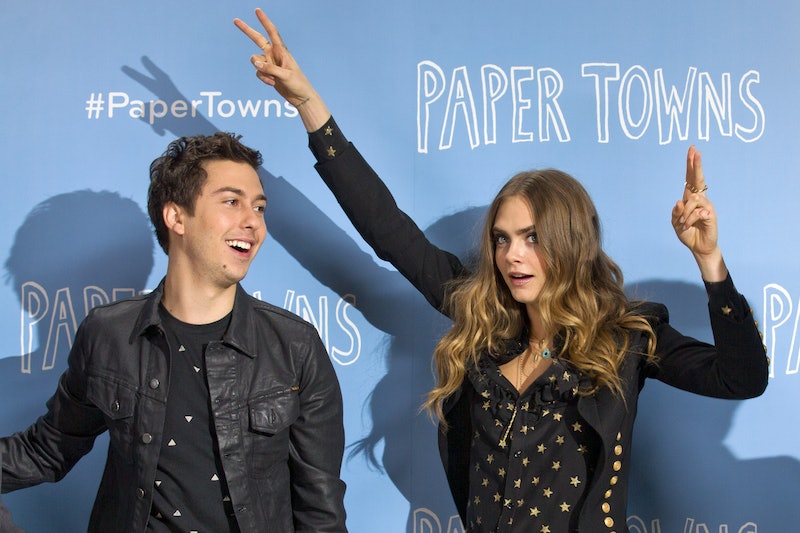 It can be hard to keep up with who's who in Hollywood (unless you're like me and it's part of your job description to know that, of course) but if you might think it would be easier if you actually were working in show business. Apparently that's not true for Nat Wolff, who had no idea who Cara Delevingne was before they auditioned for their upcoming film together. Wolff and Delevingne will co-star in the adaptation of Fault In Our Stars author John Green's Paper Towns as longtime neighbors who reconnect the night before Delevingne's character goes missing, but if Delevingne actually went missing, Wolff probably wouldn't have noticed once upon a time. Here's what he told The Hollywood Reporter of his co-star:

I was the only person on the face of the Earth that had never heard of Cara before, but when she walked in, I looked at her and said, “I think you're on a billboard outside my house.” I just thought she was some model, but then she blew me away. She's very spontaneous and crazy and that was perfect for the role. She made me really uneasy, and that was perfect for the characters.

To be fair to Wolff, Delevingne's star was still on the rise when they auditioned for Paper Towns over a year ago, and hopefully had the audition happened today he would have recognized her from, well, everywhere. It's not just the billboard behind his house that boasts Delevingne's image: it's also the upcoming supervillain flick Suicide Squad, the live-action Neverland film Pan (she's a mermaid!) and pretty much every tabloid ever. There's simply no avoiding this model slash actress these days.

Not like Wolff would want to, of course. From the looks of things, it seems that these two are tighter than ever, goofing around in interviews and just generally appreciating one another's weirdness.

And hugging it out on the red carpet...

And shooting the ~most important image~ in the Paper Towns film.

Wolff may not have known who Delevingne was then, but they're certainly tight now. I wonder if that billboard across from Wolff's house ever changed to the Paper Towns movie poster — it would only be fitting.