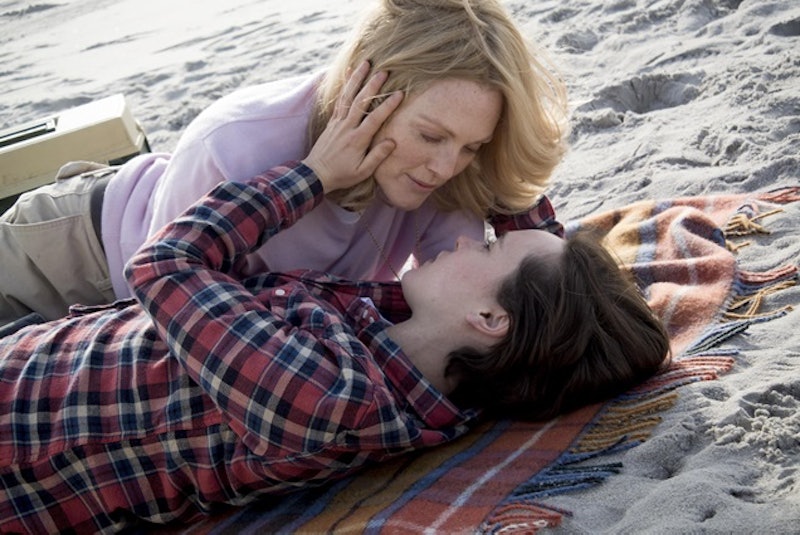 If you ask me, Julianne Moore is one of the greatest living actresses today, and Ellen Page is pretty great, too. I've watched and enjoyed pretty much all of the movies they've made, and now that they're doing one together, things just got even more amazing. In Freeheld , which is based on a true story, Moore plays New Jersey police lieutenant Laurel Hester, while Page is Hester's domestic partner Stacie Andree. The film centers on Andree's battle to secure Hester's pension after she's diagnosed with terminal cancer, and watching the new Freeheld trailer, it's clear this movie may be one of the best — not to mention one of the most important — movies either actress has done in her career.

There is, of course, power in seeing a true story brought to life on the big screen, and knowing that homosexual couples face struggles like Hester's and Andree's on a daily basis, even in 2015, is heartening (and heartbreaking). To know that you can spend so many years of your life loving someone and to be denied basic rights that heterosexual couples enjoy without thinking is an incredibly difficult pill to swallow, but without a doubt, it's a story that needs to be told, and Freeheld seems to have done so beautifully.

It seems as though there has never been a more important time for a project like Freeheld. While SCOTUS legalized gay marriage across the United States earlier this year, that doesn't mean that discrimination against same-sex couples (or gay and lesbian individuals, for that matter) has magically dissipated. Things are certainly getting better, without a doubt, but appreciating the history of the gay rights movement and the activists who have helped it along is an important puzzle piece in the acceptance game. In addition, the more realistic depictions of normal, loving couples that just so happen to be same sex are portrayed in the mainstream media, the more people are likely to see that love is indeed universal, regardless of gender.

That Moore and Page were cast as the lead actresses in Freeheld also bodes well for the film. Page, an openly gay woman, is not only a great actress, but also intimately understands the realities of the story she's portraying. Moore is undoubtedly one of the most diverse and immersive actresses who has a history of playing lesbian characters — Jules in Lisa Cholodenko's 2010 drama The Kids Are All Right comes to mind — with grace and sincerity. Having them come together in this movie is one of the most perfect casting decisions I've ever seen.

Freeheld won't hit theaters until October, but we can likely expect to see it picking up plenty of award nominations at next year's Oscars, especially if the early critical response is anything to go by. I'm looking forward to seeing Hester and Andree's experience brought to life, and to celebrate the love and dedication these women shared and the difference they made for same-sex partners everywhere.

Watch the full trailer for Freeheld below, and try not to cry.