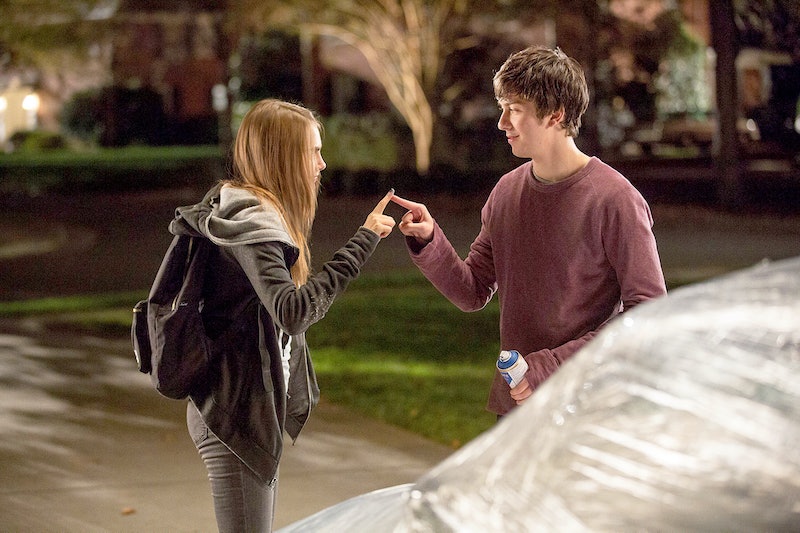 A book is a different beast than a film, but when adaptations are involved, fans' feelings are bound to get hurt. It's an impossibility to keep things the same in the transition: One medium is meant for the page, while the other is meant to be viewed visually, without text. In the cast of John Green's latest adaptation, Paper Towns, there were definite changes. (Spoilers ahead). For one, Sea World doesn't make the cut. In the novel, our protagonists Margo and Quentin break into the park, but in the movie, it isn't mentioned. The reason for this is obvious: “No one was anxious to pay Sea World for the chance to give them good publicity," Green explained on YouTube.

But small adjustments, like keeping Sea World out of the equation, didn't tarnish the integrity of the story, according to director Jake Schreier. “I remember loving the book when I read it, but thinking that the ending was gonna be one of the toughest parts to push," he says. "When I first read the script that Scott Neustadter and Mike Weber wrote, I thought one of the most brilliant things they did was figure out a way to restructure the film to give it somewhere to go after Q and Margo part. I felt like they touched on all of the beats that the old ending had and then gave it somewhere to go after that, and I felt the structure of it was brilliant.”

Author John Green echoes these claims, saying he was on board with the changes from day 1. "At the center of the story for me is learning to imagine other people complexly, and the sort of challenge that we have of being stuck inside of the prison of self. Like, I can never get out of my consciousness," he explains. "I can never occupy another person’s mind, and so I have to learn to listen to them better so that I can understand them more complexly. That’s what I wanted to have happen at that ending, and I think that hopefully we see that.”

The film's star Nat Wolff hopes the slightly altered ending will appeal to fans. “I just felt like when I read the book, the feeling that I got at the end is the same feeling that I got at the end of the movie," the 20-year-old says. "And obviously movies and book, and things have to be shifted and changed, but I feel like that was the main goal, and I felt like Jake [Schreier] and everybody achieved that.”

More like this
10 Must-Read New Books Out This Week
By K.W. Colyard
'Derry Girls’ Dylan Llewellyn Will Star In C4’s New Queer Comedy
By Rachel Mantock
A 'Bridgerton' Star Just Dropped A Major Hint About Joining The Live-Action Barbie Cast
By Bustle UK
What Makes A Sally Rooney Sex Scene So Hot?
By Samantha Leach
Get Even More From Bustle — Sign Up For The Newsletter