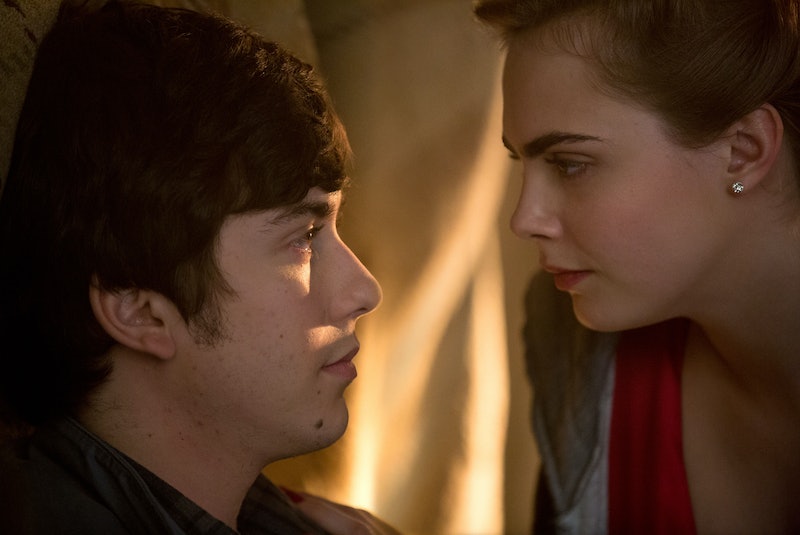 Much like the character Margo leaves hidden clues to let people know her whereabouts in Paper Towns, the movie itself gives the audience a nice little trail of pop culture references for us to nibble on throughout the entire film. John Green enjoys cleverly placing nods and references to TV, film, books and other bits of pop culture in all of his uber successful novels — and Paper Towns isn't any different. It only makes sense that the movie adaptation of Paper Towns includes pop culture references galore, as well — even if some of them weren't in the book.

The title of the movie itself is an obscure pop culture reference. Green defined a paper town in a Vlogbrothers video, saying that it's a fictitious entry created by mapmakers on their maps to prevent people from copying them. In other words, it's a fake town. It seems that Green really enjoys making this pop culture deep cuts, because he has gone on record saying that in The Fault in Our Stars, he slipped in some references to the literary classic, The Great Gatsby. USA Today reports that in the book, Green writes about a green light in Amsterdam and a green car — both of which are analogous to the blinking green lights in Fitzgerald's famous book. Clever, right? Green keeps the shout-outs coming up in Paper Towns — here are 11 pop culture references to look out for while watching his latest film.

At the top of the list is a very special part of the movie where Q, Ben and Radar break into song to overcome their fear — and it's not just any song, but the Pokemon theme song. It's probably going to be the most talked-about part of the movie, and for good reason.

Q's best friend is honest. All the time. It's as endearing as it is awkward, and at one point of the movie, he just spills his guts to his girlfriend Angela and he admits that he claimed to like an Ed Sheeran song when he really didn't. But it was all out of love for his boo.

The band's cameo comes in the form of a poster in Q's room and it not only builds his character, but also gives a nod to the song "Game Shows Touch Our Lives," which is quoted at the beginning of Paper Towns.

One of the first clues that Margo leaves is an image of Woody Guthrie where he has the words, "This machine killed fascists" written on his guitar in 1941.

5. Ben's Ode To Game of Thrones

In a drunken stupor, Ben shouts the words, "valar morghulis" which translates to "all men must die" in High Valaryian, a language from the Game of Thrones universe.

6. A Cameo From A Familiar Face

I don't know if there's a crossover between the worlds of The Fault in Our Stars and Paper Towns that I didn't know about, but there was a very special cameo in the movie from none other than Ansel Elgort.

This fictitious crowd-sourced Internet information destination is the movie equivalent of Wikipedia.

In another Margo clue, Q is led to "Song of Myself," a poem in Leaves of Grass by Whitman — one of Green's inspirations in writing the book.

Everyone remembers the first movie they ever snuck into. In one scene, Q, Ben and Radar reminisce about how this Cuba Gooding Jr. classic was theirs.

Radar's parents are building the world's biggest collection of black Santa Clauses to be in the Guinness Book of World Records. It's written in the book, but the movie makes it come alive.

During a convenient store run on their journey to New York, the gang blindly grabs some T shirts to change into. Ben is given one that says, "World's Best Grandma" and Radar (who's black) is given one that says "Heritage Not Hate" wit an image of the confederate Flag. It's a timely tongue-in-cheek joke.

Did you catch all of these during Paper Towns?