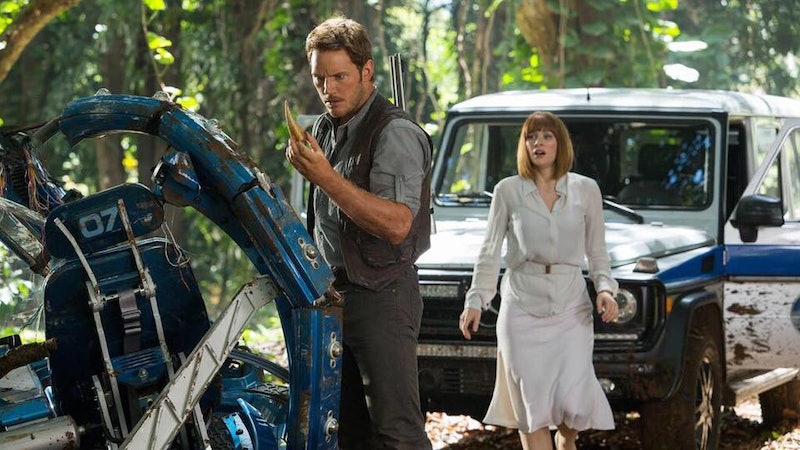 The first thing I said when the credits started rolling at the end of Jurassic World — aside from “THAT WAS AWESOME,” because it was — was, “Wait a minute. What about all those embryos?” Remember, the ones that Dr. Henry Wu took off the island in order to preserve the research he was doing on genetically modifying dinosaurs to be used as weapons? Welp, turns out I may get the answer to that question very soon, and it's possible those embryos are going to make one hell of a sequel: On Thursday, news broke that the sequel to Jurassic World is happening, and it’s going to be released on June 22, 2018. Way to make it official, Universal!

Even better: In addition to the amazing news that the Jurassic World sequel is already sending out save-the-dates via social media announcements, it was also revealed that Chris Pratt and Bryce Dallas Howard have both signed on to return.

OH MY GOD. IT’S ALL HAPPENING.

The news is almost too exciting for me to think about anything else, but I did manage to find time to at least wonder what the sequel will be about. I mean, considering the gaping plot hole those “rescued” embryos left in Jurassic World, I’m putting every single penny in my pocket on the script having something to do with Dr. Wu and his genetically modified dinosaur weapons. Because what’s better than regular dinosaurs? SOLDIER DINOSAURS. (Please let them dress a T-Rex in chain mail!)

However far they decide to take the whole dinosaur soldier thing, though, you can count on a lot more awesome dinosaur training scenes to keep you on the edge of your seat. Because nothing is more terrifyingly awesome than watching Pratt trying to tame a wild animal that would devour him in a second if given the chance. Like, will it or won’t it eat his head this time? The anticipation is too much.

Wherever the script ends up directing its story, though, I do hope for one thing: more of an appropriately-timed political message. Genetic modification is an important topic, sure, but using dinosaurs as weapons seems a lot more compelling — and there are so many ways to relate that to the world we live in today. I’m crossing my fingers that they pull it off.

More like this
One Powerful Quote In 'Doctor Strange 2' Is Going Viral On Twitter
By Alyssa Lapid
Laura Dern Said “Cultural Awareness” Made Her Rethink This 'Jurassic Park' Fact
By Grace Wehniainen
The 'Hocus Pocus' Sequel Finally Has A Release Date & It Makes Total Sense
By Shannon Barbour and Radhika Menon
What Does Doctor Strange’s Third Eye Mean?
By Arya Roshanian
Get Even More From Bustle — Sign Up For The Newsletter