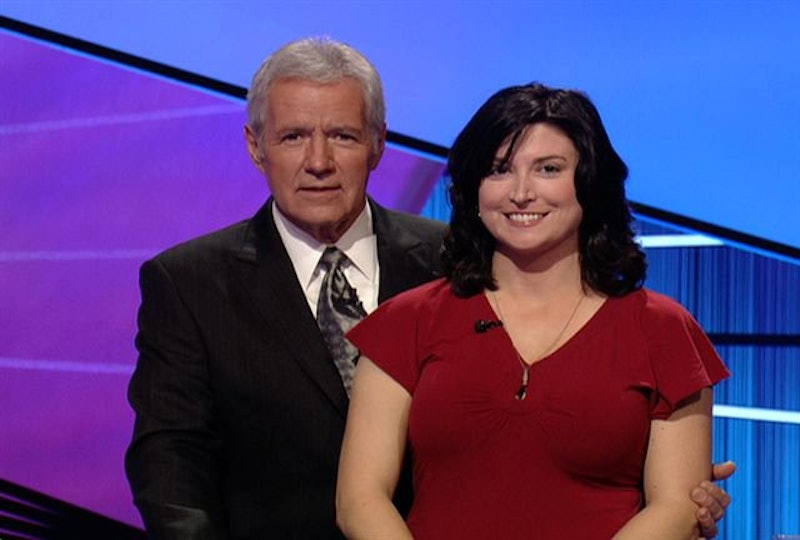 I didn't realize exactly how large my breasts had become until I appeared on Jeopardy! They hadn't always been that big — my boobs’ journey, from humble B cups to t-shirt-distending double Ds, was slow but steady. The girls received a jumpstart in size when I (unsuccessfully) underwent fertility treatments in my mid-30s. I gained weight from the hormones, most of which I eventually lost. My breasts, however, still looked as if I were expecting a baby.

I suppose I knew intellectually that my chest size had become unusually large. How could I not, with a bra size verging on DD? But in my mind's eye I was still the girl I'd been in my twenties, one who could walk into a room and turn not one head with the size of her breasts. I didn't like being the center of attention. Maybe ignoring the massive changes my body had undergone was a way of protecting myself, pretending I could still be invisible.

With that warped mindset, I taped my episode of Jeopardy! while wearing a clingy, scarlet-colored blouse I’d bought on sale at a Banana Republic outlet store. When the episode aired four months later, social media went bonkers about — as one Twitter wordsmith put it — the “chick smuggling melons on Jeopardy!” It finally sunk in that I had huge boobs. You know how you think you know how your voice sounds until you hear a tape recording of it, and then you're shocked? That's how I felt watching myself on Jeopardy! — the woman standing behind the podium with a giant chest squeezed into a skintight top couldn't possibly be me. But it was.

Surprisingly, though, my Jeopardy! appearance wasn't what made me decide to downsize. Rather, my decision was motivated by an old foe I thought I’d seen the last of decades earlier: migraines.

As any migraine sufferer will tell you, the most random things can trigger one of the blindingly painful headaches — red wine, a red-eye flight, a butterfly flapping its wings in China. For me, it was exercise. I wasn’t even engaging in any vigorous exercise, like running, or playing tennis — I was just walking, usually three miles a day. But within the first block of my walks, my bra straps would dig so deeply into my shoulders that my hands would tingle and my fingers would go numb. The shoulder pain would radiate up to my neck, and then the back of my head. By the time I would return home, I would have a headache. If I didn’t ice my neck and pound some ibuprofen, there was a good chance it would turn into a migraine.

I work from home, and it became very easy to spend the day indoors, avoiding the neck pain that wearing my bra would create, as well as the stares I felt I’d inevitably get walking around the neighborhood. It was getting to the point were I was becoming agoraphobic, developing a fear of leaving my safe little cocoon of a home.

I eventually stopped taking my walks. The lack of exercise in my day gave me the blues. I didn’t like the way my body felt or looked, even though I know that large breasts make many women feel sexy. But not me. When my husband and I met, I was happy with the way I looked. But with these changes to my breasts, I didn’t want my husband to see me naked, or to do anything with him that would involve him seeing me naked.

I realized that something needed to change, and started doing research on breast reduction surgery. I read about some famous women who’d had the procedure. Soleil Moon Frye, best known for playing the titular star of the TV show Punky Brewster as a child, underwent the surgery when she was just 15. She was quoted at the time in a People magazine article saying of her post-surgery life, “Now I can be free" — an idea that resonated with me.

And then there was Simona Halep. The 23-year-old Romanian tennis player had breast reduction surgery when she was 17, because she felt that her large chest had been dragging down her athletic performance. Before she had the surgery, she was ranked #210 in the world. She’s now #3. These women's stories resonated with me. I felt like my large breasts were also dragging me down, and damaging my quality of life.

My primary care doctor, who had been treating my headaches, referred me to a plastic surgeon. The surgeon diagnosed me with macromastia, which is a medical term meaning abnormally large breasts that contribute to chronic pain or discomfort. The consultation with my surgeon included an explanation of how much tissue he would remove, where the incisions would be, and lots and lots of photographs for my insurance company. Within a couple of weeks, his office manager called me to say my insurance would cover the surgery. I was elated and terrified at the same time.

The surgery turned out to be a lot more complex than I had anticipated. My surgeon discovered tissue containing numerous cysts he wanted biopsied. I ended up with a much smaller chest than I thought I’d have, and a much larger incision – one that covered more than half of the circumference my body, starting about three inches underneath my left armpit and ending three inches beneath the right armpit.

During my first post-op visit to see my surgeon, I was terrified to look down as he removed the surgical bra to take a look at his handiwork. I knew my breasts were still covered in stitches and surgical tape. Still in a bit of a painkiller-induced haze, I kept my eyes focused on my husband’s face, searching his expression for clues as to how I looked.

My husband and I met on a blind date. I remember walking into the restaurant and seeing him first, before he saw me. He looked bored, ready to be disappointed. When he looked up and saw me, his face broke into a wide smile mixed with surprise, relief, and delight.

He had the exact same response when my surgeon opened up my surgical bra and removed some of the bandaging. Surprise, relief, and delight.

I’m still recovering from my operation. It can take six months to a year for the swelling to completely disappear and to learn what your breasts will look like for the long haul.

I’ve adjusted to looking in the mirror and seeing a body quite different from the one I had just a few months ago. It’s no longer a body that prevents me from feeling like I can exercise, engage in social activities, or let me husband watch me as I get undressed each night before bed.

It’s a body that helps me feel sexy, healthy — and, in the words of Soleil Moon Frye — free.

More like this
Most Comfortable Underwear For Big Butts
By Audrey Williams
The Best Time To Date After A Breakup, According To Experts
By Bustle Editors
The Best Products For Under-Breast Rashes
By Andrea Pyros
Where Is Clayton Echard Now? The Former 'Bachelor' Star Is Dating Susie Evans
By Kadin Burnett
Get Even More From Bustle — Sign Up For The Newsletter